Use the OCCURS clause in the Data Division entry to define a table. The OCCURS clause eliminates the need for separate entries for repeated data items; it also supplies the information necessary for the use of subscripts or indexes. Give the table a group name, then define a subordinate item (the table element) that is to be repeated n times:

While the table element has a collective name, the individual occurrences do not have unique data-names. To refer to them, specify the data-name of the table element, together with the occurrence number of the desired item within the element. The occurring number is called a subscript, and the technique of supplying the occurrence number of individual table elements is called subscripting. A related technique, called subscripting using index-names (indexing) is also available for table references.

A subscript indicates the position of an entry- If You had a one-dimensional table called YEAR-TABLE that contained the 12 months (January through December), the subscript for January would be 1. An index is a symbol used to locate an item in a table. An index differs from a subscript in that an index is a value to be added to the address of a table to locate an item (the displacement from the beginning of the table).

To create a one-dimensional table, use one OCCURS clause. For example:

WS-ONEDIM-TABLE is the group item that contains the table. WS-EMP-TABLE names the table element of a one-dimensional table that occurs 10 times.

For all the tables, the table element definition (which includes the OCCURS clause) is subordinate to the group item that contains the table. Remember that the OCCURS clause cannot appear in a level-01 description. Tables of up to seven dimensions can be defined using this same method.

Referring to an Item in a Table

The items in a table are placed as consecutive entries in storage. The following figure shows the storage layout for the three-dimensional table WS-THREEDIM-TABLE that is defined below 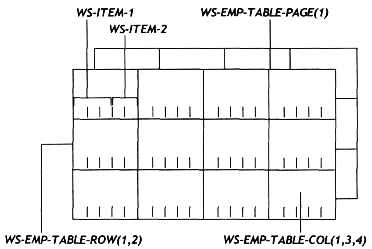 Subscripting, subscripting using index-names (indexing), or a combination of both, can be used to supply the necessary references.

If a subscript is represented by a literal and the subscripted item is of fixed length, then the compiler resolves the location of the subscripted data item within the table at compile time.

The data-name used as a variable subscript must be described as an elementary numeric integer data item. A valid, variable subscript reference to WS-TWODIM-TABLE-2 (assuming that SUB1 and SUB2 are data-names containing positive integer values within the range of the table) would be: WS-EMP-TABLE-COLUMN (SUB1 SUB2)

If a subscript is represented by a data-name, the code generated for the program resolves the location at run time. The most efficient format for data used as a variable subscript is COMPUTATIONAL (COMP) with a PICTURE size of less than five digits.

You can also refer to table elements by using an index. An index |s a displacement from the start of the table, based on the length of the table element. Use the index in SET, SEARCH, SEARCH ALL, PERFORM VARYING, or relational condition statements. An index-name must be initialized through a SET, PERFORM VARYING, or SEARCH ALL statement before it is used in a table reference. The compiler determines the index of an entry based on the following formula:

You define the index-name for a table in the INDEXED BY clause of the" OCCURS clause in the table definition. To be valid during execution, an index value must correspond to a table element occurrence of not less than 1 nor greater than the highest permissible occurrence number. This restriction applies to both direct and relative indexing.

In direct indexing, the index-name is in the form of a displacement. The value contained in the index is then calculated as the occurrence number minus 1, multiplied by the length of the individual table entry. For example:

An index can be shared among different tables. That is, you can use the index defined with one table to index another table if both table descriptions are identical. To be identical, the tables must have the same number of occurrences, as well as occurrences of the same length.

You define an index data item with the USAGE IS INDEX clause.