MVS provides a comprehensive catalog facility that records the location of files so that you do not have to specify the vol-ser of the volume that contains the file. Considering that many MVS installations have hundreds of DASD volumes and thousands of data sets, cataloging is a must. It would be impractical to keep track of the locations of that many files manually.

An MVS installation can create catalogs using any of three formats. Catalogs of the oldest format, called OS catalogs or CVOLs, are not used much anymore. (CVOLs did not distinguish between master and user catalogs.) When VSAM was announced in the early 1970s, one of its major benefits was a comprehensive catalog facility that could easily be used to manage the growing number of data sets typical of a large MVS installation. This new facility used VSAM catalogs that were based on the master/user catalog structure.

Unfortunately, the VSAM catalog structure contained fundamental weaknesses that led IBM to develop yet another catalog structure, called the Integrated Catalog Facility, or ICF. ICF catalogs are functionally similar to VSAM catalogs, but they have a different internal format. Today, most of the larger installations have fully converted to ICF catalogs, though some smaller installations still use VSAM and CVOL catalogs. 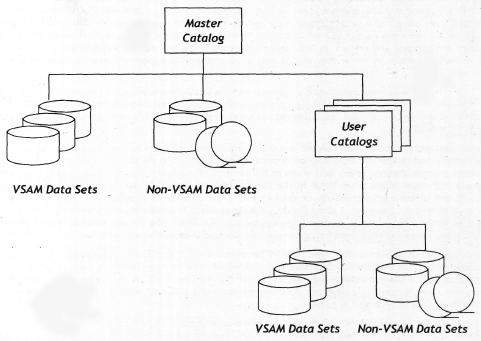