As mentioned briefly before. Access Method Services (AMS) is used to perform various functions on VSAM data sets and catalogs. AMS has a utility program called IDCAMS that can be invoked through a standard JCL and will perform the various functions of the AMS through its commands. The most commonly used AMS commands are:

A skeleton JCL to invoke IDCAMS is given below.

For these examples, the clusters and alternate indexes should be defined as follows:

The update routine is passed the following:

The display routine is passed the following:

Suppose you want to define a KSDS data set for an Customer Information system.

Let us say the layout of each customer record is:

The layout of the customer record is shown in the following figure.

Layout of the Customer Record

The JCL for allocating the KSDS data set is given below:

The first 6 bytes, which is the customer no, is the primary key of the record. Note the use of hyphen (-) as the continuation character. This indicates that the AMS command is not yet complete and that the following line should be treated as a continuation of the previous line.

Let us examine the JCL line by line.

If this JCL were executed after being customized to your installation standards, a KSDS cluster CUSTOMER.KSDS.CLUSTER would be allocated. The allocation messages would be in the SYSPRINT device Note that we have just created the cluster and it will still be empty. You would have to load records into the cluster using a program or the REPRO command. This will be discussed in a later section. Note that there are more extensive options for allocation of a KSDS cluster. Refer to an IBM manual for details.

Defining an ESDS is very similar to that of a KSDS except for the following differences. Since ESDS does not have imbedded free space, the FREESPACE parameter is not used 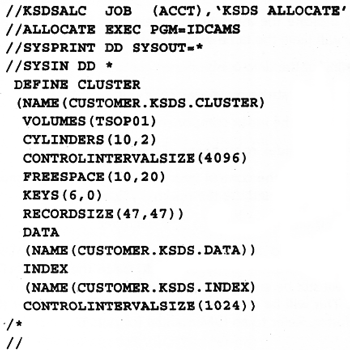 If this JCL is executed after being customized to your installation standards, an ESDS cluster CUSTOMER.ESDS.CLUSTER would be allocated. Note that if the NONINDEXED parameter is omitted AMS would assume the default value INDEXED and allocate a KSDS cluster with default values for FREESPACE, KEYS, index component etc.

Defining an RRDS is very similar to that of an ESDS except for the following differences. 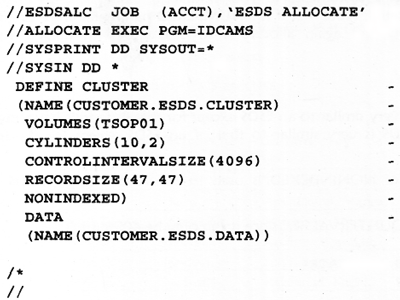 If this JCL were executed after being customized to your installation standards, an RRDS cluster CUSTOMER.RRDS.CLUSTER would be allocated. Note that if the NUMBERED parameter were omitted AMS would assume the default value INDEXED and again allocate a KSDS cluster with default values for FREESPACE, KEYS, index component etc. 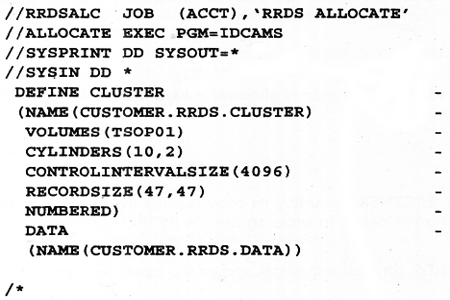 If this JCL were executed after being customized to your installation standards, an LDS cluster CUSTOMER.LDS.CLUSTER would be allocated. Note that the RECORDS1ZE parameter is omitted because an LDS doesn't have any concept of a record. It is just a long stream of characters.