Netscape introduced RSS in 1999 as a concept to syndicate content. At that time, RSS stood for Rich Site Summary. However, Netscape abandoned the concept in 2001 and UserLand Software began pioneering a similar technology as Really Simple Syndication. Still others refer to the RSS concept as RDF Site Summary.

In any case, RSS exists as a simple way to syndicate content. Syndication is a means of distributing content with the intent of allowing others to publish it. Typically, syndication applies to newspaper columns, comics, and other works of art—and, generally, one derives a fee for each use. In this case, syndication means an easy method for others to preview your content and optionally republish it. Sites such as slashdot.org, cnet.com, and others use RSS feeds to syndicate their content, as do many Weblog (blog) authors.

RSS syntax
The syntax for RSS feeds varies considerably depending on the version of RSS that you adhere to. However, the feed is usually published as an XML file with a strict syntax. For example, a typical RSS feed file might resemble the following:

In XML format, the file’s headers spell out its content and which version of RSS is being used. The beginning of the <channel> section provides details about the main site, while each <item> section provides details about a particular article. Each feed can have up to 15 <item>s and is generally arranged with the newest article first and the oldest article last. As articles are added to the feed, the older articles are moved off the feed.

Publishing the feed
The XML file is made accessible via HTTP, and special applications can access the feeds and notify users when the feed is updated. For example, the open source project BottomFeeder can monitor several feeds and even seek out new feeds. Figure shows an example of BottomFeeder in action.

A popular Windows reader is NewsGator, which integrates into Microsoft Outlook. Several other applications can monitor RSS feeds as well, such as Trillian (www.trillian.cc/trillian/index.html). (The Pro version has a nifty news plug-in.)
These tools monitor feeds by periodically accessing the RSS feed file and informing the user when the feed file changes. The individual <item> blocks are usually displayed for users, who can visit the site or see the complete article by clicking the listing.

Applications such as BottomFeeder can monitor several RSS feeds. 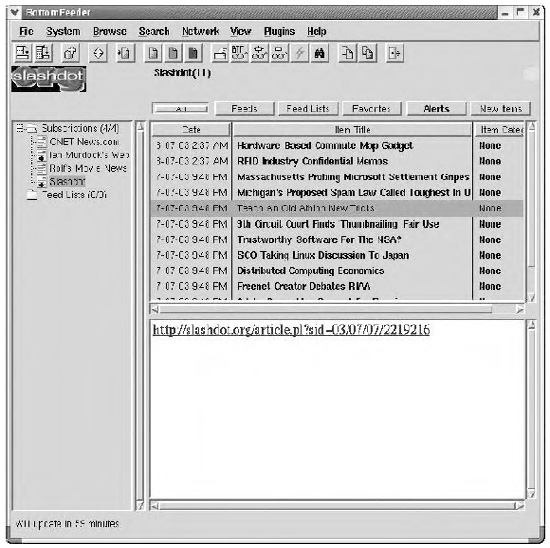 Most blogging software will automatically create RSS feeds from your content. You still must configure how many articles will be placed in the RSS file, how long they will stay, and what information (title, teaser, and so on) is stored in the feed. See your software’s documentation for details on how to configure your feed. If your blogging software doesn’t support RSS feeds natively, look for tools such as NewsIsFree to build your feeds.