Several different scripting languages are available for use on Web servers—more are appearing each day. This section describes the most popular languages and technologies in use today.

Tip:Just because a programming language can be used to implement CGI doesn’t mean that it should be used. There are several security concerns relating to using CGI with a Web server. Many of the more common CGI-capable languages have built-in security components and therefore are safer to use. Other, unproven languages (operating system, macro languages, and so on) can present the outside world with more access to your server and underlying file system than you intend.

Note;Keep in mind that a program must output data in a form recognized by the user’s interface, typically a Web browser. For example, a CGI program used to render an HTML document must pass the correct MIME type and document type definition as well as encapsulate its output in appropriate HTML tags.

Each type of programming language (compiled/interpreted) has distinct advantages and disadvantages. Compiled languages tend to be faster executing, but require the extra compilation step to be deployed. Interpreted languages are a bit slower, but provide a little more flexibility during development.

Microsoft’s earliest contributions to the Web were in the form of Active Server Pages (ASP) and ActiveX controls. ASP is Microsoft’s answer to CGI, allowing their programming languages to be used to extend a Web server’s capabilities. ActiveX controls extended the interactivity possible in Web pages by providing standard, Windows-like controls for users to interact with data on the Web. An example of a complex ActiveX control is provided, which shows the interface for a popular network camera.

Note:ActiveX controls only loosely fit into the scheme of server-side scripting, because they are actually downloaded and used by the client instead of the server. They are mentioned here for a sense of completeness and because they provide a viable option for extending the capabilities of the Web.

For the most part, ASP operates much like standard CGI, incorporating programs to extend a server’s capabilities. For example, the following code uses Visual Basic to store a value that is later output within an HTML document:

This simple example only scratches the surface of the power behind ASP. More complex code could look up data in a database and present it in tabular format or perform other complex operations whose results could then be presented in HTML, using the same method as shown previously.

The ActiveX control used by a popular network camera to allow control of the camera over the Internet. 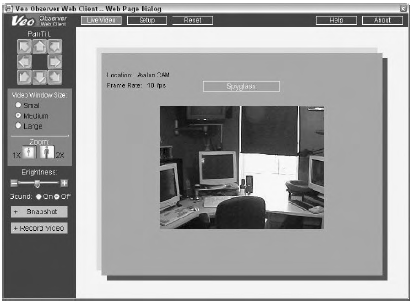 To use ASP (and the latest ASP.NET) requires a Microsoft Server running IIS along with the various pieces of ASP and .NET technologies. A good tutorial for getting up and running with ASP appears on the ASP101.com Web site, at www.asp101.com/lessons/install.asp.

PHP
PHP is a relative newcomer to the server-side scripting arena. However, it is one of the few solutions that were developed specifically for Web automation. As such, it has the most robust set of features for presenting all kinds of data in Web-friendly formats.

Hypertext Preprocessor (PHP for short) is essentially a general-purpose scripting language with the following features:

Unfortunately, PHP also has some serious drawbacks, also relating to its newness and genesis as a Web programming language:

The following code is an example of how PHP could be used to render the “Hello World” example shown in the ASP section, earlier in this chapter:

As with the earlier ASP example, this simple PHP example only scratches the surface of what you can accomplish with PHP. Instead of simply setting a string variable, the code could access a database and present the resulting data in a number of complex forms. PHP is available on Windows and Linux and requires that the PHP processor be installed on the Web server (both operating system and Web server application).

ColdFusion
ColdFusion by Allaire (now owned by Macromedia) is one product that greatly increases what your Web site can do without requiring any programming. Using a simple language, called Cold Fusion Markup Language(CFML), you can create powerful scripts you write right into your HTML pages. The ColdFusion server returns the script’s results right into your page.

Some of the cool things you can do are as follows: