The site structure is usually defined in a requirements document. This usually involves a schematic drawing of how the Web site should flow, and which pages are parents and which are children. Figure shows an example of a schematic for a very simple Web site containing only a few pages.

UML is a standardized modeling notation for representing software applications. You can use UML to model the way your Web application is used by each user, or the way each component behaves when interacting with other components.

Schematic for a simple Web site. 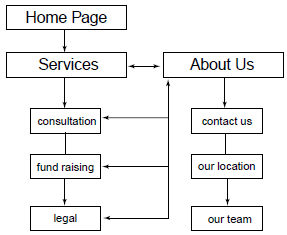 Using flow charts to define structure
You can also use your own process for creating a flow chart to define your Web site’s structure. You may not have time to learn UML, or your site’s team may not have the resources for it, in which case most developers simply create their own flow charts by expanding.

You can also use software designed for creating flow charts, such as SmartDraw and Visio (from Microsoft). These programs accelerate the flow-charting process by providing a drag-and-drop visual interface you use to create your charts and export them into graphic formats that you can use in other documents. 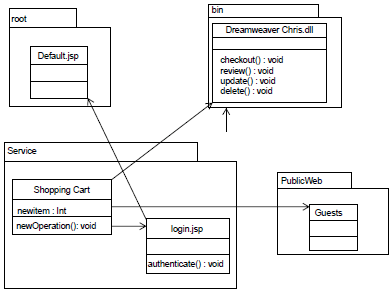 Specifying content
Another consideration when deciding what type of Web server software environment to choose is what kind of content you have. If you have static HTML, it doesn’t matter what kind of environment you have. You can just use the one that is most comfortable to you. If you have database-driven content, you’ll need to include the kind of database you expect to use in your considerations regarding a Web server environment. Several kinds of databases, including several open source varieties, are available, including the following major databases: