The prime concern within traditional or ‘hard’ HRP relates to balancing the demand for and the supply of human resources. Demand reflects an organisation’s requirements for human resources while supply refers to the availability of these resources, both within the organisation and externally.

Key stages within the traditional HRP process are largely derived from the techniques associated with manpower planning. The approach can be depicted in a number of different ways (see, for example, Armstrong, 2001;

Bramham, 1988; Torrington et al., 2002) but the models have a number of key features in common. All are essentially concerned with forecasting demand and supply and developing plans to meet any identified imbalance resulting from the forecasts. The Bramham model has proved to be one of the most influential. It was initially devised in 1975 and the basic structure is still relevant, albeit with minor modifications, for example by Pilbeam and Corbridge (2002). This is the model used in this chapter as a framework for the key stages of traditional HRP; see Figure.

The process of human resource planning 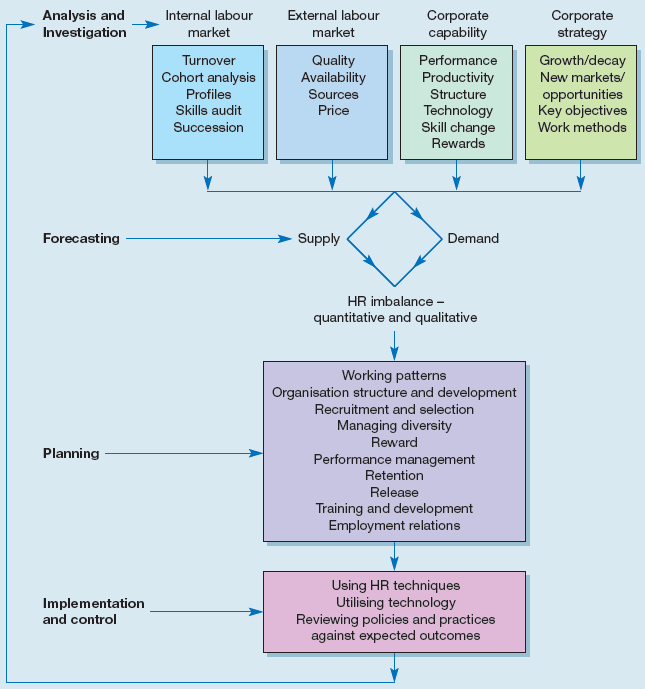 This stage is not explicit in all models but, arguably, those responsible for human resource planning need to know something about the current situation in order to assess the extent to which it is likely to alter or be affected by future developments.

The next stage in the process involves predicting how the need for and availability of human resources is likely to change in the future. Demand and supply forecasting can involve quantitative and qualitative techniques and the most popular approaches are outlined below.

The likely results of forecasting activity are the identification of a potential mismatch between future demand and supply. If future demand is likely to exceed supply, then plans need to be developed to match the shortfall but if future supply is likely to exceed demand, then plans need to be developed to reduce the surplus. A number of options are illustrated in Figure. While the detailed content of action plans will be determined by the nature of the imbalance between demand and supply and HR and corporate objectives, they are likely to cover at least some of the following areas:

Employee ‘movements’ in an organisation 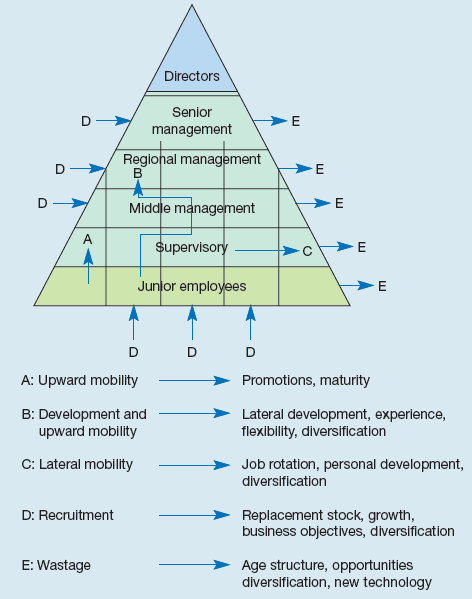 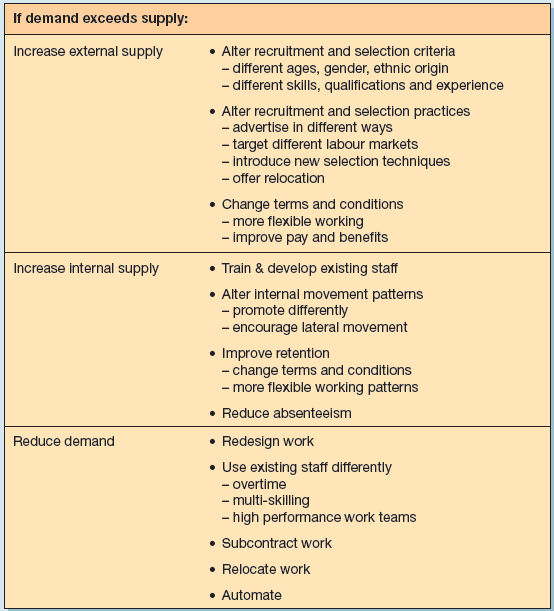 The scope and content of plans are also influenced by the time-scales involved. Schuler (1998) suggests that the main phases of HRP should be undertaken for three different time horizons – short term (1 year), medium term (2–3 years) and long term (3 years+). Advocates of human resource planning argue that the process helps to ensure vertical and horizontal integration, i.e. the alignment of human resource policies and practices with corporate goals and with each other.

So, for example, plans to address supply shortages by altering selection criteria can influence the type of training required, the level of pay and reward offered to existing and prospective employees and the way the employment relationship is managed. However, in practice the situation is likely to be complicated by the fact that the balance between demand and supply may vary in different parts of the organisation; for example, supply shortages may be identified in some areas while surpluses are predicted in others.

The development of action plans can potentially help to ensure that managers are aware of significant inconsistencies. The adoption of a more holistic approach can therefore reduce some of the problems associated with these complexities; for example, an organisation may need to recruit some staff at the same time as it is making others redundant but knowledge of this can help to ensure that both activities are handled sensitively.

The final stage of the traditional HRP process is concerned with implementation of HR plans and evaluation of their overall effectiveness. This stage of the model tends to be rather neglected in the literature but there is little point in developing comprehensive plans if they are not put into practice. Implementation of plans is likely to involve a number of different players, including line managers, employee representatives and employees, but the extent of involvement can vary considerably.

The shift towards ‘softer’, more qualitative aspects of human resource planning places far more emphasis on the need to involve employees throughout the process (e.g. through the use of enhanced communication and tools such as attitude surveys) than is apparent in a ‘harder’ focus on headcount. Control relates to the extent to which the planning process has contributed to the effective and efficient utilisation of human resources and ultimately to the achievement of corporate objectives. The IPM (now CIPD) suggests three criteria for evaluating the effectiveness of the HRP process (IPM, 1992):

This latter point emphasises the need for the constant review and modification of human resource plans in the light of changing circumstances. One of the main criticisms levelled at traditional approaches to HRP has been the inflexibility of plans resulting from the extrapolation of past data and assumptions about the future. The emphasis on flexibility is much more explicit in later models of HRP as the purpose of HRP has become less concerned with ensuring continuity and more on enabling organisations to adapt within unpredictable environments.

An Introduction To Human Resource Management: Strategy, Style Or Outcome

Human Resource Development: The Organisation And The National Framework

The Employment Relationship And Employee Rights At Work