Human resource management: the state of the debate - HR Management

The question of whether human resource management has the capacity to transform or replace deeply rooted models of personnel management and industrial relations, or could become a fully worked-through theory of management, is one that cannot be answered in a simple manner. Human resource management has many cogent critics and many sceptical supporters. Initial criticism which claimed that it was ‘old wine in new bottles’, the restatement perspective outlined earlier in this chapter, still has strong adherents (Keenoy and Anthony, 1992). Others see it as a version of ‘the emperor’s new clothes’ (Legge, 1989) or a ‘wolf in sheep’s clothing’ (Armstrong, 1987; Fowler, 1987; Keenoy, 1990a).

A model of the shift to human resource management 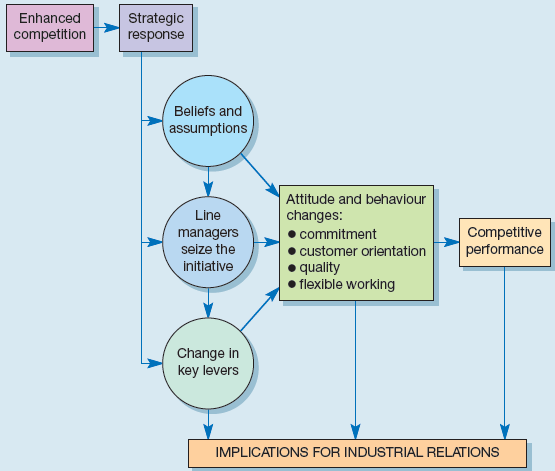 Tom Keenoy is one of the most eloquent and persuasive of critics, and his examination of HRM has exposed many of the a priori assumptions and non-sequiturs that abound in the reasoning of its supporters. He claims that HRM is more rhetoric than reality and has been ‘talked up’ by its advocates. It has little support in terms of evidence, and has been a convenient dustbin of rationalisation to support ideological shifts in the employment relationship brought about by market pressures. It is also full of contradictions, not only in its meanings but also in its practice.

In examining the meanings of HRM Keenoy notes that a ‘remarkable feature of the HRM phenomenon is the brilliant ambiguity of the term itself’. He later continues: ‘On the “Alice principle” that a term means whatever one chooses it to mean, each of these interpretations may be valid but, in Britain, the absence of any intellectual touchstones has resulted in the term being subject to the process of almost continuous and contested conceptual elision’ (Keenoy, 1990b: 363–384).

Legge (1989) has shown that a close examination of the normative models of HRM and personnel management reveals little difference between the two, and that HRM contains a number of internal contradictions. Legge points out that there is a problem with integration in the sense that HRM policies have to integrate with business policy. She asks: ‘Is it possible to have a corporation-wide mutually reinforcing set of HRM policies, if the organisation operates in highly diverse product markets, and, if not, does it matter, in terms of organisational effectiveness?’.

‘If the business strategy should dictate the choice of HRM policies, will some strategies dictate policies that . . . fail to emphasise commitment, flexibility and quality?’. Legge also comments on the probable incompatibility of creating an organisational culture that attempts to pursue both individualistic and teamwork policies at the same time. Other critics have indicated that many organisations are driven by stronger objectives than HRM. Armstrong (1989) has pointed to the financial orientations of most companies, which are incompatible with those prescriptions described as imperative in the practice of HRM.

Furthermore, the belief that human resource management can transcend national cultures has attracted considerable critical comment (Pieper, 1990). The 1990s saw a growing sophistication in the nature of the debate involving HRM. The nature of the debate at the conclusion of that decade was much more extensive than that which ushered it in. One signal factor was the reconstruction and expansion of the most important research ‘engine’ in the UK, the Workplace Employee Relations Survey of 1998 (Cully et al., 1999), which has specifically addressed HRM-based issues of techniques and performance.

Part of this development has been promoted by the realisation that traditional sources of competitive advantage, such as technological supremacy, patents and capital, are much less important than they were, in a world in which many countries can display equal advantage in at least some of these critical aspects (Pfeffer, 1994, 1998). Thus the extent to which an organisation can mobilise its internal human resources may hold the key to achievable advantage in the future (Prahalad and Hamel, 1990).

Wood (1995) has examined high-commitment management in terms of what he calls the ‘four pillars of HRM’ and their ability to deliver significant HRM performance; Guest and Hoque (1996) have examined the concept of ‘fit’ in the specific circumstances of HRM techniques in greenfield sites and the ‘bundles’ of practice that might affect performance; Purcell (1996, 1999) has critically examined the notion of ‘bundles’ but has provided a thoughtful analysis of resource-based HRM in the context of corporate strategy (1995); while Boxall has sought to relate resource-based analysis to the strategic HRM debate (1996).

A number of commentators (e.g. Storey, 1992; Guest, 1997; Gratton et al., 1999) have noted that there appears to be fairly extensive use of individual HR practices in UK Human resource management: the state of the debate 25 organisations. However, the extent to which these are linked together into a meaningful strategic whole is more contentious (Storey, 2001). WERS (Cully et al., 1999) found evidence of each of the 15 practices identified by the survey as indicative of HRM but only three of them (formal grievance and disciplinary procedures, team-briefing and regular appraisals) appear in more than half of workplaces.

The practices are more likely to occur in workplaces with an employment relations specialist and an integrated employee development plan, suggesting some level of strategic integration. However, only 14 per cent of workplaces have eight or more of the practices while 29 per cent have fewer then three. The WERS team argue that ‘there is evidence that a number of practices consistent with a human resource management approach are well entrenched in many British workplaces’ (Cully et al., 1999:82) but the practices are often adopted in a pragmatic and piecemeal way.

Sisson (2001: 80–81) identifies two main explanations to account for the low take-up of some HR practices. The first is that the time, resources and costs associated with change may tempt managers to adopt an incremental approach, i.e. ‘to try one or two elements and assess their impact before going further, even though this means forgoing the benefits of the integration associated with bundles of complementary practices’. The second (and in Sisson’s words, ‘less comfortable’) explanation is that HRM is only one means of achieving competitive advantage and other methods adopted by organisations, e.g. mergers, joint ventures, cost-cutting and new forms of Taylorism, do not involve a change in the way people are managed.

A further element in the contemporary discussion is the question of whether HRM affords line management more control of the HR function than HR specialists themselves have. If one of the attributes of HRM is its devolution to the line, then perhaps a logical consequence is the relative loss of influence and control by the erstwhile keepers of the corporate personnel conscience. Does this matter? In the words of Fernie et al. (1994), is HRM all ‘Big Hat, No Cattle’? The extent to which HRM activity has shifted to the line, and the associated question of whether personnel managers are any more strategic in their role than in the past, is difficult to determine conclusively.

The Second Company Level Industrial Relations Survey (Marginson et al., 1993) found no evidence to support general strategic involvement, and some evidence that, without a personnel director on the board, involvement in the formulation of human resource policy was weakened – findings largely supported by Purcell and Ahlstrand’s (1994) study of multidivisional organisations. Perhaps the clearest evidence to suggest that personnel management was losing out to the line is provided by Storey’s (1992) study of ‘mainstream’ companies and the introduction of HRM, although a study of 28 organisations by Kelly and Gennard (1994) presented a different picture based on interviews with personnel directors.

In an important sense, therefore, one answer to Storey’s (1995) rhetorical question ‘HRM: still marching on or marching out?’ is that ‘the domain is still lively, vibrant and contested’ (Storey, 2001: 16). And a reaction to Bach and Sisson’s (2000) view that the flood-tide of HRM is waning is to note that the tide appears still to be flooding strongly, with new aspects appearing on the agenda or existing issues further strengthening their position. What are the agenda items that are currently concerning academics and practitioners? Perhaps three particular aspects can serve from the strategy, style and outcome debate explored at the outset.

From a strategic perspective, one can explore the tendency of organisations to adopt similar approaches. Purcell (2001: 75) outlines three factors that might account for this: firstly, the tendency to copy ‘best practice’ because it appears to work but without understanding why this might be the case. Secondly, organisations might be pressured by the short-termism in the capital market or by major customers to do – or not do – certain things, e.g. training. Thirdly, the rise of HR consultancies has led to a spread of ideas that encourage conformity.

An approach to the style perspective might be seen in the role of the psychological contract and employee motivation. Guest and Conway (1997) point to evidence that suggests that employees report positive responses to issues such as fairness, trust and delivery on promises. The Fourth WERS survey of 1998 noted that 68 per cent of workplaces with over 500 employees report participation in problem-solving groups.

There is a large agenda item that is concerned with examining and assessing the scope and significance of managerial styles in terms of involvement, commitment and delivery on the part of the employer, and the resultant response from employees to give assent and commitment to management systems that stress these aspects of the employment relationship. What is unclear is how these factors hold over time, and whether component elements within this agenda will remain significant or important and thus weaken or strengthen the concept.

The third area for further work lies in the area of outcomes. At the present time there is much work exploring the nature of HRM ‘bundles’, and one might expect more as the data from WERS 98 are analysed further. Perhaps one strand of this debate is worth emphasis – high-commitment management and the emphasis on work management systems that achieve specific outcomes (Wood and De Menezes, 1998). This approach seems to have found good evidence that a particular managerial style, allied to a particular combination of practices, will lead to beneficial business outcomes.

Again, whether this is sustainable over time remains a key question and, as we have already discussed, a number of doubts have been raised over the validity of the claims. Nevertheless, it represents a significant addition to the literature and practice of HRM. If these three approaches to research, analysis and practice in HRM are indicative of its breadth and strength at the beginning of the twenty-first century, is there a way in which one can summarise these initiatives? Given that emphasis has been placed in the past on strategy, fit and integration, perhaps one final element ought to be noted as a key ingredient – that of mix.

Whatever the strategic intent, managerial style, outcomes sought or tight–loose ‘fit’ adopted by organisations, it will be in the mix of these components that we will find not only some answers to questions but also the further development of HRM as a significant approach to managing employees.

An Introduction To Human Resource Management: Strategy, Style Or Outcome

Human Resource Development: The Organisation And The National Framework

The Employment Relationship And Employee Rights At Work