The purpose of this method of presentation is to help future professionals to develop a systematic way of continually improving communications.

Situation : Marketing and Sales Knows It All - but Didn’tTell Us

Mr. and Mrs. Oil Magnate are hosting a private party for 200 people in the Chandelier Room of City Hotel. On arriving at the hotel, they approach the front desk and ask if Mr. Benton, the director of marketing and sales, is available. The desk clerk checks the duty board and sees that Mr. Benton has left for the day. He responds, “Sorry, he’s left for the day. What are you here for anyway?” The Magnates immediately feel neglected and ask to see the manager on duty.

Mr. Gerard, the assistant general manager, arrives on the scene and asks what he can do for the Magnates. Mr. Magnate has a number of concerns: Who will be in charge of their party? Will their two favorite servers be serving the cocktails, appetizers, and dinner?

Have the flowers that were flown in from Holland arrived? Mr. Gerard says, “Gee, you’ll have to speak with Andre´, our banquet captain. He knows everything.”

When Andre´ arrives on the scene, he tells the Magnates that Mr. Benton left no instructions about who will be serving the party, and he has not seen any tulips in the walking.

Mrs. Magnate declares that this party will be a disaster. Mr. Magnate decides to proceed with the party and take up the lack of professional service later.

Later has arrived: Mr. Magnate has complained to the general manager and I. M.

Owner - owner of City Hotel - and both are upset about the situation. Mr. Magnate and I. M. Owner are co - investors in a construction project. Even if the two men were not business associates, the treatment of any guest in such a shabby way spells disaster for future convention and banquet sales.

The communications breakdown in this case was the fault of all the employees involved. Communication is a two - way process, and both senders and receivers must take active roles. As “the sender,” Mr. Benton, the director of marketing and sales, did not do his homework. Assuming he was aware of I. M. Owner’s relationship with Mr. and Mrs.Magnate, he should have adjusted his work schedule so that he could be there for the party.

He also should have informed the front office manager of the Magnates’ scheduled event, explained who they were, and asked that he be summoned immediately on their arrival. Mr. Benton should also have worked more closely with Andre´, the banquet manager, in scheduling employees and receiving and storing the flowers. Although Mr. Gerard, the assistant general manager, would not normally be involved in the details of a party, in this case, the VIP status of the guests would be a reason for him to be aware of the presence of the Magnates in the hotel.

The “receivers” in the communication process are also at fault. These include the front office staff, the banquet manager, and the assistant general manager. At times, a member of the management team will fail to communicate the particulars of an upcoming event.

However, the front office staff, the banquet manager, and the assistant general manager are responsible for reviewing the daily function board as well as the weekly function sheet. They are also responsible for learning about the backgrounds of the people, associations, and corporations that stay at and conduct business with the hotel.

Several things can be done to avoid this type of situation. First, the front office manager can ensure that the initial guest contact will be professional by reviewing the function board with each front desk employee on each shift. The manager can then help the front office staff focus on the upcoming events of the day. Weekly staff meetings may also provide an opportunity for the director of marketing and sales to give brief synopses of who will be in the hotel in the coming week. At that point, any special requests for VIP treatment could be noted.

Situation : Why Can’t Those Room Attendants in Housekeeping Get Those Rooms Cleaned More Quickly - or, If That Guest Asks One More Time . . .

It is a busy Tuesday morning at the front desk. The Rosebud Flower Association (350 guests) is checking out of the hotel. The Franklin Actuary Society (250 guests) is beginning to arrive for registration. Yesterday, the president of Rosebud, Jose´ Rodrı´guez, requested a late checkout for all his members because they had to vote on an important legislative issue. The president asked a desk clerk, Samantha (a new member of the front office staff), to approve the late checkout. Samantha, unaware of any reason not to grant this request, OK’d a 2:30 p.m. checkout time.

They tell him that there are do not disturb signs on the doors of the majority of the rooms. One of the guests told the supervisor on the second floor that he had permission to stay in the rooms until 2:30 p.m. When the housekeeper relays this information to the front office manager, a nasty exchange takes place between these two managers concerning the delivery of professional hospitality.

It is now 3:15 p.m., and the hotel lobby is jammed with people checking out and checking in. Only about 20 percent of the rooms needed have been released by housekeeping.

At 7:20 p.m., the last guest is checked in. The front office manager breathes a sigh of relief and happens to notice a gift box addressed to Samantha. Samantha opens itand reads the card out loud: “Extra thanks to you for your kind consideration.”

The front office manager reminds Samantha that gifts from registered guests are not encouraged. Samantha replies that this is from a former guest - “You know, that nice Mr. Rodrı´guez from the flower association. All he asked for was a late checkout time for his group.”

A typical review of procedures could include the following:

When the front office manager takes the time to explain the policies and procedures of the department, the new employee can think through situations rather than responding with a knee - jerk reaction. The delivery of service in a hotel requires the employee to be able to meet the needs of the guests by exercising his or her authority and taking responsibility for conveying an atmosphere of hospitality.

The director of maintenance, Sam Jones, has assigned his crew to start painting the fifth - floor hallway. Prior to making this assignment, he checked with the reservations manager, Keith Thomas, for approval to place the fifth - floor rooms “out of order” for four days. Keith consented because a prior reservation for 150 rooms for Photo Bugs International had been confirmed for 100.

At 1:00 p.m., Sam receives a call from Keith asking if it would be possible to reassign the painting crew to some other duty. The Photo Bugs have arrived - all 150 rooms’ worth! The lobby is filled with guests, for whom there are no available rooms. Sam tells Keith to give them one hour to clean up the mess and air out the south wing. He says the north wing had not been prepared for painting, so those guest rooms are ready for occupancy.

What went right? What went wrong? This case demonstrates that cooperation between two staff members can resolve even the most unfortunate of situations. Sam was aware of the need for prior approval to take guest rooms out of service. Keith’s decision to grant the request had a legitimate basis. Sam was also able to head off a nasty situation for the guests by being flexible. Then what went wrong?

The words that people use in communicating with hotel staff members must be clarified.

In this case, the person who booked the convention said that there were confirmations for 100. Was this 100 guests for 50 rooms or 100 guests for 100 rooms? This lack of clarification was at the root of the problem. In some hotels, the reservations manager may require a change in reservations to be written (in the form of a letter); these written instructions are then attached to the convention contract.

These examples of day - to - day problems in a hotel underscore the importance of good communication between the front office and other departments in the hotel. Similar problems will occur again and again as you begin your career in the hospitality industry. You will grow as a professional if you adopt an analytical view of the communication system.

Front office managers who actively participate in systematic communications will be more effective managers. Training employees in proper procedures for dealing with other employees as well as their own departments will help improve the delivery of professional hospitality. 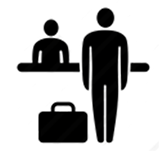