In this section, we dig into the Hadoop’s FileSystem class: the API for interacting with one of Hadoop’s filesystems.While we focus mainly on the HDFS implementation, DistributedFileSystem, in general you should strive to write your code against the FileSystem abstract class, to retain portability across filesystems. This is very useful when testing your program, for example, since you can rapidly run tests using data stored on the local filesystem.

Reading Data from a Hadoop URL

One of the simplest ways to read a file from a Hadoop filesystem is by using a java.net.URL object to open a stream to read the data from. The general idiom is:

There’s a little bit more work required to make Java recognize Hadoop’s hdfs URL scheme. This is achieved by calling the setURLStreamHandlerFactory method on URL with an instance of FsUrlStreamHandlerFactory. This method can only be called onceper JVM, so it is typically executed in a static block. This limitation means that if some other part of your program perhaps a third-party component outside your control sets a URLStreamHandlerFactory, you won’t be able to use this approach for reading data from Hadoop. The next section discusses an alternative.

We make use of the handy IOUtils class that comes with Hadoop for closing the stream in the finally clause, and also for copying bytes between the input stream and the output stream (System.out in this case). The last two arguments to the copyBytes method are the buffer size used for copying and whether to close the streams when the copy is complete. We close the input stream ourselves, and System.out doesn’t need to be closed.Here’s a sample run:

As the previous section explained, sometimes it is impossible to set a URLStreamHand lerFactory for your application. In this case, you will need to use the FileSystem API to open an input stream for a file.

FileSystem is a general filesystem API, so the first step is to retrieve an instance for the filesystem we want to use HDFS in this case. There are two static factory methods for getting a FileSystem instance:

authority to determine the filesystem to use, falling back to the default filesystem if no scheme is specified in the given URI.With a FileSystem instance in hand, we invoke an open() method to get the input stream for a file:

The first method uses a default buffer size of 4 K.

The open() method on FileSystem actually returns a FSDataInputStream rather than a standard java.io class. This class is a specialization of java.io.DataInputStream with support for random access, so you can read from any part of the stream:

The Seekable interface permits seeking to a position in the file and a query method for the current offset from the start of the file (getPos()):

Calling seek() with a position that is greater than the length of the file will result in an IOException. Unlike the skip() method of java.io.InputStream that positions the stream at a point later than the current position, seek() can move to an arbitrary, absoluteposition in the file.

it is a simple extension of Example hat writes a file to standard out twice: after writing it once, it seeks to the start of the file and streams through it once again.Displaying files from a Hadoop filesystem on standard output twice, by using seek:

Here’s the result of running it on a small file:

FSDataInputStream also implements the PositionedReadable interface for reading parts of a file at a given offset:

The read() method reads up to length bytes from the given position in the file into the buffer at the given offset in the buffer. The return value is the number of bytes actually read: callers should check this value as it may be less than length. The readFully() methods will read length bytes into the buffer (or buffer.length bytes for the version that just takes a byte array buffer), unless the end of the file is reached, in which case an EOFException is thrown.

All of these methods preserve the current offset in the file and are thread-safe, so they provide a convenient way to access another part of the file metadata perhaps while reading the main body of the file. In fact, they are just implemented using the Seekable interface using the following pattern:

Finally, bear in mind that calling seek() is a relatively expensive operation and should be used sparingly. You should structure your application access patterns to rely on streaming data, (by using MapReduce, for example) rather than performing a large number of seeks.
Writing Data

The FileSystem class has a number of methods for creating a file. The simplest is the method that takes a Path object for the file to be created and returns an output stream to write to:

There are overloaded versions of this method that allow you to specify whether to forcibly overwrite existing files, the replication factor of the file, the buffer size to use when writing the file, the block size for the file, and file permissions.

The create() methods create any parent directories of the file to be written that don’t already exist. Though convenient, this behavior may be unexpected. If you want the write to fail if the parent directory doesn’t exist, then you should check for the existence of the parent directory first by calling the exists() method.There’s also an overloaded method for passing a callback interface, Progressable, so your application can be notified of the progress of the data being written to the datanodes:

As an alternative to creating a new file, you can append to an existing file using the append() method (there are also some other verloaded versions):

The append operation allows a single writer to modify an already written file by opening it and writing data from the final offset in the file. With this API, applications that produce unbounded files, such as logfiles, can write to an existing file after a restart, for example. The append operation is optional and not implemented by all Hadoop filesystems. For example, HDFS supports append, but S3 filesystems don’t.

shows how to copy a local file to a Hadoop filesystem. We illustrate progress by printing a period every time the progress() method is called by Hadoop, which is after each 64 K packet of data is written to the datanode pipeline. (Note that this particular behavior is not specified by the API, so it is subject to change in later versions of Hadoop. The API merely allows you to infer that “something is happening.”)

Copying a local file to a Hadoop filesystem

Currently, none of the other Hadoop filesystems call progress() during writes. Progress is important in MapReduce applications, as you will see in later chapters.

The create() method on FileSystem returns an FSDataOutputStream, which, like FSDataInputStream, has a method for querying the current position in the file:

However, unlike FSDataInputStream, FSDataOutputStream does not permit seeking. This is because HDFS allows only sequential writes to an open file or appends to an already written file. In other words, there is no support for writing to anywhere other than theend of the file, so there is no value in being able to seek while writing.

FileSystem provides a method to create a directory:

This method creates all of the necessary parent directories if they don’t already exist, just like the java.io.File’s mkdirs() method. It returns true if the directory (and all parent directories) was (were) successfully created.

Often, you don’t need to explicitly create a directory, since writing a file, by calling create(), will automatically create any parent directories.

An important feature of any filesystem is the ability to navigate its directory structure and retrieve information about the files and directories that it stores. The FileStatus class encapsulates filesystem metadata for files and directories, including file length, block size, replication, modification time, ownership, and permission information.The method getFileStatus() on FileSystem provides a way of getting a FileStatus object for a single file or directory. Example shows an example of its use.

Finding information on a single file or directory is useful, but you also often need to be able to list the contents of a directory. That’s what FileSystem’s listStatus() methods are for:

Overloaded variants allow a PathFilter to be supplied to restrict the files and directories to match you will see an example in section “PathFilter” Finally, if you specify an array of paths, the result is a shortcut for calling the equivalent single-path listStatus method for each path in turn and accumulating the FileStatus object arrays in a single array. This can be useful for building up lists of input files to process from distinct parts of the filesystem tree. is a simple demonstration of this idea. Note the use of stat2Paths() in FileUtil for turning an array of FileStatus objects to an array of Path objects.

It is a common requirement to process sets of files in a single operation. For example, a MapReduce job for log processing might analyze a month’s worth of files contained in a number of directories. Rather than having to enumerate each file and directory to specify the input, it is convenient to use wildcard characters to match multiple files with a single expression, an operation that is known as globbing. Hadoop provides two FileSystem method for processing globs:

The globStatus() method returns an array of FileStatus objects whose paths match the supplied pattern, sorted by path. An optional PathFilter can be specified to restrict the matches further.

Imagine that logfiles are stored in a directory structure organized hierarchically by date. So, for example, logfiles for the last day of 2007 would go in a directory named /2007/12/31. Suppose that the full file listing is:

Here are some file globs and their expansions: 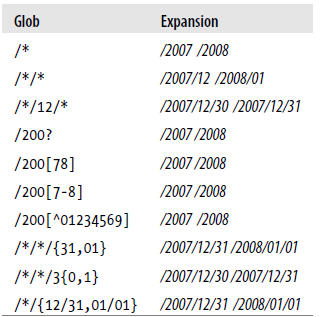 Glob patterns are not always powerful enough to describe a set of files you want to access. For example, it is not generally possible to exclude a particular file using a glob pattern. The listStatus() and globStatus() methods of FileSystem take an optional PathFilter, which allows programmatic control over matching:

The filter passes only files that don’t match the regular expression. We use the filter in conjunction with a glob that picks out an initial set of files to include: the filter is used to refine the results. For example:

Filters can only act on a file’s name, as represented by a Path. They can’t use a file’s properties, such as creation time, as the basis of the filter. Nevertheless, they can perform matching that neither glob patterns nor regular expressions can achieve. For example, if you store files in a directory structure that is laid out by date (like in the previous section), then you can write a PathFilter to pick out files that fall in a given date range.

Use the delete() method on FileSystem to permanently remove files or directories: