You’ve seen how MapReduce works for small inputs; now it’s time to take a bird’s-eye view of the system and look at the data flow for large inputs. For simplicity, the examples so far have used files on the local filesystem. However, to scale out, we need to store the data in a distributed filesystem, typically HDFS (which you’ll learn about in the next chapter), to allow Hadoop to move the MapReduce computation to each machine hosting a part of the data. Let’s see how this works.

First, some terminology. A MapReduce job is a unit of work that the client wants to be performed: it consists of the input data, the MapReduce program, and configuration information. Hadoop runs the job by dividing it into tasks, of which there are two types: map tasks and reduce tasks.

Hadoop divides the input to a MapReduce job into fixed-size pieces called input splits, or just splits. Hadoop creates one map task for each split, which runs the userdefined map function for each record in the split.

Having many splits means the time taken to process each split is small compared to the time to process the whole input. So if we are processing the splits in parallel, the processing is better load-balanced if the splits are small, since a faster machine will be able to process proportionally more splits over the course of the job than a slower machine. Even if the machines are identical, failed processes or other jobs running concurrently make load balancing desirable, and the quality of the load balancing increases as the splits become more fine-grained.

On the other hand, if splits are too small, then the overhead of managing the splits and of map task creation begins to dominate the total job execution time. For most jobs, a good split size tends to be the size of an HDFS block, 64 MB by default, although this can be changed for the cluster (for all newly created files), or specified when each file is created.

Hadoop does its best to run the map task on a node where the input data resides in HDFS. This is called the data locality optimization. It should now be clear why the optimal split size is the same as the block size: it is the largest size of input that can be guaranteed to be stored on a single node. If the split spanned two blocks, it would be unlikely that any HDFS node stored both blocks, so some of the split would have to be transferred across the network to the node running the map task, which is clearly less efficient than running the whole map task using local data.

Map tasks write their output to the local disk, not to HDFS. Why is this? Map output is intermediate output: it’s processed by reduce tasks to produce the final output, and once the job is complete the map output can be thrown away. So storing it in HDFS, with replication, would be overkill. If the node running the map task fails before the map output has been consumed by the reduce task, then Hadoop will automatically rerun the map task on another node to re-create the map output.

Reduce tasks don’t have the advantage of data locality the input to a single reduce task is normally the output from all mappers. In the present example, we have a single reduce task that is fed by all of the map tasks. Therefore, the sorted map outputs have to be transferred across the network to the node where the reduce task is running, where they are merged and then passed to the user-defined reduce function. The output of the reduce is normally stored in HDFS for reliability. As explained in Chapter The Hadoop Disrtibuted Fle Systemfor each HDFS block of the reduce output, the first replica is stored on the local node, with other replicas being stored on off-rack nodes. Thus, writing the reduce output does consume network bandwidth, but only as much as a normal HDFS write pipeline consumes. 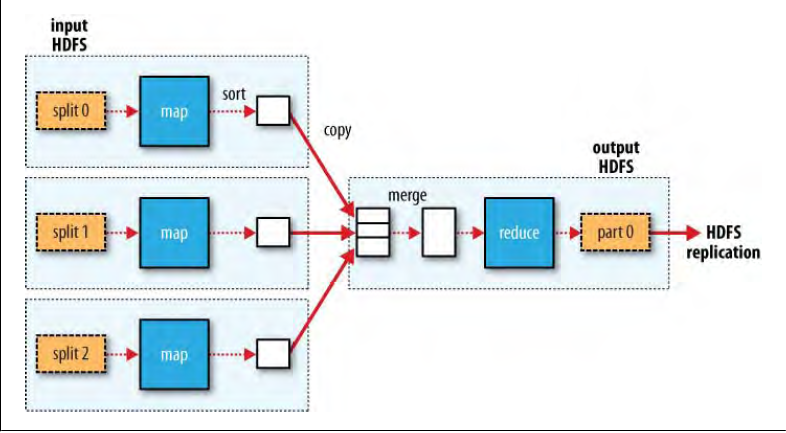 When there are multiple reducers, the map tasks partition their output, each creating one partition for each reduce task. There can be many keys (and their associated values) in each partition, but the records for any given key are all in a single partition. The partitioning can be controlled by a user-defined partitioning function, but normally the default partitioner which buckets keys using a hash function works very well.

The data flow for the general case of multiple reduce tasks is illustrated in Figure This diagram makes it clear why the data flow between map and reduce tasks is colloquially known as “the shuffle,” as each reduce task is fed by many map tasks. The shuffle is more complicated than this diagram suggests, and tuning it can have a big impact on job execution time, as you will see in “Shuffle and Sort” . 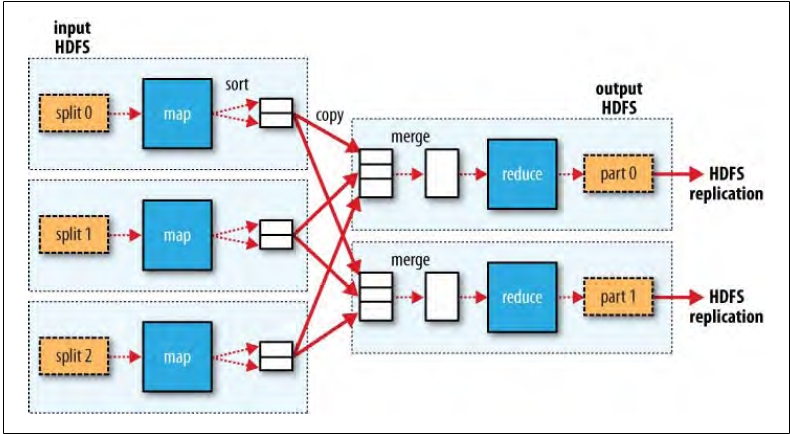 Finally, it’s also possible to have zero reduce tasks. This can be appropriate when you don’t need the shuffle since the processing can be carried out entirely in parallel (a few examples are discussed in “NLineInputFormat” ). In this case, the only off-node data transfer is when the map tasks write to HDFS (see Figure ). 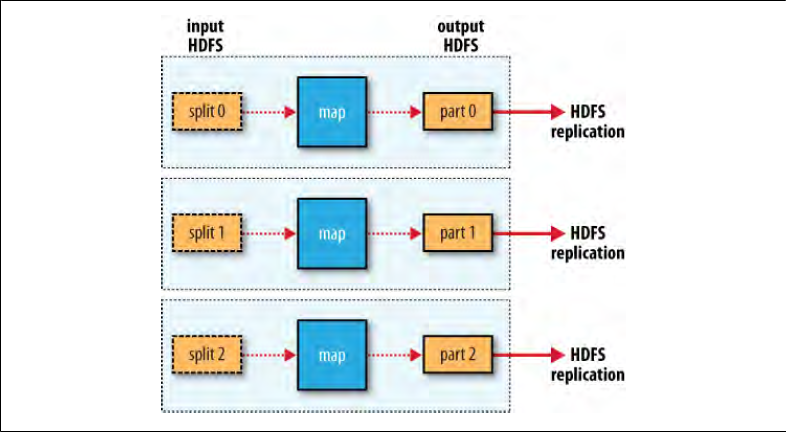 The contract for the combiner function constrains the type of function that may be used. This is best illustrated with an example. Suppose that for the maximum temperature example, readings for the year 1950 were processed by two maps (because they were in different splits). Imagine the first map produced the output:

And the second produced:

The reduce function would be called with a list of all the values:

since 25 is the maximum value in the list. We could use a combiner function that, just like the reduce function, finds the maximum temperature for each map output. The reduce would then be called with:

and the reduce would produce the same output as before. More succinctly, we may express the function calls on the temperature values in this case as follows:

Not all functions possess this property.† For example, if we were calculating mean temperatures, then we couldn’t use the mean as our combiner function, since:

Going back to the Java MapReduce program, the combiner function is defined using the Reducer interface, and for this application, it is the same implementation as the reducer function in MaxTemperatureReducer. The only change we need to make is to set the combiner class on the JobConf (see Example ).

Example . Application to find the maximum temperature, using a combiner function for efficiency

Running a Distributed MapReduce Job The same program will run, without alteration, on a full dataset. This is the point of MapReduce: it scales to the size of your data and the size of your hardware. Here’s one data point: on a 10-node EC2 cluster running High-CPU Extra Large Instances, the program took six minutes to run.

We’ll go through the mechanics of running programs on a cluster in hadoop streaming.