In Sqoop, an import refers to the movement of data from a database system into HDFS. By contrast, an export uses HDFS as the source of data and a remote database as the destination. In the previous sections, we imported some data and then performed some analysis using Hive. We can export the results of this analysis to a database for consumption by other tools.

Before exporting a table from HDFS to a database, we must prepare the database to receive the data by creating the target table. While Sqoop can infer which Java types are appropriate to hold SQL data types, this translation does not work in both directions (for example, there are several possible SQL column definitions that can hold data in a Java String; this could be CHAR(64), VARCHAR(200), or something else entirely). Consequently, you must determine which types are most appropriate.

We are going to export the zip_profits table from Hive. We need to create a table in MySQL that has target columns in the same order, with the appropriate SQL types:

Then we run the export command:

Finally, we can verify that the export worked by checking MySQL:

When we created the zip_profits table in Hive, we did not specify any delimiters. So Hive used its default delimiters: a Ctrl-A character (Unicode 0x0001) between fields, and a newline at the end of each record. When we used Hive to access the contents of this table (in a SELECT statement), Hive converted this to a tab-delimited representation for display on the console. But when reading the tables directly from files, we need to tell Sqoop which delimiters to use. Sqoop assumes records are newline-delimited by default, but needs to be told about the Ctrl-A field delimiters. The --input-fieldsterminated- by argument to sqoop export specified this information. Sqoop supports several escape sequences (which start with a '' character) when specifying delimiters.

In the example syntax above, the escape sequence is enclosed in 'single quotes' to ensure that the shell processes it literally. Without the quotes, the leading backslash itself may need to be escaped (for example, --input-fields-terminated-by �001).

The escape sequences supported by Sqoop are listed in Table 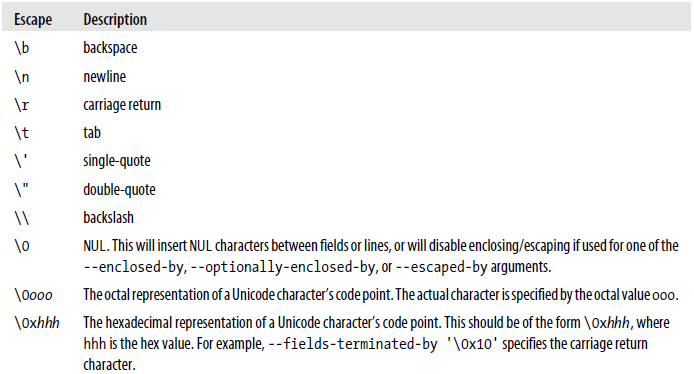