Hadoop has an abstract notion of filesystem, of which HDFS is just one implementation. The Java abstract class org.apache.hadoop.fs.FileSystem represents a filesystem in Hadoop, and there are several concrete implementations, which are described in hadoop file systems 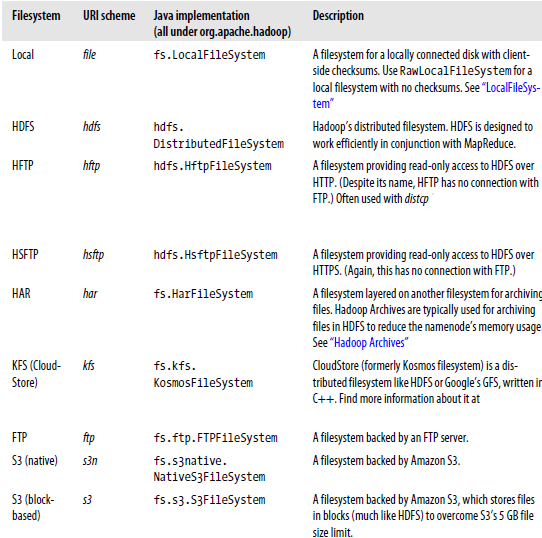 Hadoop provides many interfaces to its filesystems, and it generally uses the URI scheme to pick the correct filesystem instance to communicate with. For example, the filesystem shell that we met in the previous section operates with all Hadoop filesystems.To list the files in the root directory of the local filesystem, type:

Although it is possible (and sometimes very convenient) to run MapReduce programs that access any of these filesystems, when you are processing large volumes of data, you should choose a distributed filesystem that has the data locality optimization, suchas HDFS or KFS.

The Thrift API comes with a number of pregenerated stubs for a variety of languages, including C++, Perl, PHP, Python, and Ruby. Thrift has support for versioning, so it’s a good choice if you want to access different versions of a Hadoop filesystem from the same client code (you will need to run a proxy for each version of Hadoop to achieve this, however).

For installation and usage instructions, please refer to the documentation in the src/contrib/thriftfs directory of the Hadoop distribution.

Hadoop provides a C library called libhdfs that mirrors the Java FileSystem interface (it was written as a C library for accessing HDFS, but despite its name it can be used to access any Hadoop filesystem). It works using the Java Native Interface (JNI) to calla Java filesystem client.

The C API is very similar to the Java one, but it typically lags the Java one, so newer features may not be supported. You can find the generated documentation for the C API in the libhdfs/docs/api directory of the Hadoop distribution

The RPC interfaces in Hadoop are based on Hadoop’s Writable interface, which is Java-centric. In the future, Hadoop will adopt Avro, a cross-language, RPC framework, which will allow native HDFS clients to be written in languages other than Java.

Hadoop comes with prebuilt libhdfs binaries for 32-bit Linux, but for other platforms, you will need to build them yourself using the instructions at http://wiki.apache.org/ hadoop/LibHDFS.

Filesystem in Userspace (FUSE) allows filesystems that are implemented in user space to be integrated as a Unix filesystem. Hadoop’s Fuse-DFS contrib module allows any Hadoop filesystem (but typically HDFS) to be mounted as a standard filesystem. You can then use Unix utilities (such as ls and cat) to interact with the filesystem, as well as POSIX libraries to access the filesystem from any programming language.

Fuse-DFS is implemented in C using libhdfs as the interface to HDFS. Documentation for compiling and running Fuse-DFS is located in the src/contrib/fuse-dfs directory of the Hadoop distribution.

WebDAV is a set of extensions to HTTP to support editing and updating files. WebDAV shares can be mounted as filesystems on most operating systems, so by exposing HDFS (or other Hadoop filesystems) over WebDAV, it’s possible to access HDFS as a standardfilesystem.

At the time of this writing, WebDAV support in Hadoop (which is implemented by calling the Java API to Hadoop) is still under development, and can be tracked at https: //issues.apache.org/jira/browse/HADOOP-496.

There are two interfaces that are specific to HDFS:

HDFS defines a read-only interface for retrieving directory listings and data over HTTP. Directory listings are served by the namenode’s embedded web server (which runs on port 50070) in XML format, while file data is streamed from datanodes by their web servers (running on port 50075). This protocol is not tied to a specific HDFS version, making it possible to write clients that can use HTTPto read data from HDFS clusters that run different versions of Hadoop. HftpFile System is a such a client: it is a Hadoop filesystem that talks to HDFS over HTTP (HsftpFileSystem is the HTTPS variant).

Although not complete at the time of this writing (https://issues.apache.org/jira/ browse/HADOOP-3199), there is an FTP interface to HDFS, which permits the use of the FTP protocol to interact with HDFS. This interface is a convenient way to transfer data into and out of HDFS using existing FTP clients.

The FTP interface to HDFS is not to be confused with FTPFileSystem, which exposes any FTP server as a Hadoop filesystem.