As mentioned earlier, Sqoop imports a table from a database by running a MapReduce job that extracts rows from the table, and writes the records to HDFS. How does Map- Reduce read the rows? This section explains how Sqoop works under the hood.

At a high level, Figure demonstrates how Sqoop interacts with both the database source and Hadoop. Like Hadoop itself, Sqoop is written in Java. Java provides an API called Java Database Connectivity, or JDBC, that allows applications to access data stored in an RDBMS as well as inspect the nature of this data. Most database vendors provide a JDBC driver that implements the JDBC API and contains the necessary codeto connect to their database server. 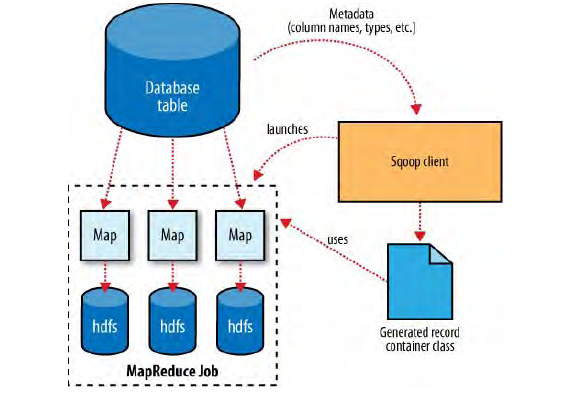 Based on the URL in the connect string used to access the database, Sqoop attempts to predict which driver it should load. You may still need to download the JDBC driver itself and install it on your Sqoopclient. For cases where Sqoop does not know which JDBC driver is appropriate, users can specify exactly how to load the JDBC driver into Sqoop. This capability allows Sqoop to work with a wide variety ofdatabase platforms.

Before the import can start, Sqoop uses JDBC to examine the table it is to import. It retrieves a list of all the columns and their SQL data types. These SQL types (VARCHAR, INTEGER, and so on) can then be mapped to Java data types (String, Integer, etc.), which will hold the field values in MapReduce applications. Sqoop’s code generator will use this information to create a table-specific class to hold a record extracted from the table.

The Widget class from earlier, for example, contains the following methods that retrieve each column from an extracted record:

More critical to the import system’s operation, though, are the serialization methods that form the DBWritable interface, which allow the Widget class to interact with JDBC:

JDBC’s ResultSet interface provides a cursor that retrieves records from a query; the readFields() method here will populate the fields of the Widget object with the columns from one row of the ResultSet’s data. The write() method shown above allows Sqoop to insert new Widget rows into a table, a process called exporting. Exports are discussed in “Performing an Export” .

The MapReduce job launched by Sqoop uses an InputFormat that can read sections of a table from a database via JDBC. The DataDrivenDBInputFormat provided with Hadoop partitions a query’s results over several map tasks. Reading a table is typically done with a simple query such as:

SELECT col1,col2,col3,... FROM tableName But often, better import performance can be gained by dividing this query across multiple nodes. This is done using a splitting column. Using metadata about the table, Sqoop will guess a good column to use for splitting the table (typically the primary key for the table, if one exists). The minimum and maximum values for the primary key column are retrieved, and then these are used in conjunction with a target number of tasks to determine the queries that each map task should issue.

For example, suppose the widgets table had 100,000 entries, with the id column containing values 0 through 99,999. When importing this table, Sqoop would determine that id is the primary key column for the table. When starting the MapReduce job, the DataDrivenDBInputFormat used to perform the import would then issue a statement such as SELECT MIN(id), MAX(id) FROM widgets. These values would then be used to interpolate over the entire range of data. Assuming we specified that 5 map tasks should run in parallel (with -m 5), this would result in each map task executing queries such as: SELECT id, widget_name, ... FROM widgets WHERE id >= 0 AND id < 20000, SELECT id, widget_name, ... FROM widgets WHERE id >= 20000 AND id < 40000, and so on.

The choice of splitting column is essential to efficiently parallelizing work. If the id column were not uniformly distributed (perhaps there are no widgets with IDs between 50,000 and 75,000), then some map tasks may have little or no work to perform, whereas others have a great deal. Users can specify a particular splitting column when running an import job, to tune the job to the data’s actual distribution. If an import job is run as a single (sequential) task with -m 1, then this split process is not performed.

After generating the deserialization code and configuring the InputFormat, Sqoop sends the job to the MapReduce cluster. Map tasks execute the queries and deserialize rows from the ResultSet into instances of the generated class, which are either stored directly in SequenceFiles or transformed into delimited text before being written to HDFS.

Sqoop does not need to import an entire table at a time. For example, a subset of the table’s columns can be specified for import. Users can also specify a WHERE clause to include in queries, which bound the rows of the table to import. For example, if widgets 0 through 99,999 were imported last month, but this month our vendor catalog included 1,000 new types of widget, an import could be configured with the clauseWHERE id >= 100000; this will start an import job retrieving all the new rows added to the source database since the previous import run. User-supplied WHERE clauses are applied before task splitting is performed, and are pushed down into the queries executed by each task.

When importing data to HDFS, it is important that you ensure access to a consistent snapshot of the source data. Map tasks reading from a database in parallel are running in separate processes. Thus, they cannot share a single database transaction. The best way to do this is to ensure that any processes that update existing rows of a table are disabled during the import.

Sqoop’s architecture allows it to choose from multiple available strategies for performing an import. Most databases will use the DataDrivenDBInputFormat-based approach described above. Some databases offer specific tools designed to extract data quickly.

For example, MySQL’s mysqldump application can read from a table with greater throughput than a JDBC channel. The use of these external tools is referred to as direct mode in Sqoop’s documentation. Direct mode must be specifically enabled by the user (via the --direct argument), as it is not as general-purpose as the JDBC approach. (For example, MySQL’s direct mode cannot handle large objects CLOB or BLOB columns, as Sqoop needs to use a JDBC-specific API to load these columns into HDFS.)

For databases that provide such tools, Sqoop can use these to great effect. A directmode import from MySQL is usually much more efficient (in terms of map tasks and time required) than a comparable JDBC-based import. Sqoop will still launch multiple map tasks in parallel. These tasks will then spawn instances of the mysqldump program and read its output. The effect is similar to a distributed implementation of mkparallel-dump from the Maatkit tool set.

Even when direct mode is used to access the contents of a database, the metadata is still queried through JDBC.