You can run a MapReduce job with a single line of code: JobClient.runJob(conf). It’s very short, but it conceals a great deal of processing behind the scenes. This section uncovers the steps Hadoop takes to run a job.

The whole process is illustrated in belowFigure . At the highest level, there are four independent entities:

The runJob() method on JobClient is a convenience method that creates a new JobClient instance and calls submitJob() on it . Having submitted the job, runJob() polls the job’s progress once a second and reports the progress to the console if it has changed since the last report. When the job is complete, if it was successful, the job counters are displayed. Otherwise, the error that caused the job to fail is logged to the console. 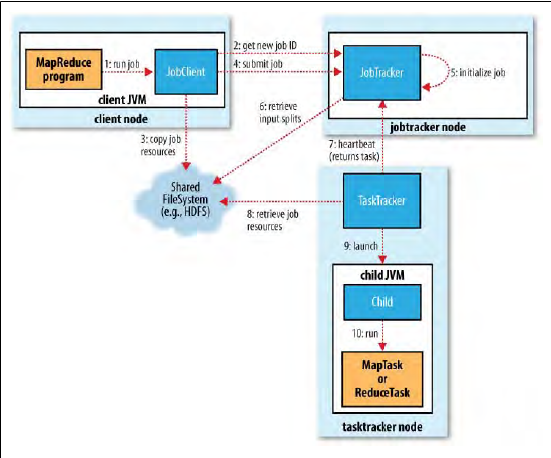 The job submission process implemented by JobClient’s submitJob() method does the following:

When the JobTracker receives a call to its submitJob() method, it puts it into an internal queue from where the job scheduler will pick it up and initialize it. Initialization involves creating an object to represent the job being run, which encapsulates its tasks, and bookkeeping information to keep track of the tasks’ status and progress (step 5).

To create the list of tasks to run, the job scheduler first retrieves the input splits computed by the JobClient from the shared filesystem (step 6). It then creates one map task for each split. The number of reduce tasks to create is determined by the mapred.reduce.tasks property in the JobConf, which is set by the setNumReduce Tasks() method, and the scheduler simply creates this number of reduce tasks to be run. Tasks are given IDs at this point.

Before it can choose a task for the tasktracker, the jobtracker must choose a job to select the task from. There are various scheduling algorithms as explained later in this chapter (see “Job Scheduling”), but the default one simply maintains a priority list of jobs. Having chosen a job, the jobtracker now chooses a task for the job.

To choose a reduce task, the jobtracker simply takes the next in its list of yet-to-be-run reduce tasks, since there are no data locality considerations. For a map task, however, it takes account of the tasktracker’s network location and picks a task whose input split is as close as possible to the tasktracker. In the optimal case, the task is data-local, that is, running on the same node that the split resides on. Alternatively, the task may be rack-local: on the same rack, but not the same node, as the split. Some tasks are neither data-local nor rack-local and retrieve their data from a different rack from the one theyare running on. You can tell the proportion of each type of task by looking at a job’s counters .

Now that the tasktracker has been assigned a task, the next step is for it to run the task. First, it localizes the job JAR by copying it from the shared filesystem to the tasktracker’s filesystem. It also copies any files needed from the distributed cache by the application to the local disk; see “Distributed Cache” (step 8). Second, it creates a local working directory for the task, and un-jars the contents of the JAR into this directory. Third, it creates an instance of TaskRunner to run the task.

TaskRunner launches a new Java Virtual Machine (step 9) to run each task in (step 10), so that any bugs in the user-defined map and reduce functions don’t affect the tasktracker (by causing it to crash or hang, for example). It is, however, possible to reuse the JVM between tasks; see “Task JVM Reuse”

The child process communicates with its parent through the umbilical interface. This way it informs the parent of the task’s progress every few seconds until the task is complete.

Both Streaming and Pipes run special map and reduce tasks for the purpose of launching the user-supplied executable and communicating with it (Figure).

In the case of Streaming, the Streaming task communicates with the process (which may be written in any language) using standard input and output streams. The Pipes task, on the other hand, listens on a socket and passes the C++ process a port number in its environment, so that on startup, the C++ process can establish a persistent socket connection back to the parent Java Pipes task.

In both cases, during execution of the task, the Java process passes input key-value pairs to the external process, which runs it through the user-defined map or reduce function and passes the output key-value pairs back to the Java process. From the tasktracker’s point of view, it is as if the tasktracker child process ran the map or reduce code itself.

MapReduce jobs are long-running batch jobs, taking anything from minutes to hours to run. Because this is a significant length of time, it’s important for the user to get feedback on how the job is progressing. A job and each of its tasks have a status, which includes such things as the state of the job or task (e.g., running, successfully completed, failed), the progress of maps and reduces, the values of the job’s counters, and a statusmessage or description (which may be set by user code). These statuses change over the course of the job, so how do they get communicated back to the client?When a task is running, it keeps track of its progress, that is, the proportion of the task completed. For map tasks, this is the proportion of the input that has been processed.

For reduce tasks, it’s a little more complex, but the system can still estimate the proportion of the reduce input processed. It does this by dividing the total progress into three parts, corresponding to the three phases of the shuffle (see “Shuffle and Sort” ). For example, if the task has run the reducer on half its input, then the task’s progress is ⅚, since it has completed the copy and sort phases (⅓ each) and is halfway through the reduce phase (⅙). 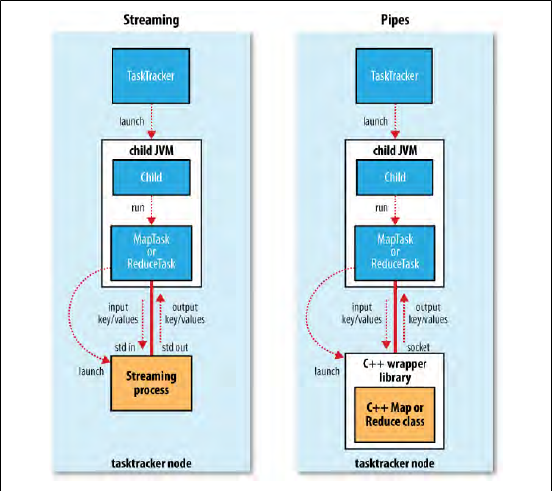 What Constitutes Progress in MapReduce?

Progress is not always measurable, but nevertheless it tells Hadoop that a task is doing something. For example, a task writing output records is making progress, even though it cannot be expressed as a percentage of the total number that will be written, since the latter figure may not be known, even by the task producing the output.

Progress reporting is important, as it means Hadoop will not fail a task that’s making progress. All of the following operations constitute progress:

Tasks also have a set of counters that count various events as the task runs (we saw an example in “A test run” ), either those built into the framework, such as the number of map output records written, or ones defined by users.

If a task reports progress, it sets a flag to indicate that the status change should be sent to the tasktracker. The flag is checked in a separate thread every three seconds, and if set it notifies the tasktracker of the current task status. Meanwhile, the tasktracker is sending heartbeats to the jobtracker every five seconds (this is a minimum, as the heartbeat interval is actually dependent on the size of the cluster: for larger clusters, the interval is longer), and the status of all the tasks being run by the tasktracker is sent in the call. Counters are sent less frequently than every five seconds, because they can be relatively high-bandwidth.

The jobtracker combines these updates to produce a global view of the status of all the jobs being run and their constituent tasks. Finally, as mentioned earlier, the JobClient receives the latest status by polling the jobtracker every second. Clients can also use JobClient’s getJob() method to obtain a RunningJob instance, which contains all of the status information for the job.The method calls are illustrated si given below

When the jobtracker receives a notification that the last task for a job is complete, it changes the status for the job to “successful.” Then, when the JobClient polls for status, it learns that the job has completed successfully, so it prints a message to tell the user and then returns from the runJob() method. 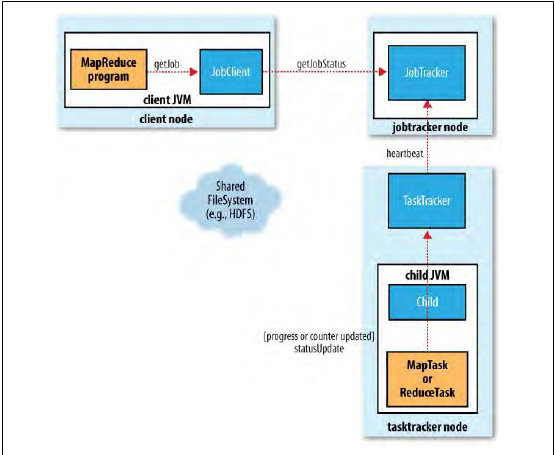 The jobtracker also sends an HTTP job notification if it is configured to do so. This can be configured by clients wishing to receive callbacks, via the job.end.notifica tion.url property.Last, the jobtracker cleans up its working state for the job and instructs tasktrackers to do the same (so intermediate output is deleted, for example)