The Federal Home Loan Mortgage Corporation (“Freddie Mac”) is a GSE chartered by the Congress of the United States in 1970 to improve the liquidity of the secondary mortgage market. Freddie Mac purchases mortgage loans from individual lenders and either sells securities backedby the mortgages to investors or holds the mortgages until maturity. Like Fannie Mae, Freddie Mac is similarly charged with providing access to mortgage finance for low-income families and underserved populations.Also like Fannie Mae, Freddie Mac is regulated by HUD for its housing mission and by OFHEO for safety/soundness issues. Freddie Mac maintains a direct line of credit with the U.S. Treasury.

In 2000, Freddie Mac issued $2.076 trillion in discount notes. While a tissuance these notes can range in maturity from overnight to 365 days,half of these notes have maturities of three days or less. The most popular maturities are one month and three months. Freddie Mac discount notes are offered for sale continuously with rates posted 24 hours a day (businessdays) through a group of investment banks that belong to the Freddie Mac dealer group. These notes are issued in book entry form through the Federal Reserve Bank of New York and a minimum face value of$1,000 with increments of $1,000 there after. The pricing conventions are the same as U.S. Treasury bills.

Figure below presents a Bloomberg DES (Security Description) of a 3-month Reference Bill that was auctioned on September 11, 2001 and matures on September 25, 2001. Figure below presents YA (Discount/Yield Analysis). Note the yield on a bank discount basis for this Reference Bill is 2.28154. Given the yield on a bank discount basis, the price is found the same way as the price of a Treasury bill in Chapter by first solving for the dollar discount (D) as follows:

t = number of days until maturity

The price is then 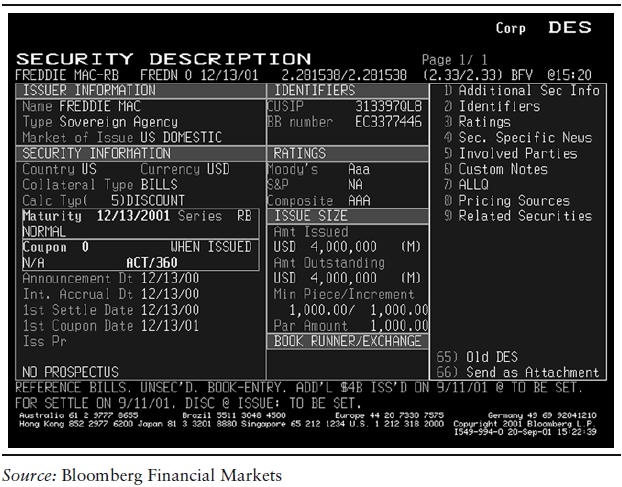 This calculation agrees with the price displayed in the box on the upperleft-hand side of the screen in Figure below.

The notation is the same as above. 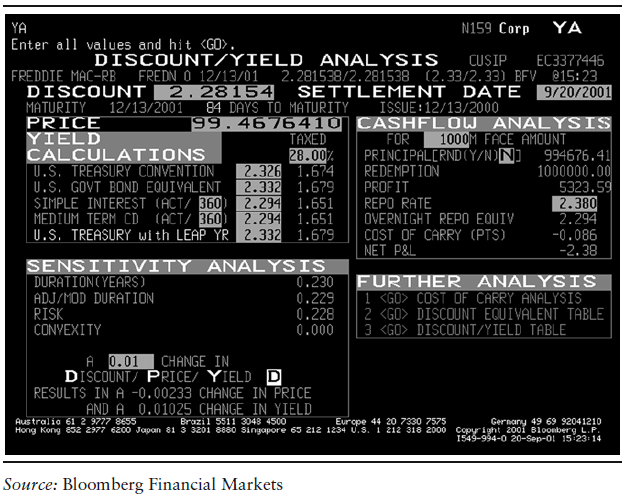 This calculation agrees with the yield presented in the screen.Just above the CD yield is simple interest. Simple interest is the ratio of the cash flow to be received from holding the security until maturity(i.e., the discount) to the security’s price annualized on the basis of a 360-day year. Recall from Chapter, the simple interest formula is simply

To illustrate the calculation, let’s us continue to use the Reference Billin Figure below. The simple interest (ACT/360) is computed as follows:

This calculation agrees with the one presented in the screen.

Another frequently used is called the bond-equivalent yield. This yield measure makes a yield quoted on a bank discount basis more comparable to yields on coupon Treasuries that use an actual/actual day count convention. Recall, the calculation of a bond equivalent yield depends on whether the discount instrument has 182days or less to maturity or more than 182 days. If the maturity is 182days or less, the calculation of the bond-equivalent yield is very straight forward. Let’s tackle the more involved case and consider a Reference Bill that has a maturity longer than 182 days.

When a discount instrument like a Reference Bill has a current maturity of more than 182 days, converting a yield on a bank discount basis into a bond-equivalent yield is more involved. Specifically,the calculation must reflect the fact that a Reference Bill does deliver cash flows prior to maturity while a coupon bond delivers coupon payments semiannually and the semi annual coupon payment can be reinvested. 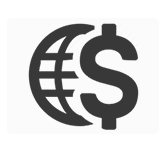