Many people do not realize how few games are profitable. In 2001 over 3,000 games were released for the PC platform; it is likely only 100 or so of those titles turned a profit, and of those only the top 50 made significant money for the developers and publishers.

In 2000 an established developer in North America would likely receive between $1 million and $3 million in advances paid out over 12 to 36 months for the development of a game. The typical publisher will spend between $250,000 and $1.5 million in marketing and sales development (“sales development” is the euphemistic term for the money the publisher must spend to get the game actually on the shelf at the retailer and well positioned). The box, CDs, maps, manual, and other materials in the box cost between $1.50 and $4.00 collectively. The royalties an established developer could expect vary widely, from 10 to 30 percent, depending on many factors including how much of the financial risk the developer is assuming and the types of deductions to the wholesale price. Let’s take a look at what these numbers mean for a game that has an average retail price of $35 over the life of sales in the first 12 to 24 months after release. Table summarizes the financial assumptions behind this hypothetical project.

The darkened boxes represent the number of successful games published each year. 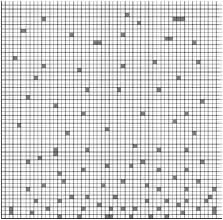 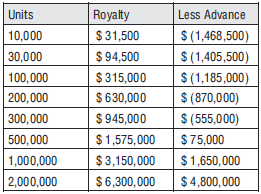 500,000 Units to Break Even?
Take a long hard look at Table. Notice that not until 500,000 units have been sold does the developer see a royalty check. This is a $75,000 check that is likely to be issued to you between 9 and 18 months after release of the title. The conclusion from this is that royalties alone will not feed you and your team post-release. “No problem,” you think, “my title will sell millions!” Unfortunately, even good games don’t always sell many units. As an example, the excellent developer Raven sold a little over 30,000 units of the strong game Hexen II. Messiah, the longanticipated edgy first-person shooter, saw fewer than 10,000 units sold in its first three months (most games make the large bulk of their sales in the first 90 days of release).

Fallout 1 enjoyed a loyal fan following and strong critical reviews and sold a little more than 120,000 units in its first year. The author’s Starfleet Command 1 sold over 350,000 units its first year without counting the Gold Edition and the Neutral Zone expansion. However, the sequel, Starfleet Command 2, has sold 120,000 units in its first six months of release. Sure, Diablo II from Blizzard enjoyed over 2 million units of orders on day one of release, and The Sims has been in the top 3 of PC Data for almost a year and a half. These titles have clearly made a ton of money. In fact, those orders that Blizzard had for Diablo II on day 1 had a value that exceeds the market capitalization of Interplay Entertainment1—a publisher with a rich publishing history spanning over 15 years.

Employee Compensation and Royalties
Table has other implications. Many development houses share royalties they receive with their employees by some fraction. Many developers go even further and offset the often too-low salaries paid in the highly competitive game business with overly optimistic promises of future royalty payments. These promises are meaningless in many cases: After the employees crunch through development and release and even during post-release, supporting the fans, these expectations of monetary rewards for their labor turn out to be false. Then these employees turn from energetic, highly productive creative developers to disenfranchised employees looking for a new job.