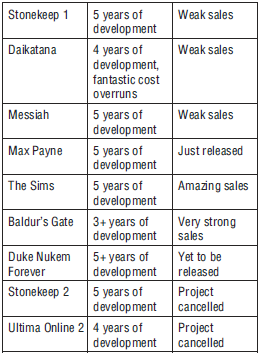 Take a look at it listing game projects, how long they took to release,and the outcome.This table is a Who’s Who of games that have run horribly over budget, and only two games on that list have made significant money: The Sims and Baldur’s Gate. The best selling game on the list, The Sims, has made and is continuing to make a huge fortune for Electronic Arts. Why is it that The Sims has made the most money on that list? Because Electronic Arts was very fortunate that no one else (that statement is worth repeating) no one in the entire PC game industry of some 3,000 titles a year for five years in a row has released a title even remotely competitive to The Sims, filling a vastly underserved market of women who are consumers waiting for games to be designed for them. And with the right title EA can make tons of money due to its marketing and sales strength; this cannot be underestimated.

Also note that Maxis released something like ten games in the sims genre and only two of these, SimCity and The Sims, have generated great returns over ten years. The rest of the sim-type games were relatively poor sellers. This is something that seems to be forgotten by a lot of people—that Will Wright has been xperimenting with this type of game for ten+ years before hitting a home run with The Sims.

Max Payne has just been released, and we need a little time to see how the market will respond to this adventure shooter with amazing graphics (I expect this game to do well). The other successful title on the list, Baldur’s Gate, had a number of delays and development extensions but ultimately was still successful: The Baldur’s Gate series (BG with its expansion pack and sequel/expansion pack) has sold nearly 4 million units worldwide. It came at the right time for role-playing games and was a quality title with a strong license (Advanced Dungeons and Dragons) behind it.

As for the rest of the titles, they were simply too-little too-late titles that had to compete against stronger games that were produced faster and for less money. Or in the case of Stonekeep 2 and Ultima Online 2, there were millions of dollars of game development and even the hype of game magazine covers that the publishers had to walk away from when the games were cancelled!

What Late Games Do to Publishers
When projects run over, even by less than three years, they hurt the industry at large. Consumers are tired of being frustrated by overly hyped games that are late. The publishers are constantly attempting to make realistic financial projections to manage their cash flow and maintain investor confidence. With poor cash flow or low investor confidence, a publisher is often forced into publishing more titles. More titles mean each receives less attention at every stage of development. This in turn weakens the publisher more, as titles begin to ship before they are ready in order to fill gaps in the quarter. This creates a vicious feedback cycle that pressures the publisher to publish even more titles.