The various possibilities are summarized in the form of a chart below:
FORWARD CONTRACT 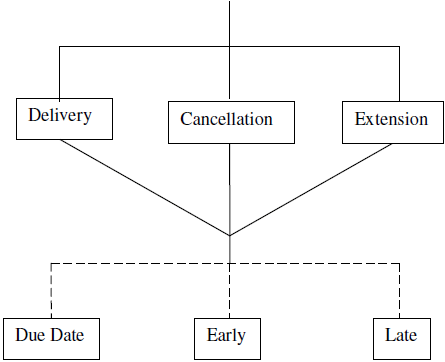 From chart it is clear that a forward contract may end up in any of the following ways:

Delivery on Due Date
This is the situation envisaged when the forward contract was entered into. When the foreign exchange is delivered on the due date, the rate applied for the transaction would be the rate originally agreed, irrespective of the spot rate prevailing. The following example and solution may explain the practice of delivery on due date contract.
Example: The bank has entered into a contract of forward purchase of Swiss Francs 10,000 with a customer at the rate of Rs.32,5000. On the due date, the spot rate of Rs.32,7600/8200. State the amount that will be credited to the account of the customer on purchase of the bill.
Solution: The bank would apply the rate of Rs.32,5000 as originally agreed for purchase of the bill. The amount credited to the account would be Rs.3,25,000.
Example: On 1st March, the bank enters into a forward contract for 2 months for selling USD at Rs.46,6600. On 1st May, the contract is put through in retirement of a bill for USD 1,000 drawn on the customer. On this date, the sopt rates are Rs.49,3100/5600. Calculate the amount that would be debited to the account of the customer.
Solution: The bank would apply the rate originally agreed upon, i.e. Rs.46,6600 and debit the account of the customer with Rs.48,660.

The various operations involved may be summarized thus: 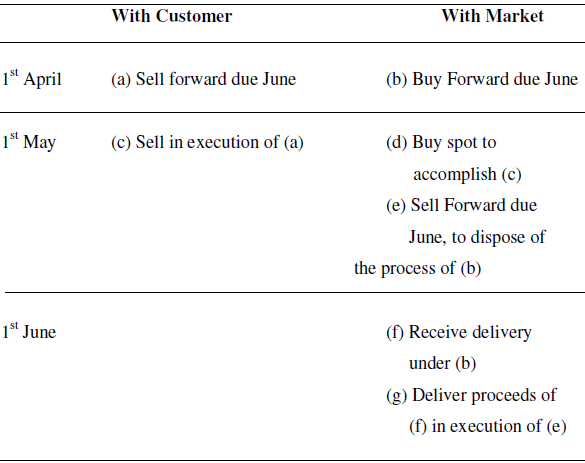 On 1st May, the bank makes a spot purchase and forward sale of the same currency for the same value. The difference between the rate at which the currency is purchased and sold in a swap deal is the swap difference.
The swap difference may be a ‘swap loss’ or ‘swap gain’ depending upon the rates prevailing in the market. If the bank buys high and sells low, the differences is swap loss recoverable from the customer. If the bank buys low and sells high, the difference is the swap gain payable to the customer.
On 1st May, the bank receives rupees from the customer on sale of foreign exchange to him. It pays rupees to the market for the spot purchase made. If he amount paid exceeds the amount received, the difference represents outlay of funds. Interest on outlay of funds is recoverable from the customer from the date of early delivery to the original due date at a rate not lower than the prime lending rate of the bank concerned.
If the amount received exceeds the amount paid, the difference represents inflow of funds. At its discretion, the bank may pay interest to the customer on inflow of funds at the appropriate rate applicable for term deposits for the period for which the funds remained with it.

Charges for early delivery will comprise of:

In addition, at its discretion, the bank may levy some processing charges.