Football How to Play - Football

How to play the game of Football?

Anyone who desires to play the game of football must be more energetic, tactful and fit. The person should have more stamina as the game involves non-stop running by the players. The players should have the team spirit and at the same time should concentrate on the performance of the individual. A player who want to play the game of football should be trained hard and should play and run faster when compared to that of the opponent.

The match of football always begins by tossing a coin. For tossing both the match referee and the captains of both the teams meet at the center of the field. Whoever wins the toss will decide the side of the goal and the post of the goal in the first half. The ball is first kicked-off by the team that begins the match.

All the players of the respective teams will take the position in their own half of the field. Once all set for the game, whistle is being blown by the referee and one of the players from the team which has lost the toss will come and start the game by kicking the ball. And the ball should be next touched by any other player and not the player who has initially kicked the ball. Once the game has finished the first half, during the second half of the game, the goals of both the teams will be switched.

What are the essential skills required for playing Football?

The player should possess or acquire the following skills for playing the game of football. They are as follows -

Learn to dribble – One of the important acts for the game of football is to dribble. When the player controls the ball while maintaining the possession of the ball is known as dribbling. It is very important that the player should dribble so that the ball can be touched strongly and move forward but care should be taken that the ball does not move much farther.

Learn to shoot – The player near the goal should shoot to ball to score a goal. For shooting a ball, the player should have power and accuracy. The angle of the foot should be set first and aim for the goal and accordingly shoot the ball.

The player who is not near to the ball requires to run a lot and in that situations the next move of the teammates has to be estimated by the player and should take the position accordingly where the teammates expects the player to be.

Learn to head the ball – Sometimes the player also uses the forehead to pass on the ball to the teammates. This happens frequently when the goal is being scored after the corner kick.

Learn to juggle – It is important for the player to know and learn how to juggle. Juggling helps the player to have control on the ball which is coming towards him in the air.

What are the different rules and regulations of the football match?

There are some rules that need to be followed for playing the game of football. They are as follows -

One of the important rules to be followed in the game of football is offside offence. This rule is designed to stop the players from forming a group and spending a lot of time at the goal of the opponent. The player is considered in an offside position when the player is in the opponent’s half and is behind the last defender.

Free kick – When the opponent team has made any foul, the other team is given the chance of penalty in the form of Free Kick. The different types of Free Kick are as follows -

Corner kick – When the ball passes through the goal line but does not go into the goal without being touched by the team member of the defending team is known as Corner kick.

Goal kick – When the ball passes through the goal line and does not go into the goal but being touched by the team member of the defending team, it is known as Goal kick. 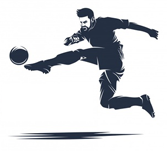