At the time the shipping company transfers custody and control of food to CARE, its agent or counterpart, most donors require that an independent survey or be contracted to determine the amount and condition of food received against the Bill of Lading.

CARE or its counterpart must determine if fees are equitable for the services prior to contracting a surveyor. Most donors require and pay for the discharge survey.

For Euronaid food, Euronaid will arrange for a surveyor for both vessel discharge and at the final destination.

For U.S. Government food, CARE is required to engage the service of an independent surveyor for the ex-tackle survey, unless:

The country office should contact the local USAID mission or agricultural attaché to determine if surveys are necessary. Discharge surveys are almost always required as they are needed to pursue claims for losses against the ocean carrier.

If not paid in advance by the donor, discharge survey fees are reimbursable through the CI Headquarters office procuring the food. The country office must submit:

The costs of the surveys should be written directly into the project proposals, agreements and budgets if the donor does not have are imbursement policy.

Donors may require other documentation to support marine claims against shipping companies. See Port for a discussion of other reports that may have to be filed along with independent discharge survey report.

For food that is dispatched from port warehouses to a designated inland warehouse, donors and country offices often arrange for the independent surveyor to carry out a Delivery Survey at the time the food arrives inland. The survey is important in fixing responsibilities for losses of food while in the custody of a port authority and during transport. Costs should be written into project proposal budgets, and included in agreements with the donor.

In addition to Discharge and Delivery Survery Reports filed by independent surveyors, CARE or counterpart port officers, clearing and forwarding agents, and warehouse managers or storekeepers are all required to prepare Loss and Adjustment Reports for receipt of more or less food than stated on Bills of Lading and waybills.

Loss and Adjustment Reports are for:

Internal excess deliveries to warehouses - with waybill as supporting document. 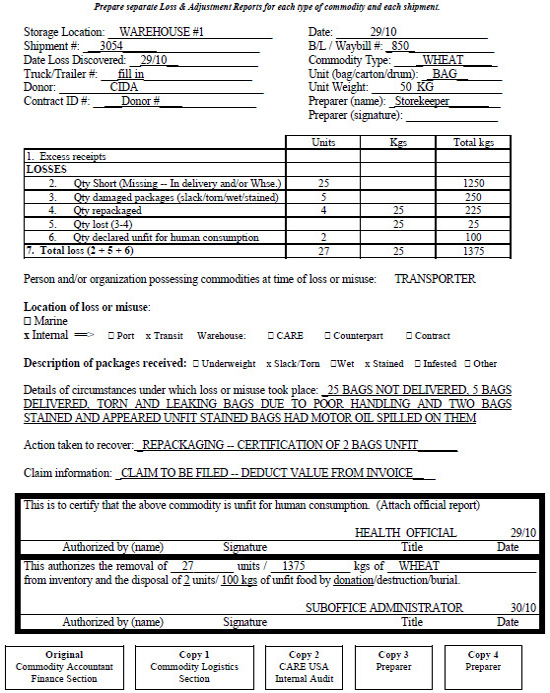 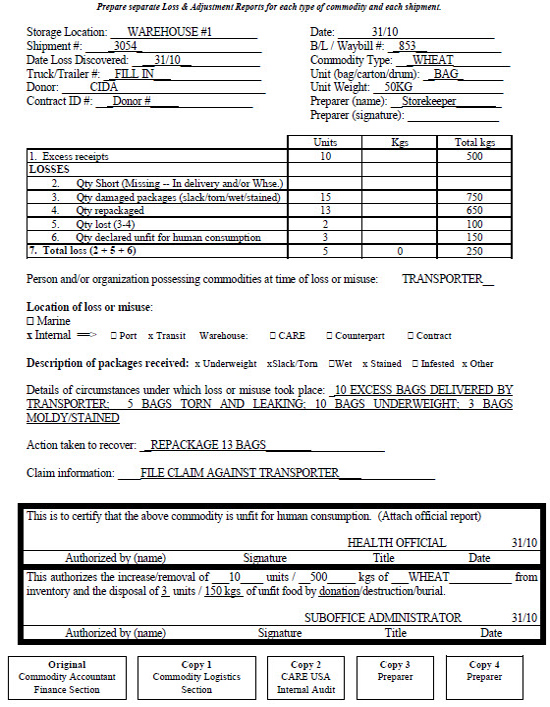 Loss and Adjustment Reports must be pre-printed and pre-numbered. Distribution of blank reports should be controlled by the same procedures used to distribute blank checks or blank waybills.

Staff who are responsible for warehouses or other areas where food is prepared prepare Loss and Adjustment Reports. For example, a warehouse storekeeper prepares the report for losses occurring in a warehouse during receipt and dispatch of food and for any losses discovered during repackaging or when reconciling physical inventories with warehouse inventory ledgers. A commodity accountant in the finance section prepares the report when there are differences between what was dispatched from a warehouse and what was received at a distribution center.

200 cartons of oil were dispatched to a distribution site by a regional warehouse, but only 175 cartons were delivered. The loss was discovered when the transport company submitted the waybill with its invoice for payment. The Receipt Information section of the waybill showed that only 175 cartons were delivered to the site. The commodity accountant then prepared the Loss and Adjustment Report and recorded the transaction in the commodity inventory ledgers.

Every Loss and Adjustment Report must be authorized. Other than waybills, this is the only support document used to increase or decrease food balances in commodity and warehouse inventory ledgers. Given the importance of this transaction, persons who prepare the reports should not be the same persons who authorize changes in inventory. To satisfy the principles of internal control, there must be a segregation of responsibilities.

An original and four copies of the Loss and Adjustment Report are prepared and submitted to the person authorized to approve it. Once approved, the person authorizing the report is responsible for assuring that all copies are routed to the appropriate persons or departments for further action. The table below summarizes routing and shows how the copies are used.

Routing of Loss and Adjustment Reports

Because of distance and communication problems, there may be delays in authorizing Loss and Adjustment Reports, returning them to warehouses, and adjusting inventory records. However, the importance of controlling adjustments to inventories outweighs the inconvenience caused by any delays.

The Monthly Loss Report is a summary of all Loss and Adjustment Reports for the month by donor. If there is more than one region, each region should submit its Monthly Loss Report to the country office’s Food and Logistics section or other authorized managers who then will aggregate the regional reports into a country-wide Quarterly Loss Report.

The report provides managers with more detailed information on losses than are reported on Commodity Status and Quarterly Consolidated Reports.

Preparation of Monthly Loss Reports should coincide with closure of warehouse inventory ledgers and preparation of Commodity Status and Quarterly Consolidated Reports. The format can be used for all donors, with additional columns inserted for codes required by AID.

Quarterly Loss Reports should be prepared by CARE country offices no later than forty-five (45) days after the end of each quarter and submitted to CARE USA, other CI members and donors by numbered, transmittal letter.

The report should accompany Quarterly Commodity and Recipient Status Reports. In emergencies, reports may be required more frequently, weekly or even daily.

The following table provides specific donor reporting requirements, however, country offices should submit quarterly loss reports in addition to the requirements set out in the table.

If country offices suspect or discover losses due to criminal activity, they must promptly notify, in writing, their regional managers and the Food Security Unit CARE USA, CI members for non-U.S. donated food, and donors. All parties must be kept regularly informed of all efforts to recover the lost food or an equivalent monetary value. 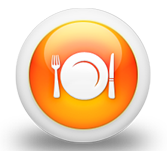