If everything works as designed, the Firebird server process will be running on your server when the installation finishes. You can run some tests to verify the installation and work out any adjustments you might need in your configuration.

At this point, it is assumed that you will use the recommended TCP/ IP protocol for your Firebird client/ server network, to take advantage of the benefits of platform-independent networking.

Usually, the first thing you will want to do once installation is complete is ping the server. This just gives you a reality check, to ensure that your client machine is able to see the host machine in your network. For example, if your server’s IP address in the domain that is visible to your client is 192.13.14.1, go to a command shell and type the following command:

If you are connecting to the server from a local client—that is, a client running on the same machine as the server —you can ping the virtual TCP/IP loopback server:

Checking That the Firebird Server Is Running

Use the ps command in a command shell to inspect the running processes. If any clients are connected to a Firebird Classic process, you should see one process named fb _inet _server (or gds_inet_server for Firebird 1.0.x) for each connected client. The ps command has several switches, but the following will provide a satisfactory list. The grep command will filter the output so you only see the Firebird processes:

Because Superserver forks off a thread for each connection, it is interesting to throw the –f[ork] switch into the mix for examining its processes and threads. You get a formatted display of the forking processes, similar to Figure:

The same ps command should show one process named fbguard (or ibguard) if the server was started with the –f[orever] switch, and one main process named fbserver (or ibserver). There will be at least one child process thread named fbserver (or ibserver) forking off one more such process thread. This first group is “the running server,” sans any client connections except those that the server uses for listening on ports and for garbage collection. Beyond that will be a group of threads for each connection.

For the Windows server platforms, start the Firebird Server Control applet from the Control Panel.

Figure shows the Firebird Server Control applet display on Windows 2000 Server. If you used the installer, this applet will have been installed to your Control Panel. Its appearance may vary from one Windows server edition to another. 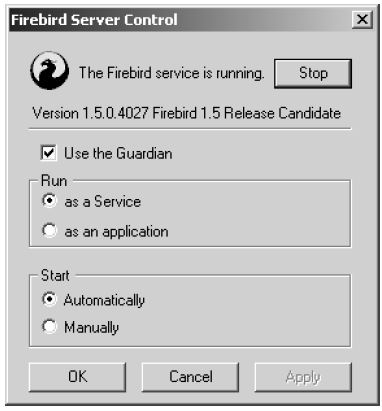 You can use the applet to start and stop the service and to modify the start and run options. It is not recommended to change to “Run as an application” for multi-user use, for security reasons—you have to leave the server logged in to keep the server running.

If you have no Control Panel applet, you can inspect the Services applet in the Administration Tools display. On NT 4, you can access this applet directly from the Control Panel.

On Windows 2000 and Windows Server 2003, the Guardian is a convenience rather than a necessity, since these two operating systems have the facility to watch and restart services. It is recommended that you keep the Guardian active for other platforms if a SYSDBA is not available to restart the server manually in the event that it is stopped for some reason.

Windows 9x, ME, and XP Home

Windows 9x, ME, and XP Home do not support services. Firebird server should be running as an application, monitored by the Guardian. If you used an installation kit that installed but did not automatically start the Guardian and the Firebird server, you can set it up manually, as follows:

The Guardian should start up automatically the next time you boot your machine.

Some versions of the Server Control applet can be installed on a non -services -capable Windows platform. If the installer installs one for you, then it can be used in a similar manner as previously described for the services -capable versions. It will not be possible to choose a “Run as a service” option, if it is displayed. On the Home versions of Windows, to avoid confusion, the better applets hide or gray-out the option.