A privilege represents permission to perform a DML operation. Table lists the SQL privileges that can be granted and revoked. 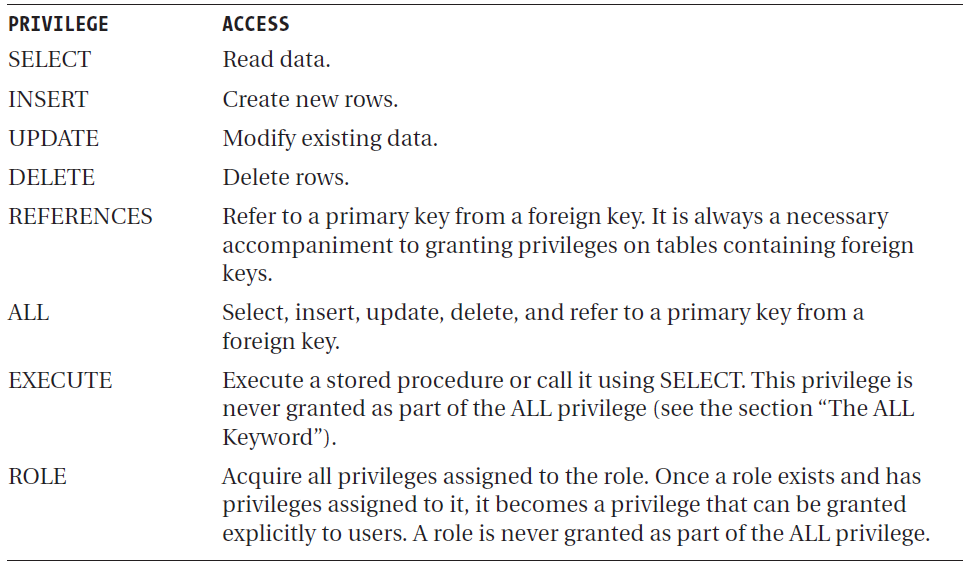 Firebird SQL implements features for packaging multiple privileges for assignment to individual recipients, lists, or special groupings of users. One is the ALL package, another is comma-separated lists, and yet another is SQL roles.

The ALL keyword packages the SELECT, INSERT, UPDATE, DELETE, and REFERENCES privileges in a single assignment. Roles and the EXECUTE privilege are not included in the ALL package.

A role is created in a database and is available only to that database. Think of a role as a container for a bundle of privileges. Once the container is “filled” by having some privileges granted to it, it becomes available to be assigned —as a privilege—to some types of users.

A role can never be granted as part of the ALL package, although a role can be granted ALL privileges.

Roles Are Not Groups

Roles are not like operating system user groups. A Firebird user can be assigned more than one role, but can log in under only one role in a session.

Firebird supports UNIX groups on POSIX platforms. If system-level authentication is implemented, you can grant privileges to UNIX groups. Refer to the TO GROUP <UNIX-group> option for GRANT and REVOKE.