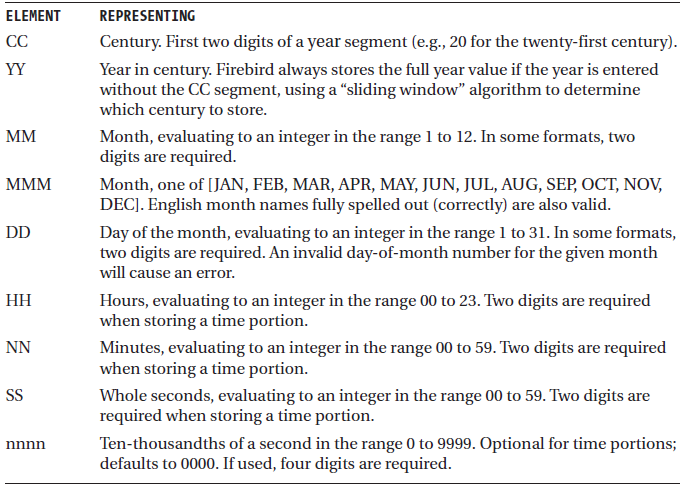 The recognized formats are described in Table. 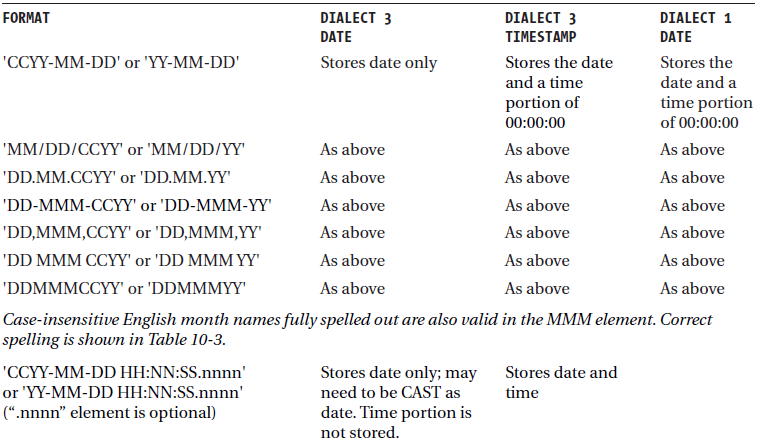 Whether the year part of a DATE or TIMESTAMP literal is submitted in SQL as CCYY or YY, Firebird always stores the full year value. It applies an algorithm in order to deduce the CC (century) part, and it always includes the century part when it retrieves date types. Client applications are responsible for displaying the year as two or four digits.

To deduce the century, Firebird uses a sliding window algorithm. Its effect is to interpret a two-digit year value as the nearest year to the current year, in a range spanning the preceding 50 years and the succeeding 50 years.

For example, if the current year were 2004, two-digit year values would be interpreted as shown in Table.

Nothing causes more confusion for international users than Firebird’s restricting the use of the forward slash character (/) to only the U.S. 'MM/DD/CCYY' format. Although almost all other countries use 'DD/MM/CCYY', Firebird will either record the wrong date or throw an exception with the date literal using the 'DD/MM/CCYY' convention.

Note that Firebird does not honor the Windows or Linux date locale format when interpreting date literals. Its interpretation of all-number date formats is decided by the separator character. When dot (.) is used as separator, Firebird interprets it as the non-U.S. notation DD.MM, whereas with any other separator it assumes the U.S. MM/DD notation. Outside the U.S. date locale, your applications should enforce or convert locale-specific DD/MM/CCYY date input to a literal that replaces the forward slash with a period (dot) as the separator. 'DD.MM.CCYY' is valid. Other date literal formats may be substituted.

Spaces or tabs can appear between elements. A date part must be separated from a time part by at least one space.

The twenty-fifth (25) day of the sixth month (June) in the year 2004 can be represented in all of the following ways: