How to Get an Installation Kit - Firebird

The main page of the Firebird site usually displays a list of links to the latest releases for Linux and Windows. Other links will point you to distributions for other platforms. If a file has “src” in its name, it is buildable source code, not an installable kit.

All of the kits contain all of the components needed to install the Firebird server:

File naming of kits across platforms is not consistent. Alas, it is not even “consistently inconsistent,” with builders often needing to conform to platform-specific conventions or simply making their own rules. However, certain elements in the file names will help you to identify the kit you want.

In general, the first part of the name string is “Firebird.”

All release kit names should contain a dot-separated string of numbers in the following order: version number, release number, sub-release number. For example, “1.0.3” is the third sub-release of the initial (C code) release of Firebird version 1, while “1.5.0” is the initial sub-release of the release 5 (C++ code) of version 1. Most kits also include the absolute build number (e.g., 1.0.3.972 or 1.5.0.4306). For some minor platforms, especially those that impose their own naming rules and build on different compilers, version numbers may be less obvious.

For platforms that require a special build to support 64-bit I/O, you should look for the infix “64IO” somewhere in the name string. It will not be present in the names of kits for operating systems that provide 64-bit I/O support automatically, if it is available. Do not try to install a kit marked “64IO” on a version of that OS or hardware that does not support 64-bit I/O.

CPU architecture is usually included in the name string of the kit. For example, RPM installers for Linux generally include a chipset designator (e.g., i686). The showfiles display in the download list is generally a more useful indicator of the minimum chipset supported by the distribution. Assume Solaris kits are for Intel unless the “SPARC” tag is present in the kit name.

Once you find the required kit, click its hyperlinked file name. You will be directed to a list of mirror sites around the world, as shown in Figure. 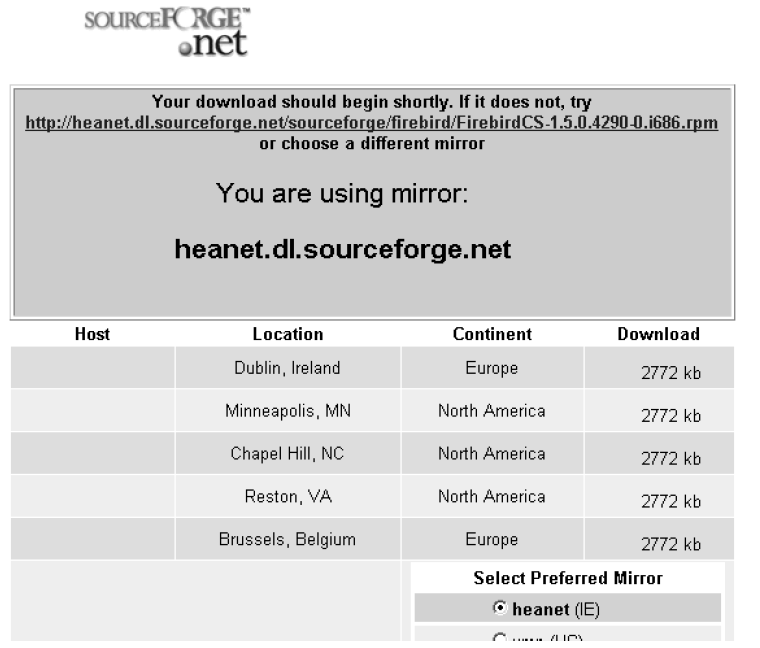 It does not matter which mirror site you choose—the download kits are identical at all sites.