The internally defined exceptions are thrown by the engine in response to corresponding errors that require execution to stop. They cover a very large range of conditions, including every kind of constraint violation, arithmetic and string overflows, references to missing objects, data corruption, and so on. The SQLCODE and GDSCODE exceptions are the same ones that are used when errors occur during dynamic SQL operations.

Custom exceptions, which are available only in PSQL modules, do not need to duplicate the work of the internally defined ones. Define your exceptions for use when you want your code to detect error conditions that break your business rules. The three exception types are depicted in Figure. 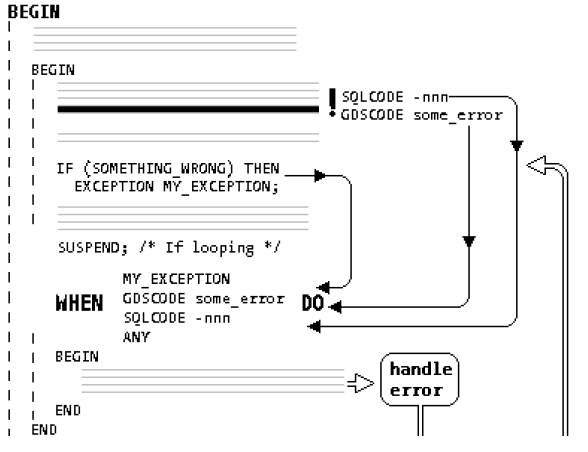 We encountered an example in Chapter Stored Procedures in which a custom exception was used in a trigger for the purpose of stopping an event, where letting it continue would break a business rule. In this case, a stored procedure was taking care of tidying up dependencies left in the organizational structure by the departure of an employee. It was declared like this:

There are cases where it is possible to use the custom exception as a way to intervene, deal with a problem condition, and let the procedure continue. We can trap the exception and write code to handle it, right there in the procedure. The next section examines how this trap-and-fix technique can be used to deal with our reassign_sales exception.