Investment bankers assist client corporations in the offering process in a variety of ways, including the following:

In summary, the investment banker is an important source of financial market expertise and an important part of the security offering process.

How Securities Are Sold

Firms can sell securities in the primary capital markets in one of three ways:

Investment bankers usually assist firms in all three methods of sale. Figure 8.3 is a flowchart that outlines the various methods and steps for the sale of corporate securities.

Underwriting can be accomplished either through negotiations between the underwriter and the issuing company or by competitive bidding. A negotiated underwriting is simply an arrangement between the issuing firm and its investment bankers. Most large industrial corporations turn to investment bankers with whom they have had ongoing relationships. In competitive bidding, the firm sells the securities to the underwriter (usually a group) that bids the highest price.Many regulated companies, such as utilities and railroads, are required by their regulatory commissions (for example, the Federal Energy Regulatory Commission, the Interstate Commerce Commission, and state regulatory bodies) to sell new security issues in this way.

How Securities Are Sold:A Flowchart 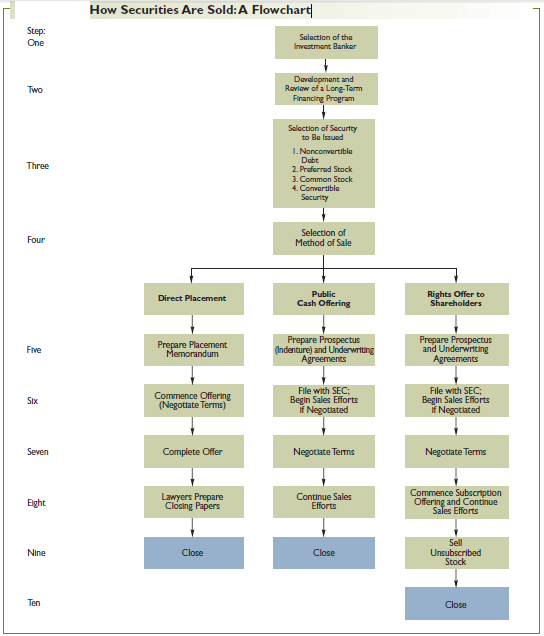 Security issues sold to the public through underwriters normally exceed $25 million in size; amounts totaling several hundred million dollars (particularly bond issues) are not uncommon. Due to the size of these issues, individual investment bankers usually do not want to underwrite an entire issue by themselves.Normally, a group of underwriters, called a purchasing syndicate, agrees to underwrite the issue in order to spread the risk. Sometimes the purchasing syndicate can sell an entire issue to large institutional investors; this is often true with high -quality debt issues.

Private Placements Many industrial companies choose to directly, or privately, place debt or preferred stock issues with one or more institutional investors instead of having them underwritten and sold to the public. In these cases, investment bankers who act on behalf of the issuing company receive a “finder’s fee” for finding a buyer and negotiating the terms of the agreement. The private market is an important source of long-term debt capital, especially for smaller corporations.

Private security placements have a number of advantages:

An offsetting disadvantage is that, as a very general rule, interest rates for private placements are about one -eighth of a percentage point higher than they are for debt and preferred issues sold through underwriters. For small debt and preferred stock issues —that is, those that are less than about $20 million —the percentage cost of underwriting becomes fairly large. Because of this, these smaller issues are frequently placed privately with institutional investors.

Rights Offerings and Standby Underwritings Firms may sell their common stock directly to their existing stockholders through the issuance of rights, which entitle the stockholders to purchase new shares of the firm’s stock at a subscription price below the market price. (Rights offerings also are called privileged subscriptions.) Each stockholder receives one right for each share owned; in other words, if a firm has 100 million shares outstanding and wishes to sell an additional 10 million shares through a rights offering, each right entitles the holder to purchase 0.1 shares, and it takes 10 rights to purchase one share.

Rights offerings have declined in popularity as a method of raising equity capital in the United States.However, in the United Kingdom, rights offerings are more common. In October 1992, British Aerospace attempted an underwritten rights offering totaling $732 million (£432 million). The offering price was 380 pence per share. Unfortunately, the price of British Aerospace stock declined to 363 pence during the period of the offering and only a small portion (4.9 percent) of the offering was purchased by rights holders. The underwriters were forced to take large losses on the offering when they were stuck with the balance of the issue.

Direct Issuance Costs An investment banker who agrees to underwrite a security issue assumes a certain amount of risk and, in turn, requires compensation in the form of an underwriting discount or underwriting spread, computed as follows:

Examples of underwriting spread amounts are shown in table. It is difficult to compare underwriting spreads for negotiated and competitive offerings because rarely are two offerings brought to market at the same time that differ only in the ways in which they are underwritten. Generally, underwriters receive lower spreads for competitively bid utility issues than for negotiated industrial offers. This is primarily because utilities tend to have a lower level of risk than industrial companies. In addition to the underwriting spread, other direct costs of security offerings include legal and accounting fees, taxes, the cost of registration with the Securities and Exchange Commission, and printing costs. For small equity offerings of less than $10 million, these direct costs may exceed 10 percent of the gross proceeds from the offering, on average.

For offerings with gross proceeds in the $20 million to $50 million range, direct costs averaged slightly less than 5 percent of gross proceeds. For large equity offerings (greater than $200 million), the direct issuance costs have averaged about 3.3 percent of gross proceeds.11 An offering of 1.35 million shares of common equity by Service Corporation International had an underwriting spread of $2,160,000 and other direct issue expenses of $280,564. Direct costs of underwritten debt offerings are much lower than direct equity issuance costs, often ranging from 0.5 percent to 4.0 percent. 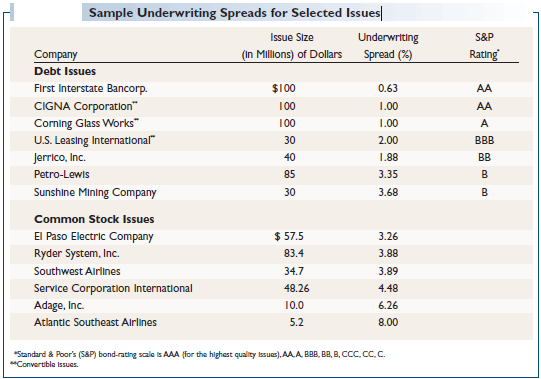 Other Issuance Costs In addition to direct costs, there are significant other costs associated with new security offerings, including

These indirect costs can, in aggregate, constitute a very significant expense associated with security offerings (especially for common equity). Ritter has estimated that the sum of direct issue costs and underpricing for new equity offerings averages over 31 percent for best -efforts offerings and over 21 percent for firm commitment underwritings.

After a company has filed a registration statement and prospectus, there is normally a waiting period of 20 days before the SEC approves the issue and the company can begin selling the securities. During the waiting period, the company may use a preliminary prospectus in connection with the anticipated sale of securities. This preliminary prospectus is often called a “red herring” because it contains a statement, usually marked in red, saying that the prospectus is “not an offer to sell.” When the registration statement is approved by the SEC, the new securities can be formally offered for sale. All buyers of the new securities must be provided with a final copy of the prospectus.

By placing its new securities “on the shelf” awaiting an opportune time for issuance, the company has the capability to time their issuance with the specific financing needs of the firm and to take advantage of perceived favorable pricing windows in the market. There is some evidence that the shelf registration procedure is less costly than traditional underwriting for equity offerings.15 In spite of this apparent cost advantage, shelf registrations of new equity offerings have not been popular.