A term loan, or intermediate-term credit, is defined as any debt obligation having an initial maturity between 1 and 10 years. It lacks the permanency characteristic of long -term debt. Term loans are well suited for financing small additions to plant facilities and equipment, such as a new piece of machinery. These loans can also be used to finance a moderate increase in working capital when

Term loans are often preferable to short -term loans because they provide the borrower with a certain degree of security. Rather than having to be concerned about whether a short-term loan will be renewed, the borrower can have a term loan structured in such a way that the maturity coincides with the economic life of the asset being financed. Thus, the cash flows generated by the asset can service the loan without putting any additional financial strain on the borrower.

Term loans also offer potential cost advantages over long-term sources of financing. Because term loans are privately negotiated between the borrowing firm and the lending institution, they are less expensive than public offerings of common stock or bonds. The issuing firm in a public offering must pay the registration and issue expenses necessary to sell the securities. For small- to moderate -size offerings, these expenses can be large in relation to the funds raised. 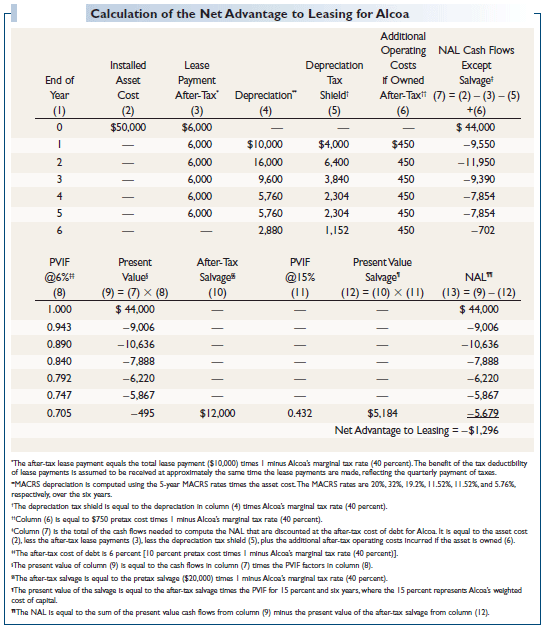 A term loan agreement usually requires that the principal be amortized over the life of the loan, which means that the firm is required to pay off the loan in installments, rather than in one lump sum. Amortizing has the effect of reducing the risk to the lender that the borrower will be unable to retire the loan in one lump sum when it comes due.Amortization of principal is also consistent with the idea that term loans are not a permanent part of a firm’s capital structure.

The amortization schedule of a term loan might require the firm to make equal quarterly, semiannual, or annual payments of principal and interest. For example, assume that Arrow Envelope Company borrows $250,000 payable over five years, with an interest rate of 10 percent per annum on the unpaid balance. The repayment schedule calls for five equal annual payments, the first occurring at the end of year 1.

Recall from Chapter that the annual payment (PMT) required to pay off a loan can be computed using Equation:

By making five annual payments of $65,949.37 to the lender, Arrow will just pay off the loan and provide the lender with a 10 percent return. Panel of Table shows the amortization schedule for this term loan.

Over the life of this loan,Arrow will make total payments of $329,746.85. Of this amount, $250,000 is the repayment of the principal, and the other $79,746.85 is interest. It is important to know what proportions of a loan payment are principal and interest because interest payments are tax deductible.

In this example, the repayment schedule calls for equal periodic payments to the lender consisting of both principal and interest. Other types of repayment schedules are also possible, including the following: 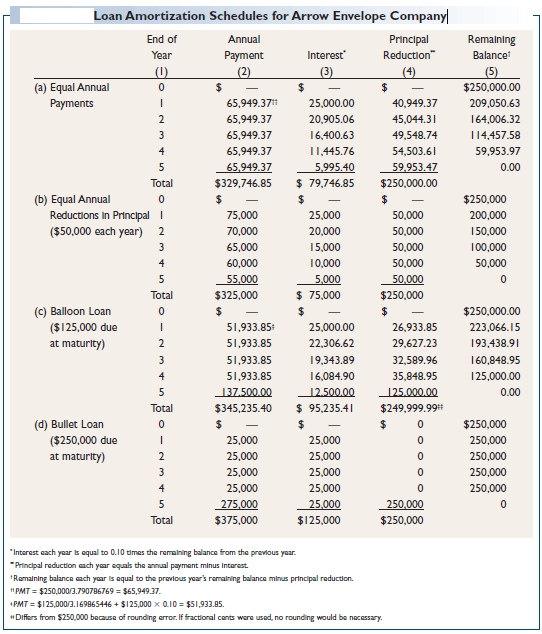 Also, large term loans tend to have lower rates than small term loans because the fixed costs associated with granting and administering a loan do not vary proportionately with the size of the loan. In addition, large borrowers often have better credit standings than small borrowers. An interest rate between 0.25 and 2.5 percentage points above the prime rate is common for term loans obtained from banks.

Compensating Balances It is not uncommon for a bank to require a borrowing firm to keep a percentage of its loan balance —for example, 10 percent—on deposit as a compensating balance. If this balance is greater than the amount the firm would normally keep on deposit with the bank, this requirement effectively increases the firm’s cost of the loan.

Equity Participations The interest rate charged on a term loan may also be influenced by a desire on the part of the lending institution to take an equity position (often called a “kicker”) in the company as an additional form of compensation. This is usually accomplished through the issuance of a warrant by the borrower to the lender.

A warrant is an option to purchase a stated number of shares of a company’s common stock at a specified price sometime in the future. If the company prospers, the lending institution shares in this prosperity on an equity basis. The issuance of warrants in conjunction with a term loan is common when the loan has an above -normal level of risk but the lending institution feels the borrower has promising growth potential. Alternatively, the borrower may issue warrants to secure a more favorable lending rate.