Not only does a firm have to be concerned about the level of current assets; it also has to determine the proportions of short- and long-term debt to use in financing these assets. This decision also involves trade-offs between profitability and risk. Sources of debt financing are classified according to their maturities. Specifically, they can be categorized as being either short-term or long-term, with short -term sources having maturities of one year or less and long-term sources having maturities of greater than one year.

Cost of Short-Term Versus Long-Term Debt

Risk of Long-Term Versus Short-Term Debt

Borrowing companies have different attitudes toward the relative risk of long-term versus short-term debt than do lenders. Whereas lenders normally feel that risk increases with maturity, borrowers feel that there is more risk associated with short-term debt. The reasons for this are twofold.

First, there is always the chance that a firm will not be able to refinance its short-term debt.When a firm’s debt matures, it either pays off the debt as part of a debt reduction program or arranges new financing. At the time of maturity, however, the firm could be faced with financial problems resulting from such events as strikes, natural disasters, or recessions that cause sales and cash inflows to decline. Under these circumstances the firm may find it very difficult or even impossible to obtain the needed funds. This could lead to operating and financial difficulties. The more frequently a firm must refinance debt, the greater is the risk of its not being able to obtain the necessary financing.

A company’s need for financing is equal to the sum of its fixed and current assets. Current assets can be divided into the following two categories:

Fluctuating current assets are those affected by the seasonal or cyclical nature of company sales. For example, a firm must make larger investments in inventories and receivables during peak selling periods than during other periods of the year. Permanent current assets are those held to meet the company’s minimum long-term needs (for example, “safety stocks” of cash and inventories). illustrates a typical firm’s financing needs over time. The fixed assets and permanent current assets lines are upward sloping, indicating that the investment in these assets and, by extension, financing needs tend to increase over time for a firm whose sales are increasing.

One way in which a firm can meet its financing needs is by using a matching approach in which the maturity structure of the firm’s liabilities is made to correspond exactly to the life of its assets, as illustrated in. Fixed and permanent current assets are financed with long-term debt and equity funds, whereas fluctuating current assets are financed with short-term debt.Application of this approach is not as simple as it appears, however. In practice, the uncertainty associated with the lives of individual assets makes the matching approach difficult to implement.

illustrate two other financing plans. shows a conservative approach, which uses a relatively high proportion of long-term debt. The relatively low proportion of short-term debt in this approach reduces the risk that the company will be unable to refund its debt, and it also reduces the risk associated with interest rate fluctuations. At the same time, however, this approach cuts down on the expected returns available to stockholders because the cost of long-term debt is generally greater than the cost of short-term debt.

illustrates an aggressive approach, which uses a relatively high proportion of short-term debt. A firm that uses this particular approach must refinance debt more frequently, and this increases the risk that it will be unable to obtain new financing as needed.

In addition, the greater possible fluctuations in interest expenses associated with this financing plan also add to the firm’s risk. These higher risks are offset by the higher expected after tax earnings that result from the normally lower costs of short-term debt. 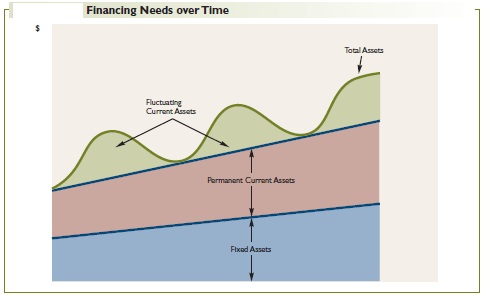 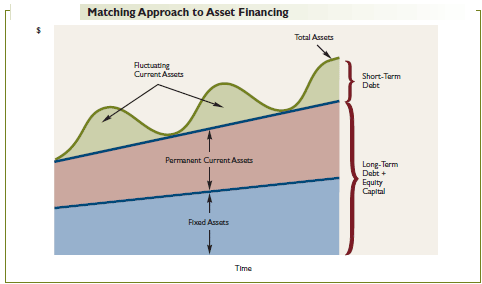 Consider again Burlington Resources, which has total assets of $70 million and common shareholders’ equity of $28 million on its books, thus requiring $42 million in shortor long-term debt financing. Forecasted sales for next year are $100 million and expected EBIT is $10 million. Interest rates on the company’s short-term and long-term debt are 8 and 10 percent, respectively, due to an upward-sloping yield curve. 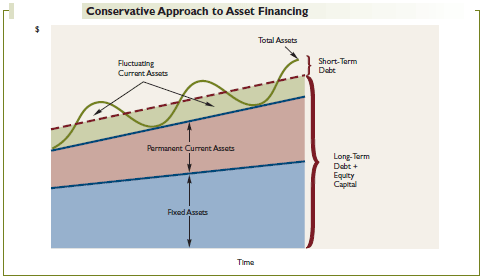 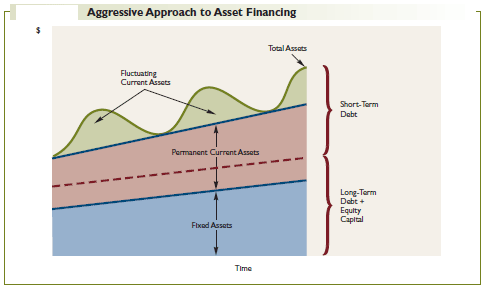 shows the data for each of these alternative proposed financing plans. From the standpoint of profitability, the aggressive financing plan would yield the highest expected rate of return to the stockholders—13.6 percent—whereas the conservative plan would yield the lowest rate of return—12.9 percent. In contrast, the aggressive plan would involve a greater degree of risk that the company will be unable to refund its debt because it assumes $30 million in short-term debt and the conservative plan assumes only $10 million in shortterm debt. This is substantiated further by the fact that the company’s net working capital position and current ratio would be lowest under the aggressive plan and highest under the conservative plan—making the degree of risk that the company will be unable to meet financial obligations greater with the aggressive plan. The moderate financing plan represents a middle-of-the-road approach, and the expected rate of return and risk level are between the aggressive and the conservative approaches. In summary, both expected profitability and risk increase as the proportion of short-term debt increases.

Profitability and Risk of Alternative Financing Policies for Burlington 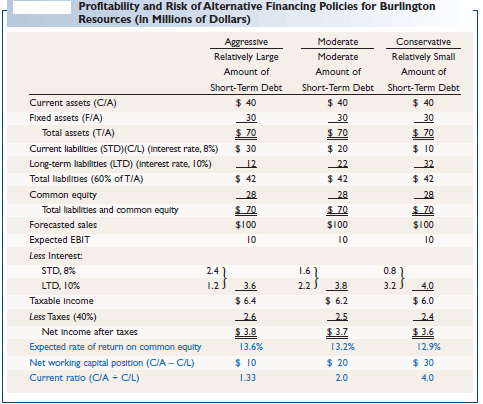 As is the case with working capital investment policy, no one combination of short- and longterm debt is necessarily optimal for all firms. In choosing a financing policy that maximizes shareholder wealth, a firm’s financial manager must also take into account various other factors, such as the variability of sales and cash flows, that affect the valuation of the firm.