In Previous Chapter , the return from holding an investment was defined in Equation as:

Distributions include interest on debt, dividends on common stock, rent on real property, and so on. Recall in Previous Chapter that risk was defined as the possibility that actual future returns will deviate from expected returns. In other words, it represents the variability of returns. From the perspective of security analysis or the analysis of an investment in some project (such as the development of a new product line), risk is the possibility that actual cash flows (returns) will be different from forecasted cash flows (returns).

In contrast, R.J. Reynolds Tobacco Company (RJR) bonds constitute a risky investment because it is possible that the company will default on one or more interest payments and will lack sufficient funds to redeem the bonds at face value at maturity. In other words, the possible returns from this investment are variable, and each potential outcome can be assigned a probability.

Probability of Default on RJR Bonds

The probability that a particular outcome will occur is defined as the percentage chance (or likelihood) of its occurrence. A probability distribution indicates the percentage chance of occurrence of each of the possible outcomes. Probabilities may be determined either objectively or subjectively. An objective determination is based on past occurrences of similar outcomes, whereas a subjective one is merely an opinion made by an individual about the likelihood that a given outcome will occur. In the case of projects that are frequently repeated— such as the drilling of developmental oil wells in an established oil field—reasonably good objective estimates can be made about the success of a new project. Similarly, good objective estimates can often be made about the expected returns of an RJR bond.

However, the expected returns from securities of new, small firms are often much more difficult to estimate objectively. Hence, highly subjective estimates regarding the likelihood of various returns are necessary. The fact that many probability estimates in business are at least partially subjective does not diminish their usefulness.

Before examining specific measures of risk and return, it is useful to summarize the basic elements of notation used throughout the chapter.

rp = rate of return on a portfolio of securities

rm = rate of return on the Market Portfolio; a broad-based security market index, such as the Standard & Poor’s 500 Market Index or the New York Stock Exchange Index, is normally used as a measure of total market returns

p = probability of occurrence of a specific rate of return

s = standard deviation of the rate of return on a security (or portfolio of securities); the square root of the variance of returns

r = correlation coefficient between the returns on two securities

kj = required rate of return on a given security

uj = risk premium required by investors on a given security

bp = measure of risk of a portfolio of securities

Probability Distribution of Returns from Duke and TI

where s is the standard deviation.

Expected Return Calculation for Investment in Duke and TI

Computation of Standard Deviations of Return for Duke and TI 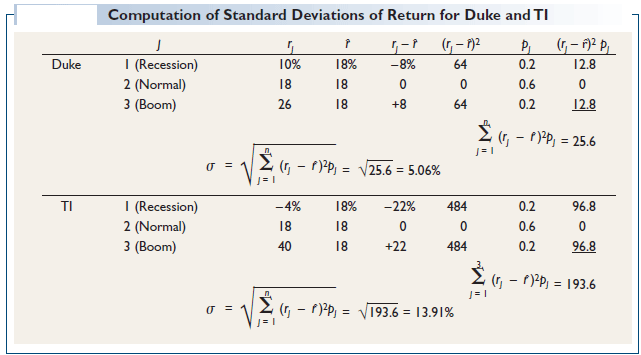 Continuous Probability Distributions for the Expected Returns from 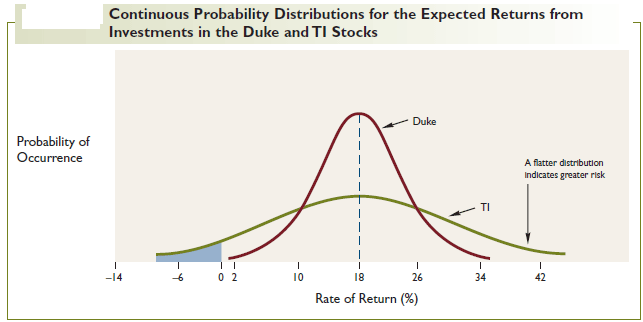 Areas Under the Normal Probability Distribution

Equation , along with Table V, can be used to compute the probability of a return from an investment being less than (or greater than) some particular value. For example, as part of the analysis of the risk of an investment in TI stock, suppose we are interested in determining the probability of earning a negative rate of return, that is, a return less than 0 percent. This probability is represented graphically in Figure as the area to the left of 0 (that is, the shaded area) under the TI probability distribution. The number of standard deviations that 0 percent is from the expected return (18 percent) must be calculated. Substituting the expected return and the standard deviation from Tables into Equation yields the following:

Coefficient of Variation: A Relative Measure of Risk

Asset T’s returns have a lower coefficient of variation than Asset S’s; therefore Asset T is the less risky of the two investments.

Risk as an Increasing Function of Time

Most investment decisions require that returns be forecasted several years into the future. The riskiness of these forecasted returns may be thought of as an increasing function of time. Returns that are generated early can generally be predicted with more certainty than those that are anticipated farther out into the future.

Consider the risk facing the Radio Shack in its decision to market a new line of stereo speakers through its retail stores. This project is expected to generate cash flows to Radio Shack of $2 million per year over the 7-year life of the project. Even though the expected annual cash flows are equal for each year, it is reasonable to assume that the riskiness of these flows increases over time as more and more presently unknown variables have a chance to affect the project’s cash flows. Figure illustrates this situation. The distribution is relatively tight in year 1, because the factors affecting that year’s cash flows (e.g., demand and costs) are reasonably well known.

By year 7, however, the distribution has become relatively flat, indicating a considerable increase in the standard deviation, which is caused by increased uncertainty about the factors that affect cash flows. For example, competitors may introduce similar (or improved) products, which would cause demand to decline for the Radio Shack speakers. 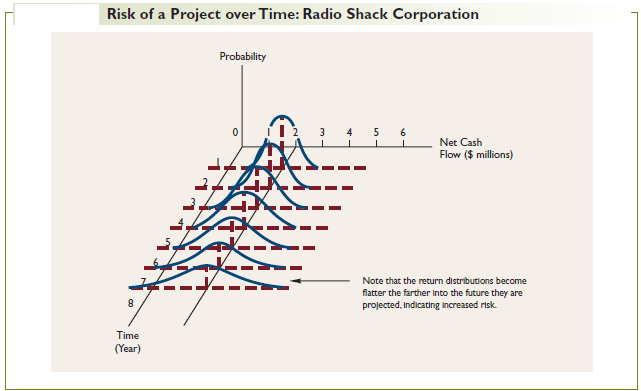 Some types of cash flows are not subject to increasing variability. These include, for example, contractual arrangements, such as lease payments, in which the expected cash flows remain constant (or change at some predefined rate) over the life of the contract. In spite of the exceptions, it is reasonable to conclude that the riskiness of the cash flows from most investment projects gradually increases over time. Similarly, the riskiness of returns from most securities increases the farther into the future these returns are being considered. For instance, the interest return from the purchase of General Motors Corporation (GM) bonds is nearly guaranteed for the next year.However, projecting the interest returns to be received 10 years in the future is much more difficult due to the potential impact of competition, new technology, and other factors that might cause GM to have to default on its interest payment on its bonds.