If the managers of a firm accept the goal of maximizing shareholder wealth, how should they achieve this objective? One might be tempted to argue that managers will maximize shareholder wealth if they maximize the profits of the firm. After all, profit maximization is the predominant objective that emerges from static microeconomic models of the firm. Unfortunately, the profit maximization objective has too many shortcomings to provide consistent guidance to the practicing manager.

Before discussing some of these shortcomings, it is useful to highlight one important managerial decision rule that emerges from the microeconomic profit maximization model. In order to maximize profits, we learned in microeconomics that a firm should expand output to the point where the marginal (additional) cost (MC) of the last unit produced and sold just equals the marginal revenue (MR) received. To move beyond that output level will result in greater additional costs than additional revenues and hence lower profits.

To fail to produce up to the point where MC = MR results in a lower level of total profits than is possible by following the rule. This fundamental rule, that an economic action should be continued up to the point where the marginal revenue (benefit) just equals the marginal cost, offers excellent guidance for financial managers dealing with a wide range of problems.

For example, we shall see that the basic capital expenditure analysis model is simply an adaptation of the MC = MR rule. Other applications appear in the working capital management and capital structure areas. Despite the insights it offers financial managers, the profit maximization model is not useful as the central decision-making model for the firm for several reasons. First, the standard micro-economic model of profit maximization is static; that is, it lacks a time dimension. Profit maximization as a goal offers no explicit basis for comparing long-term and short-term profits. Major decisions made by financial managers must reflect the time dimension.

For example, capital expenditure decisions, which are central to the finance function, have a longterm impact on the performance of the firm. Financial managers must make trade -offs between short -run and long -run returns in conjunction with capital investment decisions. The second limitation of the profit maximization objective has to do with the definition of profit. Generally accepted accounting principles (as discussed in Chapter) result in literally hundreds of definitions of profit for a firm because of the latitude permitted in recognizing and accounting for costs and revenues. For example, in 1990, Carolina Power & Light Company (CPL) was forced to reduce its earnings by $81.6 million because of an unfavorable regulatory treatment of its Harris nuclear plant.

Overview of Finance and Raising Money

Even if we could agree on the appropriate accounting definition of profit, it is not clear whether a firm should attempt to maximize total profit, the rate of profit, or earnings per share (EPS).

Although total profit has increased, earnings per share have declined. Stockholders are not better off as a result of this action. This example might lead one to conclude that managers should seek to maximize earnings per share (for a given number of shares outstanding). This, too, can result in misleading actions. For example, consider a firm with total assets at the start of the year of $10 million. The firm is financed entirely with stock (1 million shares outstanding) and has no debt. After -tax earnings are $1 million, resulting in a return on stockholders’ equity of 10 percent ($1 million in earnings divided by $10 million in stockholders’ equity), and earnings per share are $1.

The company decides to retain one -half of this year’s earnings (increasing assets and equity to $10.5 million) and pay out the balance in stockholders’ dividends. Next year the company’s earnings total $1.029 million, resulting in earnings per share of $1.029. Are shareholders better off because of the decision by managers to reinvest $500, 000 in the firm? In this example, a strong argument can be made that the position of shareholders has deteriorated. Although earnings per share have increased from $1 per share to $1.029 per share, the realized return on stockholders’ equity has actually declined, from 10 percent to 9.8 percent ($1.029 million divided by $10.5 million of stockholders’ equity).

In essence, the company’s managers have reinvested $500, 000 of stockholders’ money to earn a return of only 5.8 percent ($0.029 million of additional earnings divided by $0.5 million of additional investment). This type of investment is not likely to result in maximum shareholder wealth. Shareholders could do better by investing in risk-free government bonds yielding more than 5.8 percent.

The third major problem associated with the profit maximization objective is that it provides no direct way for financial managers to consider the risk associated with alternative decisions. For example, two projects generating identical future expected cash flows and requiring identical outlays may be vastly different with respect to the risk of the expected cash flows. Similarly, a firm can often increase its earnings per share by increasing the proportion of debt financing used in the firm’s capital structure. However, leverage induced increases in EPS come at the cost of increased financial risk. The financial marketplace will recognize the increased risk of financial distress that accompanies increases in debt financing and will value the resulting EPS accordingly.

If the profit maximization objective does not provide the proper guidance to managers seeking to maximize shareholder wealth, what rules should these managers follow? First, it is important to recognize that the maximization of shareholder wealth is a market concept, not an accounting concept. Managers should attempt to maximize the market value of the company’s shares, not the accounting or book value per share. The book value reflects the historic cost of assets, not the earning capacity of those assets. Also, the book value does not consider the risk associated with the assets.

Three major factors determine the market value of a company’s shares of stock: the amount of the cash flows expected to be generated for the benefit of stockholders; the timing of these cash flows; and the risk of the cash flows.

Throughout the book, we stress the importance of cash flows in the practice of financial management. Cash flow relates to the actual cash generated or paid by the firm. Only cash can be used to acquire assets, and only cash can be used to make valuable distributions to investors. In contrast, the accounting system focuses primarily on a matching over time of the historic, cost-based revenues and expenses of a company, resulting in a bottom -line earnings figure. But accounting earnings are often misleading because they do not reflect the actual cash inflows and outflows of the firm. For example, an accountant records depreciation expense on an asset each period over the depreciable life of that asset.

Depreciation is designed to reflect the decline in value of that asset over time. However, depreciation itself results in no cash outflow.17 The entire cash outflow occurred when the asset was originally purchased.

Timing of Cash Flows The market value of a share of stock is influenced not only by the amount of the cash flows it is expected to produce but also by the timing of those cash flows. If faced with the alternatives of receiving $100 today or $100 three years from today, you would surely choose the $100 today because you could invest that $100 for three years and accumulate the interest. Thus, financial managers must consider both the magnitude of the cash flows they expect to generate and the timing of these cash flows because investors will reflect these dimensions of return in their valuation of the enterprise.

Finally, the market value of a share of stock is influenced by the perceived risk of the cash flows it is expected to generate. the greater the perceived risk associated with an expected cash flow, the greater is the rate of return required by investors and managers. Thus, financial managers must also consider the risk of the cash flows expected to be generated by the firm because investors will reflect this risk in their valuation of the enterprise.

How can managers influence the magnitude, timing, and risk of the cash flows expected to be generated by the firm in order to maximize shareholder wealth? Many factors ultimately influence the magnitude, timing, and risk of a firm’s cash flows and thus the price of the firm’s stock. Some of these factors are related to the external economic environment and are largely outside the direct control of managers. Other factors can be directly manipulated by the managers.

By making policy decisions using such a competitive framework, managers can be in a position to create value for shareholders. Accordingly, the focus of this book is on making financial decisions that can improve the amount, timing, or risk profile of a firm’s cash flow stream, thus leading to increases in shareholder wealth and value. Financial managers are not only responsible for measuring value, but also for creating value.

The next section defines the cash flow concept and establishes why cash flows are the relevant source of value in finance. 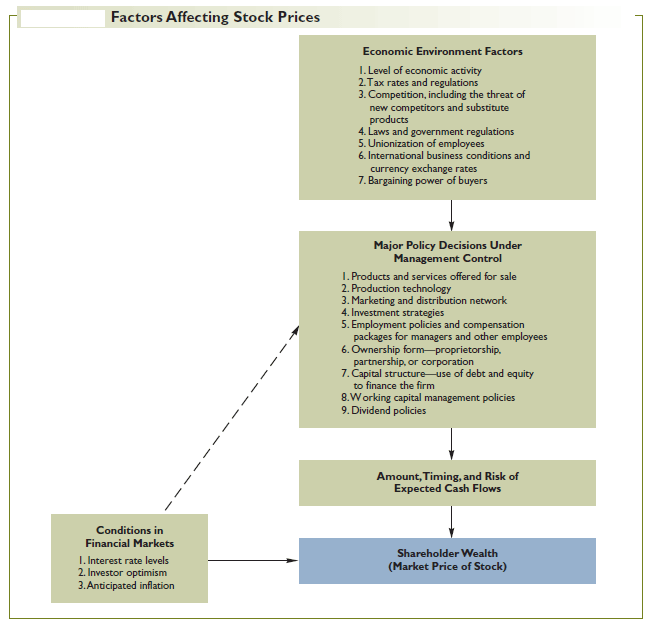