As already discussed, traditional financial analysis focuses on a set of financial ratios derived primarily from accounting information. Using an approach such as DuPont analysis, a firm’s financial performance can be dissected into its component elements. The ultimate measure of firm performance is the return on common equity. Although insights can be gained from this type of analysis, traditional financial analysis suffers from weaknesses inherent in reported accounting information, and it does not directly consider risk in the measure of performance.

The greatest shortcoming of traditional financial analysis is the lack of a direct tie between performance, as measured using financial ratios, and shareholder wealth, as measured by the market price of a firm’s stock.

A number of alternative performance measures include the Fortune 500 and the Business Week 1000 measures. The Fortune 500 measure is a ranking of the top 500 industrial companies based on annual sales. These rankings have almost no relationship to either accounting financial performance or shareholder wealth.

Consequently the Fortune rankings are suitable only for identifying the largest firms in terms of sales. In contrast, the Business Week 1000 rankings are based on the aggregate market value of the outstanding common stock of each of the 1,000 firms considered. This measure looks at the equity component of capital but ignores capital raised from other sources. Furthermore, it includes a bias in favor of large firms when performance is measured by aggregate market value.

The Stern Stewart Performance 1000 is based on the concept of Market Value Added (MVA). MVA is defined as the market value of debt, preferred equity, and common equity capitalization, less capital. Capital is a measure of all the cash raised from investors or retained from earnings to fund new investments in the business, since the company’s inception.

MVA is the capital market’s assessment of the accumulated net present value (NPV) of all of the firm’s past and projected investment projects. Table on page 94 shows the MVA for some of the highest and lowest performing U.S. companies. For example, in the 2002 rankings, AT&T had a negative MVA of $72.7 billion, meaning that AT&T had destroyed $72.7 billion of shareholder value by investing in a large number of negative net present value projects. Compare the performance of AT&T and General Electric. These two firms have differed dramatically in their performance rankings. General Electric had created an astounding $222.8 billion of shareholder value.

It is a measure of operating performance that indicates how successful a firm has been at increasing the MVA of the enterprise in any given year. EVA is defined as:

where r = net operating profits after tax divided by beginning of year capital, and k = weighted after -tax cost of capital. Using this relationship, it can be seen that a firm’s managers can increase EVA by (1) increasing operating efficiency and thereby increasing r ; (2) committing new resources to the enterprise that promise a return in excess of the firm’s weighted (and risk-adjusted) cost of capital; (3) redirecting resources from projects that do not earn adequate returns (relative to the cost of capital) and show little promise of doing so in the future, to more productive uses, including the payment of dividends and reduction of debt levels if no adequate-return projects are present; and (4) making prudent use of the tax benefits of debt financing to create value, while considering risk versus return trade-offs. 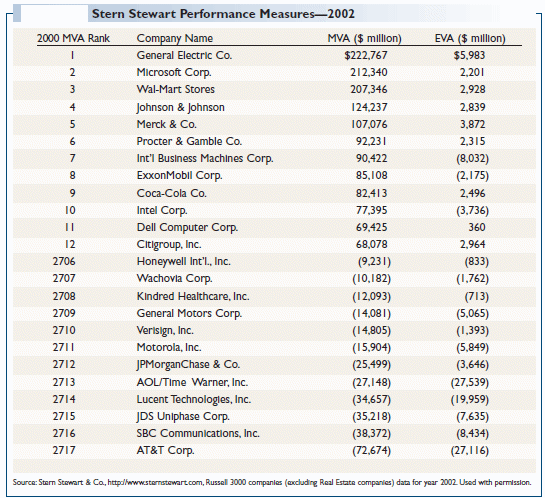 EVA can be thought of as the incremental contribution of a firm’s operations to the creation of MVA. MVA is the present value of all expected future EVA. Firms that consistently earn returns in excess of their cost of capital will have positive EVA, thereby enhancing the MVA of the enterprise. For example, in 2002 Wal-Mart’s EVA was $2.9 billion, indicating that Wal-Mart was adding to shareholder wealth during that year.

In contrast, firms that earn less than their cost of capital will have negative EVA. Consistent expected negative EVA will result in a decline in a firm’s MVA. For example, in 2002 AOL/Time Warner had EVA of negative $27.5 billion.

One important implication of the MVA and EVA concepts is that growth in earnings does not necessarily add to the value of an enterprise (MVA) unless it is achieved by making (and managing) investments such that they earn a return in excess of the cost of capital (positive EVA). Another implication is that increasing the rate of return on investment will not necessarily increase MVA because it is necessary to link the return earned with the market-required rate of return (weighted cost of capital).

Finally, a company’s dividend policy has no direct impact on MVA since the payment of dividends equally reduces both the book and the market value of capital. Only if dividend payments provide credible signals to the capital markets about future prospects (for EVA) will dividend payment patterns have an impact on value.

The EVA and MVA concepts used in the construction of the Stern Stewart Performance 1000 index provide a useful alternative way to focus on the performance of an enterprise in the context of the objective of maximizing the value of the enterprise. This way of looking at financial analysis is appealing because it explicitly ties together the investment decisions with measures of firm performance. As such, financial managers and analysts may find this approach to firm performance analysis a useful complement to more traditional approaches.

The tools of financial analysis developed in this chapter are useful in evaluating the financial performance of purely domestic U.S. firms as well as firms with small international operations.However, assessing the financial performance and condition of a firm with sizable international operations is generally more complicated than analyzing a firm whose operations are largely domestic. Part of the complication involves the translation of foreign operating results from the host country’s currency to U.S. dollars.

But if the exchange rate changes to 1.5 euros/dollar, the dollar value of 200 million euros drops to $133.33 million. Thus the earnings reported by a U.S.-based company with sizable foreign operations depend not only on the local currency earnings but also on the exchange rate between the dollar and the local currency. When the U.S. dollar is relatively strong against a foreign currency— that is, when the dollar will buy more euros, for example —foreign earnings translate into fewer dollars than when the dollar is relatively weak.

An additional complication in financial analysis of multinational firms arises because of fluctuating exchange rates. What happens to the dollar value on the parent (Sara Lee) balance sheet of Sara Lee’s European assets and liabilities as the exchange rate between euros and dollars changes? According to Statement of Accounting Standards No. 52, which deals with international accounting, assets and liabilities are normally translated at the exchange rate in effect on the balance sheet date.

Financial managers and analysts will have to be knowledgeable about the complex international aspects of financial statement analysis. 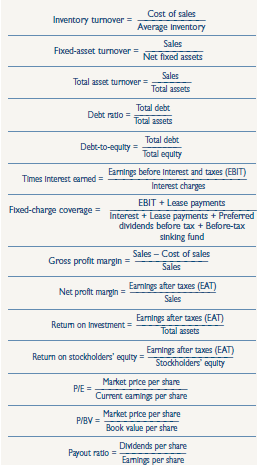 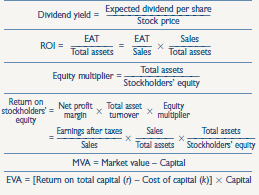