A hedge is a transaction that limits the risk associated with fluctuations in the price of a commodity, currency, or financial instrument. A hedge is accomplished by taking offsetting positions in the ownership of an asset or security through the use of derivative securities, such as buying or selling a forward contract, a futures contract, or an option to offset risk exposure in the cash market.

A forward contract is an agreement to buy or sell an asset at some point in time in the future at a specified price agreed to at the time the contract is purchased or sold. The specified price is called the delivery price, and it remains fixed during the term of the contract. The party that agrees to buy the asset in the future is said to have taken a long position, whereas the party that agrees to sell the asset has a short position. The spot price is the current price of the asset. A rise (fall) in the spot price generates a profit (loss) for the holder of the long position and a loss (profit) for the holder of the short position. In a typical forward contract, cash flows are exchanged between the buyer and the seller only on the maturity date of the contract. Because forward contracts can be executed for any quantity of an asset and for any maturity date, they are generally not liquid, that is, there is no organized market for the purchase and sale of forward contracts.

Also, because no cash flows exchange hands until maturity, forward contracts are said to possess performance risk. Performance risk is the risk that at maturity the party that has losses from the contract may fail to make the necessary payments to the party with the gains from price movements in the contract. Forward contracts are most common in the foreign currency markets. Figure shows foreign currency exchange rates for a number of countries. This table shows forward rates of exchange between the dollar and several key currencies including the Canadian dollar, the Japanese yen, the Swiss franc, and the U.K. pound. These exchange rates apply to trading between large banks for amounts of $1,000,000 or more. Because of the financial strength and trust between major banks, there is virtually no performance risk when these contracts are executed. 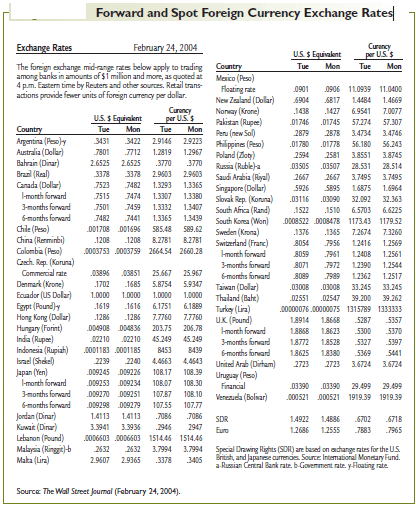 Futures contracts require daily settlement between the buyer and seller for gains and losses. For example, assume that Cone Mills buys a futures contract for the delivery of 50,000 pounds of cotton, three months hence, at a price of 70 cents per pound. As the buyer of the contract, if the price of cotton rises to 71 cents per pound the day after the contract has been purchased, Cone Mills has a profit of 1 cent per pound, or $500. The seller of the contract, Texas Cotton Cooperative, has an identical loss. Under the rules of the New York Cotton Exchange (NYCE), the exchange where cotton futures are traded, the losers must pay the winners each day. This is called marking to market. Performance on a contract is guaranteed both by the requirement to mark to market and by the requirement that both parties maintain a margin account, or performance bond with their broker.

The funds placed in the margin account are used to assure that losers have sufficient resources to pay the winners each day. If the amount in the margin account slips below the minimum required, the broker will demand that more funds be added to the account. If that is not done immediately, the broker will liquidate the position of the account holder. A “clearinghouse”operated by the exchange handles all payments between buyers and sellers over the life of the contract. In essence, all contracts are purchased from the clearinghouse or sold by the clearinghouse. The combination of the clearinghouse and margin accounts assures performance under the terms of all futures contracts.

When a futures contract matures, the buyer of the contract has the option of either taking delivery of the commodity underlying the contract or reversing its position by making an offsetting transaction. Only rarely do contract buyers (long position) take delivery. It is much more common for them to reverse their positions just prior to expiration buy selling an identical contract.

Because the buyer has purchased a contract (the original transaction) and sold an identical contract (normally just prior to expiration), the clearinghouse recognizes these transactions as offsetting each other. The opposite is true of the seller (short position) of the contract. The seller will have to purchase a contract to offset their short position.

is a table of metal futures prices traded on the COMEX (CMX), a division of the New York Mercantile Exchange, as of February 24, 2004. As can be seen, copper contracts are for 25,000 pounds of copper and the prices are quoted in cents per pound. The column headed as “SETTLE” is the closing price of the contract for that day. The column headed as “OPEN INT” indicates the number of contracts that have been bought and sold and remain outstanding.

Suppose that on February 24, 2004,Halstead Industries anticipates the need for 100,000 pounds of copper in late June 2004 to meet its obligations under a contract to deliver copper tubing to an appliance manufacturer. Halstead has a number of choices. First, it could simply wait until June and buy the copper it needs. This choice, however, poses a risk that copper prices will rise, reducing the profitability of the contract with the appliance manufacturer.

A second alternative is to buy today the copper it needs to fulfill the contract and store it until it is needed in June. The disadvantage of this alternative is the fact that Halstead will have a considerable amount of money tied up in this raw materials inventory, plus Halstead would have to pay to store the copper.

Alternatively, Halstead could execute what is called a long hedge; that is, Halstead could buy four copper futures contracts for June delivery at the June futures price, as of February 24, 2004. Assume that the purchase occurred at the closing price of the June contract of 132.2 cents per pound. The futures price represents a market-determined expectation of what the price of copper will be in late June. As time passes leading up to June, assume that the price of copper has risen to 150 cents per pound, because of a worldwide economic recovery and developing shortages of copper. If Halstead had remained unhedged, it would have had a loss of 17.8 cents per pound (150 cents minus 132.2 cents), or $17,800. By purchasing the copper futures contracts, this loss in the cash market is offset by profits in the futures market. This is illustrated in

Another type of hedge transaction is called a short hedge. Consider the case of the Battle Mountain Copper Company. Battle Mountain has agreed on February 24, 2004, to sell 50,000 pounds of copper that it has not yet produced to Ford Motor Company for delivery in late May 2004 at an expected price of 132.85 cents per pound, the price of May copper futures contracts. Battle Mountain knows that this will be a profitable transaction because its cost of production is less than the expected sales price. However, it is possible that between February and May, the spot price of copper may decline, such that Battle 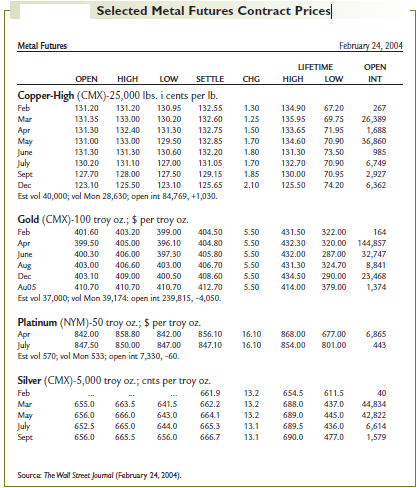 Mountain would be forced to sell the copper at a loss. To protect against this possibility, Battle Mountain could use the copper futures market to set up a short hedge. A short hedge in copper is illustrated in Table. As this example illustrates, the short hedge has protected Battle Mountain from the unanticipated price decline for copper between February and May. Although both of these examples illustrate perfect hedges, in real-world hedging situations it is extremely difficult to perfectly hedge the risks illustrated here. Hedging is difficult to do perfectly because: (1) the available futures contract sizes may not match the hedging needs of the firm; and (2) there may be a change in the relationship between the futures price and the local spot price, so-called basis risk. Nevertheless, it is often possible to set up effective hedges of price risk using these hedging strategies.

A Long Hedge in Copper