Whenever a U.S. firm purchases goods or services from a firm in another country, two currencies normally are involved. For example,when a U.S. company purchases materials from a British supplier, the British firm usually prefers payment in British pounds, whereas the U.S. company prefers to make payment in U.S. dollars. If the sales agreement requires that payment be made in pounds, the U.S. company will have to exchange (that is, sell) dollars to obtain the required number of pounds. The exact amount of dollars the U.S. company will have to sell depends on the exchange rate between the two currencies.

Suppose, for example, that the exchange rate at the time of the transaction is $1.48 per pound, £. Furthermore, assume that the British supplier and the U.S. firm have agreed on a price of £2 million for the materials. Therefore, the U.S. firm will have to exchange $2.96 million (that is, £2,000,000 x $1.48/pound) to obtain the British currency to pay for the purchase.

As an illustration, consider the following example. BMW sells a car to an American dealer for $60,000. The American dealer pays BMW with a check for $60,000 drawn on JPMorganChase. BMW must then decide what to do with this check. BMW could immediately sell the dollars (buy euros). However, BMW wants to retain the dollars for use later on (perhaps to pay for goods purchased from U.S. firms), so it buys a Eurodollar deposit by depositing the check in Deutsche Bank in Germany. The typical Eurocurrency deposit is a nonnegotiable time deposit with a fixed term to maturity. Maturities range from overnight to as long as five years.

The Eurocurrency market provides an important alternative to domestic sources of funds for multinational firms. For example, in the United States, large, well -established multinational corporations can borrow funds either in the domestic financial market or in the international financial marketplace, such as the Eurocurrency market. If General Motors chooses to borrow in the Eurodollar market, it would receive a Eurodollar loan from a foreign bank, such as Barclays Bank in London or Deutsche Bank in Frankfurt. The interest rate in the Eurodollar market is usually related to the London InterBank Offer Rate, or LIBOR.

The Euro: A Common European Currency

On January 4, 1999, 11 countries of the European Union (EU) turned over control of their monetary policies to a new European Central Bank, and the single European currency, the euro, was born. During a transition period, the euro was being used only for paperless transactions. But on January 1, 2002, euro bills and coins began circulation and six months later, the national currencies of these 11 countries ceased to exist.

This move toward a single European currency is the logical outgrowth of the development of a single European market, where goods, services, and people flow freely across national borders. The use of a common currency eliminates exchange costs associated with converting from one currency to another and also eliminates the uncertainty of exchange rate fluctuations among these countries. The euro initially traded in the foreign currency marketplace at a rate of about $1.17 per euro.

By late 2001, however, the value of the euro declined to about $0.88 because of a number of factors, including the relative strength of the U.S. and European economies. In early 2004, the Euro rose in value to approximately $1.27. Regardless of its short-term performance, the euro is sure to become a major international currency, rivaling the dollar in importance.

Exchange rates between U.S. dollars and the currencies of most countries are reported daily in The Wall Street Journal. We lists the (direct quote) exchange rates between U.S. dollars and various currencies as of November 15, 2001 and February 20, 2004. These quotes are for trades made among banks in amounts of $1 million or more. Smaller, retail transactions usually result in fewer units of a foreign currency per dollar. The quotes We shown are known as spot rates. Spot rates represent the rate of exchange for currencies being bought and sold for immediate delivery.

Banks profit from their foreign currency transactions by buying currencies at one rate (bid) and selling them at another, higher rate (ask or offer). For example, a bank may quote the euro at $0.8808 bid, and $0.8817 offer. This quote is often written simply as 0.8808 – 17.

In addition to spot transactions, currencies can also be bought and sold today for delivery at some future time, usually 30, 90, or 180 days from today. In these cases, forward rates are used, rather than spot rates. Forward exchange rates between U.S. dollars and the currencies of several of the major industrial countries are also reported daily in The Wall Street Journal. Table 2.3 lists some forward exchange rates as of February 20, 2004.

The premium or discount between the spot rate, S0, and a forward rate, F, for a currency (relative to the dollar, for example) can be expressed on an annualized percentage basis (using direct quotes) as follows:

where n is the number of months in the forward contract. A positive value calculated using Equation shown above indicates that a currency is trading at a forward premium relative to the dollar, whereas a negative value indicates a forward discount. Using the exchange rates from Tables, The following annualized premium for the 6-month forward quote on the Canadian dollar can be calculated: 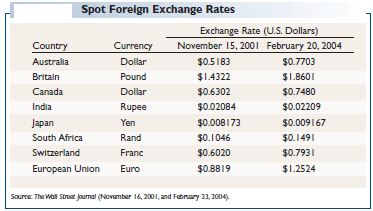 A foreign currency futures contract is similar to a forward contract. Both call for the delivery of a specified amount of some item, such as a foreign currency, at a future point in time at a price set at the present time. A forward contract is normally a contract between two individuals who are known to each other, such as an importer and a commercial bank. Performance on the contract by the seller and the buyer depends on the character and capacity of the two parties. Because these contracts are negotiated between two individuals, forward contracts can be established for any future time period and for any quantity of any item that is agreeable to the parties.

The most important foreign currency futures market in the United States is the Chicago Mercantile Exchange (CME). Contracts traded on the CME mature on the third Wednesday of the contract month,with the last trading day being two days prior to that.Unlike forward contracts, there is virtually no performance risk in a futures contract. Rather than the buyer and seller of the contract dealing directly with each other, the exchange clearing house acts as the buyer and seller of all contracts. Buyers and sellers of futures contracts must post collateral (as their performance bond). Each day the value of the contract is “marked to market,”with all gains and losses being paid between the parties in cash.

If payment is not made, the contract is sold by the clearinghouse and the performance bond of the defaulting party is charged for any losses. In essence, one can think of a futures contract as a series of forward contracts that are settled each day. Only about 5 percent of foreign currency futures contracts are settled by means of delivery of the underlying currency from the seller to the buyer.More commonly, the parties will offset their position prior to expiration by making a transaction opposite to the original one. For example, a buyer of a contract for 125,000 euros with delivery in March usually sells an identical contract prior to expiration. The sale of an identical contract by an initial buyer of the same contract fully offsets the position from the perspective of the clearinghouse.

The column numbers indicate that the opening price of the December 2001 contract was $0.8817/euro, the high price for the day was $0.8844, the low price for the day was $0.8796, and the closing price (settle) was $0.8805. This was a decrease of $0.0017 from the previous day. Over the lifetime of this contract, it traded from a high of $0.9632 to a low of $0.8337. Currently, there are 111,093 contracts (open interest) such as this one in existence. As the last trading date approaches, the open interest declines dramatically and only a small minority of the contracts will actually be in existence (and therefore require delivery of euros from the seller to the buyer) at expiration. Also, this table indicates much more trading interest in the near -term contract (December) than in the longer-term contract (June).

Finally, the last line in Table indicates that 14,814 contracts traded on November 15, compared with 31,261 contracts on the previous day. The number of contracts outstanding increased by 4,224 on November 15 to a total of 113,031.

Whereas forward and future currency contracts reflect an obligation to either buy or sell a currency at a future date, options are contracts that give the option buyer the right, but not the obligation, to either buy or sell a fixed amount of a foreign currency at a fixed price at a time up to, or at, the expiration date of the option. There are two fundamental types of options.