Consider the Yuma Corporation with a present capital structure consisting only of common stock (35 million shares). Assume that Yuma is considering an expansion and evaluating two alternative financing plans. Plan 1, equity financing, would involve the sale of an additional 15 million shares of common stock at $20 each. Plan 2, debt financing, would involve the sale of $300 million of 10 percent long-term debt.

If the firm adopts Plan 1, it remains totally equity financed. If, however, the firm adopts Plan 2, it becomes partially debt financed. Because Plan 2 involves the use of financial leverage, this financing issue is basically one of whether it is in the best interests of the firm’s existing stockholders to employ financial leverage. Table illustrates the calculation of EPS at two different assumed levels of EBIT for both financing plans. Because the relationship between EBIT and EPS is linear, the two points calculated in Table can be used to graph the relationship for each financing plan, as shown in figure.

where EBIT is earnings before interest and taxes; Id is the firm’s total interest payments if the debt alternative is chosen; Ie is the firm’s total interest payments if the equity alternative is chosen; and Nd and Ne represent the number of common shares outstanding for the debt and equity alternatives, respectively. The firm’s effective tax rate is indicated as T, and Dp is the amount of preferred dividends for the firm. This equation may be used to calculate directly the EBIT level at which earnings per share for the two alternatives are equal. The data from the example shown in Table yield the EBIT-EPS indifference point:

Except Per-Share Amounts Are in Millions of Dollars)* 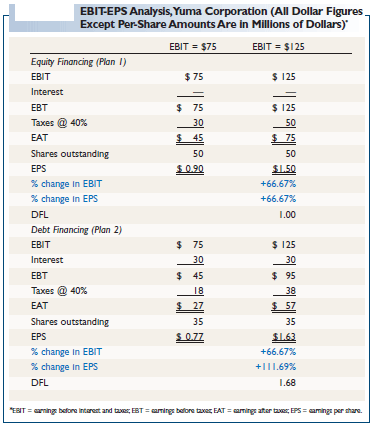 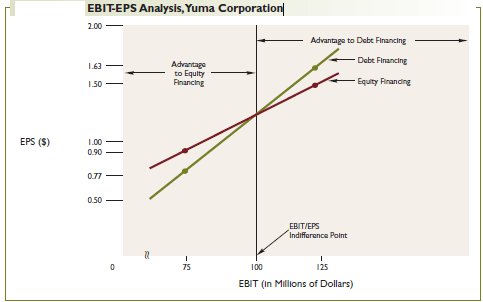 Balboa Department Stores has been 100 percent financed with equity funds since the firm was founded. While analyzing a major expansion program, the firm has decided to consider alternative capital structures. In particular, it has been suggested that the firm should use this expansion program as an opportunity to increase the long-term debt ratio from the current level of 0 percent to a new level of 30 percent. Interest on the proposed new debt will amount to $100,000 per year.

This step is undertaken only after a proposed capital structure has met the “internal” tests for acceptability. Financial leverage is a double -edged sword: It enhances expected returns, but it also increases risk. If the increase in perceived risk is greater than the increase in expected returns, the firm’s weighted cost of capital may rise instead of fall, and the firm’s stock price and market value will decline.

It is important to note that a firm need not feel constrained by industry standards in setting its own capital structure. If, for example, a firm has traditionally been more profitable than the average firm in the industry, or if a firm’s operating income is more stable than the operating income of the average firm, a higher level of financial leverage can probably be tolerated. The final choice of a capital structure involves a careful analysis of expected future returns and risks relative to other firms in the industry.

An important question arising from EBIT-EPS analysis is the impact of financial leverage on the firm’s common stock price. Specifically, which financing alternative results in the higher stock price? Returning to the Yuma Corporation example discussed earlier, suppose the company is able to operate at the $125 million EBIT level. Then, if the company chooses the debt financing alternative, its EPS will equal $1.63, and if it chooses the equity alternative, its EPS will be $1.50.

To carry the Yuma Corporation example one important step further, suppose the company, while operating at the $125 million EBIT level, chooses an even higher level of debt in its capital structure significantly increases the company’s financial risk—to the point where bankruptcy could occur if EBIT levels turned downward in a recession. If the stock market assigns a P/E ratio of 10.0, for example, the stock price would be $22.50 (= $2.25 _ 10.0), and it would be clear that this change in capital structure is not desirable.

It is important to emphasize that the P/E ratios in the preceding example are simply assumptions. As an analytical technique, EBIT-EPS analysis does not provide a complete solution to the optimal capital structure question.

In summary, the firm potentially can show increased earnings to its stockholders by increasing its level of financial risk. However, because increases in risk tend to increase the cost of capital (which is analogous to a decrease in the P/E ratio), the firm’s management has to assess the trade -off between the higher earnings per share for its stockholders and the higher costs of capital.