The optimal capital budget can be determined by comparing the expected project returns to the company’s marginal cost of capital schedule. This is accomplished by first plotting the returns expected from the proposed capital expenditure projects against the cumulative 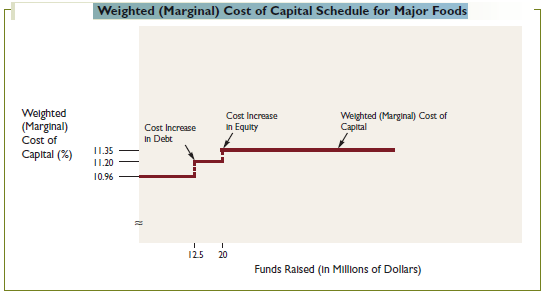 The Cost of Capital

Small firms have a difficult time attracting capital to support their investment programs. Owners of small firms are reluctant to sell common stock because they do not want to lose voting control in the company.When shares are sold, many small firms create two classes of stock, such as Class A and Class B.The Class A stock is the one that is traded most extensively in the capital markets. Class A stock usually receives a higher dividend than Class B. In contrast, Class B stock, often held by the company’s founders, has greater voting power than Class A stock.

In this way, capital can be raised without losing voting control. Many firms are so small that it is nearly impossible to raise funds by selling common stock. If stock can be sold, investors will often pay much less for these shares than they would for similar firms that are larger and have their stock traded regularly on an organized exchange or over the counter. Issuance costs for common stock sales of small firms may exceed 20 percent of the issue size.

As a consequence, the cost of equity capital tends to be significantly higher for small firms than it is for larger firms. Because of the limited access to the capital markets for new equity, small firms tend to retain a much larger portion of their earnings to fund future growth than larger firms.

Similarly, the sources of debt capital to small firms are also limited. Bonds and debentures cannot be sold publicly until a firm has grown to a relatively large size. Before reaching a size that will permit it to sell securities publicly, the small firm will have to rely upon the following sources for debt funds:

Conceptually, computing the cost of capital for a small, closely held firm is no different than for a large, publicly traded firm. The same models of valuation apply to small firms as to large firms. In practice, however, there are often serious difficulties in developing confident estimates of the cost of capital for small firms. Computing the cost of straight debt and preferred stock (nonconvertible and without attached warrants) is relatively easy.

However, when debt and preferred stock securities are convertible or have attached warrants, an analyst must make an estimate about the time and conditions under which these securities will be converted into common stock or when the warrants to purchase common stock will be exercised.

In the case of common stock, there is often no ready market for the stock. Hence, it may not be possible to make confident estimates of the stock price when computing the cost of equity. Also, because many small firms pay little or no dividends, applying the dividend valuation model is more difficult. As a consequence, when computing the cost of equity for small firms, analysts must often compute the cost of equity for a group of larger, publicly traded companies in the same line of business and with a similar financial risk (as measured by the capital structure) and then add an additional risk premium reflective of the perceived increased risk due to reduced marketability and liquidity of the small firm’s stock and any differential in business and financial risk.

funds required. The resulting graph is called an investment opportunity curve. Next, the previously calculated ka for the three capital “packages” are combined to determine the company’s marginal cost of capital curve. The optimal capital budget is indicated by the point at which the investment opportunity curve and the marginal cost of capital curve intersect, as shown in Figure

Specifically, the Major Foods Corporation’s optimal capital budget totals $23 million and includes Projects A, B, C, and D. Projects E and F are excluded, because their returns are expected to be below the 11.35 percent cost of funds. Acceptance of Projects E and F would result in a decrease in the firm’s value. In principle, the optimal capital budget maximizes the value of the firm.

The procedure for determining the optimal capital budget discussed in this section assumes that all projects being considered are equal in risk to the average risk of the firm. Indeed, whenever the weighted cost of capital is used for capital project evaluation, the assumption is being made that the capital project has a level of risk equal to the average risk of the firm. If this is not the case, one of the capital budgeting under risk techniques discussed