Compound interest is interest that is paid not only on the principal but also on any interest earned but not withdrawn during earlier periods. For example, if Jerry Jones deposits $1,000 in a savings account paying 6 percent interest compounded annually, the future (compound) value of his account at the end of one year (FV1) is calculated as follows:

If Jones leaves the $1,000 plus the accumulated interest in the account for another year, its worth at the end of the second year is calculated as follows:

If Jones makes no withdrawals from the account for another year, it will total the following at the end of the third year: 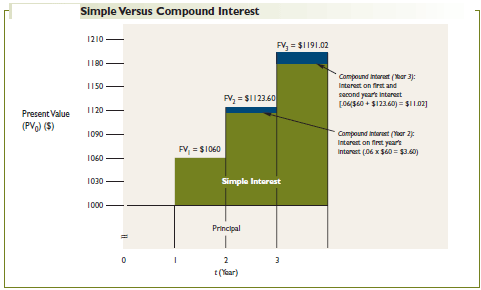 A general formula for computing future values can be developed by combining Equations Substituting Equation into Equation yields the following equation:

This equation can be further generalized to calculate the future value at the end of period n for any payment compounded at interest rate i:

The FVIF may be thought of as the value that $1 today grows to in n periods at a periodic interest rate of i.

Equation may be rewritten as follows:

where i = the nominal interest rate per period and n = the number of periods.

To better understand Table I, it is helpful to think of each factor as the result of investing or lending $1 for a given number of periods, n, at interest rate i.The solution for any amount other than $1 is the product of that principal amount times the factor for a $1 principal amount.
A portion of Table I is reproduced as Table . Table can be used to determine the value of $1,000 compounded at 6 percent for 20 years:

The is arrived at by reading down the 6 percent, or 0.06, column and across the 20 row under the “End of Period(n)” heading to where the row and column meet.

Solving for the Interest Rate

In some compound value problems, the present value (PV0) and future value (FVn) are given and the objective is to determine the interest rate (i) that solves Equation. For example, the future value interest factor for an investment requiring an initial outlay of $1,000 and promising a $1,629 return after 10 years is as follows:

Reading across the 10-year row in Table, 1.629 is found in the 5 percent column. Thus, the investment yields a 5 percent compound rate of return.

Solving for the Number of Compounding Periods

The future value interest factor tables can also be used to determine the number of annual compounding periods (n). For example, to determine how long it would take for $1,000 invested at 8 percent to double, search the 8 percent column to locate a future value interest factor of 2.000. The closest value to this figure is 1.999. Reading to the left of this figure, it can be seen that the original $1,000 would be worth nearly $2,000 in nine years. This problem can also be solved algebraically:

Referring to , the closest value to FVIF = 2.000 under the 8 percent column is 1.999, which occurs at approximately nine years. Compounding can also be illustrated graphically. shows the effects of time, n, and interest rate, i, on the growth of a $100 investment. As the figure shows, the higher the compound interest rate, the faster the growth rate of the value of the initial principal. The notion that an interest rate may be thought of as a growth rate will be useful during later discussions of valuation and cost of capital.