Common stock appears on the right-hand side of a firm’s balance sheet as part of the stockholders’ equity. This is shown for the Lawrence Company in Table.

In other words, the sum of the common stock account, contributed capital in excess of par value account, and retained earnings account equals the total common stockholders’ equity.

The book value per share of common stock is calculated as follows:

In the case of the Lawrence Company,

A common stock’s book value is calculated on the basis of balance sheet figures and does not necessarily have any relationship to the common stock’s market value, which is based primarily on expectations concerning general economic conditions and the firm’s future earnings. The amount shown in the common stock account is calculated by multiplying the number of shares actually outstanding by the par value, an arbitrary value assigned to shares of common stock. To continue with this example, the Lawrence Company has 6.675 million shares outstanding and a $2 par value, resulting in a balance of $13.35 million.

To illustrate the nature of the contributed capital in excess of par value account, suppose Lawrence decides to raise an additional $12 million in external equity capital by selling 600,000 common shares at $20 each. The amount credited to the common stock account is $1.2 million (600,000 shares times the $2 par value). The remainder of the $12 million is added to the contributed capital in excess of par value account. In other words, this account represents capital that is paid into the firm in excess of the par value when common stock is issued. Additions to the retained earnings account occur as a result of earnings retained in the business, as opposed to earnings paid out to the stockholders as dividends.Retained earnings, which are internally generated funds, are one of the most important sources of capital for business.

Common stockholders have a number of general rights, including the following:

Whereas all stockholders have dividend and liquidation rights, in addition to voting rights (unless the stock is specifically nonvoting), preemptive rights exist in a relatively small minority of firms at the present time.

Stockholder Voting Rights A firm’s stockholders elect its board of directors by means of either a majority or a cumulative voting procedure.Majority voting is similar to the voting that takes place in political elections; if two slates of people are running for the board, the one that receives more than 50 percent of the votes wins.With majority voting, it is possible that a group of stockholders with a minority viewpoint will have no representation on the board.

Cumulative voting, in contrast, makes it easier for stockholders with minority views to elect sympathetic board members. Because of this, cumulative voting is rare among major corporations and is frequently opposed by management. For example, in response to a shareholder proposal to adopt cumulative voting, General Mills’ management recommended a vote against the proposal, arguing that it would result in dysfunctional partisanship on the board. In cumulative voting, each share of stock represents as many votes as there are directors to be elected. For example, if a firm is electing seven directors, a particular holder of 100 shares would have 700 votes and could cast all of them for one candidate, thereby increasing that candidate’s chances for being elected to the board. The following formula can be used to determine the number of shares necessary to elect a certain number of directors:

Consider the following example. The Markham Company has eleven members on its board and one million shares of common stock outstanding. If seven members were up for reelection in a given year and all the shares were voted, the number of shares necessary to elect one director would be as follows:

In addition to electing the board of directors, a firm’s stockholders may vote from time to time on various other matters, such as whether to retain a particular auditing firm, or to increase the number of shares authorized.

The election of directors and other voting normally occur at the annual stockholders’ meeting. Because it is usually not possible for all stockholders to attend, management —or anyoneelse —can solicit votes by proxy. Normally, a stockholder can expect to receive a single proxy statement from the firm’s management requesting that stockholders follow management’s recommendations.

In the rather unlikely event that another group of stockholders sends out its own proxy statement, a proxy fight is said to occur. Proxy fights are most common when a company is performing poorly or is in the midst of a takeover attempt.

Other Features of Common Stock

This section covers other topics related to the ownership of common stock, including common stock classes, stock splits, stock dividends, and stock repurchases.

Common Stock Classes Occasionally, a firm may decide to create more than one class of common stock. The reason for this may be that the firm wishes to raise additional equity capital by selling a portion of the existing owners’ stock while maintaining control of the firm. This can be accomplished by creating a separate class of nonvoting stock. Typically, socalled Class A common stock is nonvoting, whereas Class B has voting rights; normally, the classes are otherwise equal.

The Ford Motor Company is an example of a large, widely held company that has more than one class of common stock. Ford’s 71 million shares of Class B stock are held entirely by Ford family interests. This class has 40 percent of the total voting power. Ford’s 1,837 million shares of common stock are held by the public and have 60 percent of the total voting power. The two classes are otherwise equal. As indicated in this chapter’s “Financial Challenge,” Google also plans to have two classes of common stock.

Stock Splits If management feels that the firm’s common stock should sell at a lower price to attract more purchasers, it can effect a stock split. There seems to be a feeling among some in the finance community that the optimum price range for a share of common stock should be roughly $15 to $60. Consequently, if a stock rises above this range, management may decide on a stock split to get the price back to a more desirable trading level.

For example, the per -share price of Amazon.com common stock rose to the $80 range in mid-1999, at which time the board of directors declared a two -for -one stock split. Frequently companies choose to raise their dividend levels at the time of a split. For example, when IBM split its stock two -for -one in 1999, it also increased its quarterly dividend from $0.11 to $0.12 per share.

Many investors believe stock splits are an indication of good financial health. The mere splitting of a stock, however, should not be taken in and of itself as evidence that the stock will necessarily perform well in the future.

From an accounting standpoint, when a stock is split, its par value is changed accordingly. For example, when the split is two -for-one, the par value is reduced by one-half and the number of shares is doubled. No changes occur in the firm’s account balances or capital structure.

Reverse Stock Splits Reverse stock splits are stock splits in which the number of shares is decreased. They are used to bring low-priced shares up to more desirable trading levels. For example, in mid-1996 Tucson Electric Power (now UniSource Energy), the troubled electricutility, declared a one -for -five reverse stock split. After the split, Tucson’s stock traded in the range of $16 per share. In addition to the negative image accorded low-priced stocks, Tucson’s management was concerned that potential investors would be unwilling to buy the stock due to the higher (percentage-wise) commissions on low-priced stocks. Many investors feel reverse stock splits indicate poor corporate health. For this reason, such splits are relatively uncommon.

Stock Repurchases From time to time, companies repurchase some of their own shares (known as treasury stock). Figure contains an announcement of such a share repurchase by TRW. In addition to undertaking share repurchases as an alternative to the payment of cash dividends, a company may have a number of other reasons for repurchasing its own stock. These include 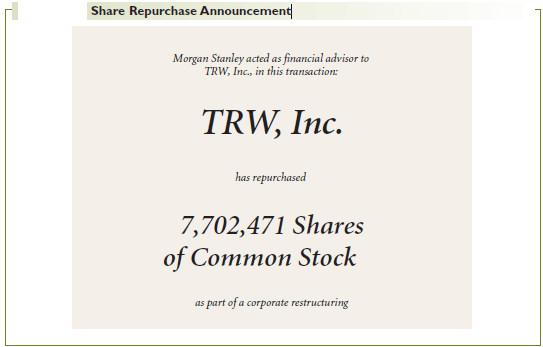 These reasons are not mutually exclusive—a firm may repurchase shares for a combination of reasons.

One of the major advantages of common stock financing is that no fixed -dividend obligation exists, at least in principle. In practice, however, dividend cuts are relatively uncommon for companies paying a “regular” dividend, a fact that implies that corporate management generally views a firm’s current level of dividends as a minimum for the future. Nevertheless, common stock financing does allow firms a greater degree of flexibility in their financing plans than fixed -income securities. Thus, common stock is less risky to the firm than fixed -income securities. Limits on additional debt and the maintenance of working capital levels are only two of the constraints imposed on a firm when fixed -income security financing is employed.

Notice that whereas the firm’s net income increased in 2006 over 2005, its earnings per share declined because of the new shares issued. Thus, the additional issue of common shares can dilute the original owners’ claims on the firm’s earnings. If, on the other hand, the new assets earn a higher rate of return than the existing assets, the original owners will benefit from the increased earnings. Also, the problem of diluted earnings should be only temporary if the firm is investing wisely and should have no adverse consequences in a well -informed market.