The times interest earned and fixed -charge coverage ratios were introduced. These ratios provide an indicator of the ability of a firm to meet its interest and other fixed charge obligations (including lease payments, sinking fund payments, and preferred dividends) out of current operating income. Also, in that chapter, liquidity ratios, such as the current ratio and the quick ratio, were introduced.

Liquidity ratios provide a simple measure of a firm’s ability to meet its obligations, especially in the near term. In that chapter, we also indicated that the best measure of a firm’s cash adequacy can be obtained by preparing a detailed cash budget.

Coverage ratios and liquidity ratios do not provide an adequate picture of a firm’s solvency position. A firm is said to be technically insolvent if it is unable to meet its current obligations. We need a more comprehensive measure of the ability of a firm to meet its obligations if this information is to be used to assist in capital structure planning.

This measure must consider both the cash on hand and the cash expected to be generated in the future. Donaldson has suggested that a firm’s level of fixed financial charges (including interest, preferred dividends, sinking fund obligations, and lease payments), and thus its debt -carrying capacity, should depend on the cash balances and net cash flows that can be expected to be available in a worst -case (recessionary environment) scenario. This analysis requires the preparation of a detailed cash budget under assumed recessionary conditions.

Donaldson defines a firm’s net cash balance in a recession, CBR, to be

where CB0 is the cash (and marketable securities) balance at the beginning of the recession, and FCFR is the free cash flows expected to be generated during the recession. Free cash flow represents the portion of a firm’s total cash flow available to service additional debt, to make dividend payments to common stockholders, and to invest in other projects. For example, suppose MINECO, a natural resource company, reported a cash (and marketable securities) balance of approximately $154 million. Suppose also that management anticipates free cash flows of $210 million during a projected 1-year recession.

These free cash flows reflect both operating cash flows during the recession and current required fixed financial charges. Under the current capital structure, consisting of approximately 32 percent debt, the cash balance at the end of the recession would be $364 million ($154 million plus $210 million). Assume that the management of MINECO is considering a change in its capital structure that would add an additional $280 million of annual after-tax interest and sinking fund payments (i.e., fixed financial charges). The effect would be a cash balance at the end of the recession of

The managers of MINECO must decide if this projected cash balance of $84 million leaves them enough of a cushion in a recession.

This analysis can be enhanced if it is possible to specify the probability distribution of expected free cash flows during a recession. For example, if the MINECO managers believe, based upon past experience, that free cash flows are approximately normally distributed with an expected value during a 1-year recession (FCFR) of $210 million and a standard deviation of $140 million, they can compute the probability of running out of cash if the new debt is added.

Employing an expression similar to Equation , where cash balance (CBR) is the variable of interest rather than EBIT, a cash balance of $0 is equivalent on the standard normal curve to the following:

The MINECO managers may feel that this is too much risk to assume. If they only want to assume a 5 percent risk of running out of cash during a 1-year recession, they can determine the amount of additional interest and sinking fund payments (i.e., fixed financial charges) that can be safely added. First, find the number of standard deviations (z) to the left of the mean that gives a 5 percent probability of occurrence in the lower tail of the distribution. From Table , this value of z is found to be approximately –1.65.Next, we calculate the expected cash balance (CBR) needed at the end of a 1-year recession if the risk of running out of cash is to be held to 5 percent:

The willingness of management to assume the risk associated with running out of cash depends on several factors, including funds available from outstanding lines of credit with banks and the sale of new long-term debt, preferred stock, and common stock, and the potential funds realized by cutting back on expenses during a business downturn, reducing dividends, and selling assets. 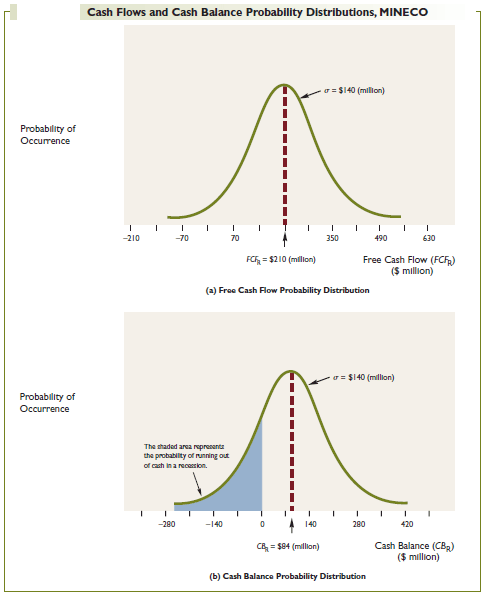