The valuation of bonds is a relatively straightforward process because future cash flows to the bondholder are always specified ahead of time in a contract. The firm issuing the bonds must meet the interest and principal payments as they come due or the bonds will go into default. Defaulting on bond payments can have disastrous consequences for the firm and its stockholders, such as possible bankruptcy, reorganization, or both.

Bonds that mature within finite periods of time pay the investor two types of returns: interest payments (I1, I2,..., In) during each of the next n periods and a principal payment (M) in period n. Period n is defined as the bond’s maturity date, or the time at which the principal must be repaid and the bond issue retired.

The value of a bond can be computed by applying the capitalization of cash flow method to the series of cash flows:

where P0 is the present value of the bond at time zero, or its purchase date, and kd is the investor’s required rate of return on this particular bond issue.

To illustrate the use of Equation, consider the following example. AT&T issued $3 billion of 6 percent bonds maturing on March 15, 2012. The bonds were issued in $1,000 denominations (par value). For purposes of simplifying this example, assume that the bonds pay interest on March 15 each year.

An investor who wishes to purchase one of these AT&T bonds on March 15, 2005, and requires an 8 percent rate of return on this particular bond issue would compute the value of the bond as follows. These calculations assume that the investor will hold the bond until maturity and receive seven annual (n = 7) interest payments of $60 each(I = $1,000*0.06) plus a principal payment, M, of $1,000 at the end of the seventh year, March 15, 2012. The expected cash flows from this bond are shown in Figure. Substituting these values along with kd = 8 percent (0.08) into Equation gives the following value for the bond:

In other words, an investor requiring an 8 percent return on this AT&T bond would be willing to pay approximately $896 for it on March 15, 2005. A question often arises as to why investors would require an 8 percent rate of return on bonds that pay only 6 percent interest. The answer is that the required rate of return has increased since the bonds were originally issued. At the time of issue, the prevailing rate of interest (that is, the required rate of return) on bonds of this maturity and quality was approximately 6 percent.

Hence, the coupon rate was set at 6 percent. Because of such factors as tight credit market conditions, higher inflation, increased firm risk, and so on, investors now require a higher rate of return to induce them to purchase these bonds. An investor who desires more than an 8 percent rate of return on the AT&T bond would value it at a price less than $896. Similarly, an investor who requires less than an 8 percent rate of return would value it at a price greater than $896. This inverse relationship between the required rate of return and the corresponding value of a bond to the investor is illustrated for bonds with 3-year and 15-year maturities in Table.

However, if the market price of the bond declines due to a rise in prevailing interest rates and if the bond is sold prior to maturity, the investors will earn less than their required rate of return and may even incur a loss on the bond. This variation in the market price (and hence in the realized rate of return) of a bond (or any fixed income security) is known as interest rate risk.

Cash Flows from an AT&T Bond 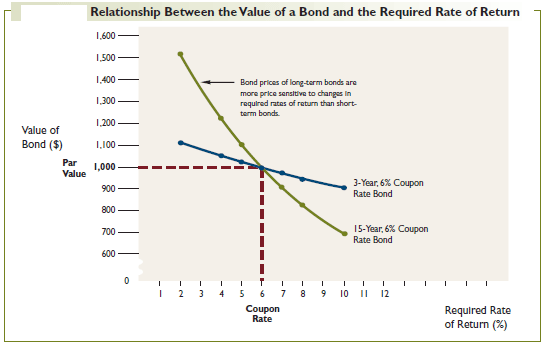 Reinvestment rate risk occurs when a bond issue matures (or is called) and, because of a decline in interest rates, the investor has to reinvest the principal at a lower coupon rate. For example, the owner of the Ford 30-year, 87⁄8 percent debentures, purchased at the time of issue in 1992, is receiving $88.75 annual interest per bond.However, as noted earlier, this bond issue was callable beginning in 2002. If Ford decided to call the bonds because of a decline in interest rates since the time of issue, the bondholder would probably be unable to reinvest the principal in another bond, of comparable risk, that yielded a 87⁄8 percent (or higher) rate of return.

Semiannual Interest Payments Most bonds, such as the AT&T bonds, pay interest semiannually. Recall from the discussion of “Effect of Compounding Periods on Present and Future Values” in PREVIOUS Chapter, the required rate of return (kd) is divided by 2 and the number of periods (n) is multiplied by 2. Therefore, with semiannual interest payments and compounding, the bond valuation formula becomes:

With semiannual interest and compounding, the value for the AT&T bond is calculated as follows:

A perpetual bond, or perpetuity, is a bond issued without a finite maturity date.Perpetual bonds promise to pay interest indefinitely, and there is no contractual obligation to repay the principal, that is, M = 0.

The valuation of a perpetual bond is simpler than the valuation of a bond having a finite maturity date. Assuming that the bond pays a fixed amount of interest, I, per period forever, the value is as follows:

where kd is the required rate of return. Equation can be simplified to obtain the following expression:

Consider, for example, the Canadian Pacific Limited Railroad’s perpetual 4 percent debentures. What is the value of a $1,000 bond to an investor who requires an 8 percent rate of return on these Canadian Pacific bonds? Because I = 0.04 *$1,000, or $40, and kd = 8 percent, Equation can be used to compute the answer as follows:

Thus, the investor would be willing to pay up to $500 for this bond.

Yield to Maturity of a Bond

For bonds with a call feature, the expected yield to call can also be computed. This is done by replacing the maturity value (M) by the call price and the number of years until maturity (n) by the number of years until the company can call the bond. If present interest rates are significantly below the coupon rate on the (callable) bond, then it is likely that the bond will be called in the future. In such a case, the relevant expected rate of return on the bond is the yield to call rather than the yield to maturity.

Zero Coupon Bonds For zero coupon bonds that pay no interest over their life, the only payment to holders is the principal payment at maturity. To illustrate the calculation of the yield-to-maturity for such a bond, consider the Honeywell International zero coupon money multiplier notes that mature on April 21, 2012. Suppose these bonds (having a par value of $1,000) were purchased for $600 on April 21, 2004 (eight years prior to maturity). Determine the yield to maturity on these bonds.

shows cash flows from the purchase of a Honeywell International zero coupon bond. Because there are no interest payments, the yield -to-maturity equation can be simplified to

From Table at the back of the book, we find this present value interest factor in the 8- year row between the 6 percent (0.627) and 7 percent (0.582) interest rate columns.Hence, by interpolation, the yield to maturity ( k d) on this zero coupon bond is approximately

During the 1980s and early 1990s, many firms were acquired or financially restructured in a transaction called a leveraged buyout (LBO). In a typical LBO, the buyer of the firm borrows a large amount of the purchase price, using the purchased assets as collateral for a large portion of the borrowings. Debt ratios (debt to total capital) of 90 percent or more have not been uncommon in early LBOs.

LBOs have led to enormous wealth increases for the common stockholders of the acquired firm. For example, RJR Nabisco (RJR) shareholders saw the value of their common stock increase from the mid-50s price range to over $100 when the firm was acquired by Kohlberg Kravis Roberts in an LBO. Bondholders generally have not fared quite so well.The impact of most LBOs has been a decline in the bond ratings of the acquired or restructured firm because of the substantial increase in perceived risk. Declines in the market value of bonds for firms acquired in LBO transactions have averaged about 7 percent. In the case of the RJR transaction, these bondholder losses initially exceeded 20 percent.

In the RJR case, several large bondholders, notably Metropolitan Life Insurance and Hartford Insurance, sued RJR, claiming among other things that RJR management had the duty to disclose that it was considering the possibility of an LBO at the time it issued bonds six months prior to the announcement of the LBO. Metropolitan Life sought compensation for its bond losses not just on the recent bond issue but also on earlier bond issues of RJR that it held. Do you think that RJR bondholders and the bondholders in many other firms that were restructured with LBOs have a right to compensation from the firm’s owners to offset bondholder losses in these transactions?

What role do you think bond covenants should play in an analysis of the rights of bondholders and the obligations of management? How can bond holders protect themselves from losses arising out of LBOs?

Cash Flows from the Purchase of a Honeywell International Zero

Perpetual Bonds The rate of return, or yield to maturity, on a perpetual bond can be found by solving the perpetual bond valuation equation presented earlier for kd:


For example, recall the 4 percent Canadian Pacific Limited Railroad debentures described earlier. If the current price of a bond is $640, what is the yield on the bond? Substituting P0 = $640 and I = $40 (or 4 percent of $1,000) into Equation gives the following: