The previous example of an asset expansion project illustrated the key elements of the calculation of a project’s net investment and its annual net cash flows. In this section, we consider an asset replacement project. Asset replacements involve retiring one asset and replacing it with a more efficient asset.

Suppose Briggs & Stratton purchased an automated drill press 10 years ago that had an estimated economic life of 20 years. The drill press originally cost $150,000 and has been fully depreciated, leaving a current book value of $0. The actual market value of this drill press is $40,000. The company is considering replacing the drill press with a new one costing $190,000.

Shipping and installation charges will add an additional $10,000 to the cost. The new machine would be depreciated to zero on a straight-line basis. The new machine is expected to have a 10 -year economic life, and its actual salvage value at the end of the 10 -year period is estimated to be $25,000. Briggs & Stratton’s current marginal tax rate is 40 percent. 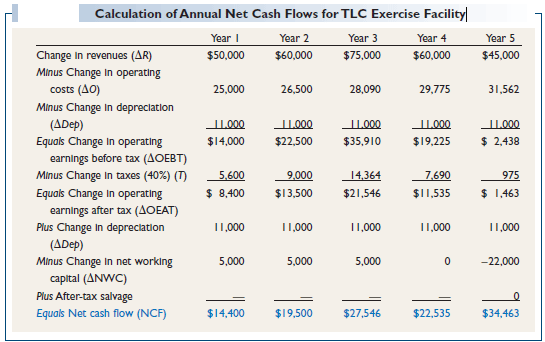 Steps 1 and 2 of the net investment calculation are easy; the new project cost($190,000) plus shipping and installation ($10,000) is $200,000. In this case, no initial incremental net working capital is required. In steps 3 and 4, the net proceeds received from the sale of the old drill press have to be adjusted for taxes.

Because the old drill press is sold for $40,000, the gain from this sale is treated as a recapture of depreciation and thus taxed as ordinary income. Table summarizes the NINV calculation for Briggs & Stratton. As can be seen in this table, the NINV is equal to $176,000.

Suppose Briggs & Stratton expects annual revenues during the project’s first year to increase from $70,000 to $85,000 if the new drill press is purchased. (This might occur because the new press is faster than the old one and can meet the increasing demands for more work.) After the first year, revenues from the new project are expected to increase at a rate of $2,000 a year for the remainder of the project life.

Assume further that while the old drill press required two operators, the new drill press is more automated and needs only one, thereby reducing annual operating costs from $40,000 to $20,000 during the project’s first year. After the first year, annual operating costs of the new drill press are expected to increase by $1,000 a year over the remaining life of the project. The old machine is fully depreciated, whereas the new machine will be depreciated on a straight -line basis.

Using the different expected values for new revenues Rw = $87,000 and new operating costs Ow = $21,000 in the second year, the second-year net cash flows can be computed as follows:

Similar calculations are used to obtain the net cash flows in years 3 through 9.

Finally, in year 10, the $25,000 estimated salvage from the new drill press must be added along with its associated tax effects. This $25,000 salvage is treated as ordinary income because it represents a recapture of depreciation for tax purposes.

Table We shown here is a summary worksheet for computing the net cash flows for Briggs & Stratton during the 10-year estimated economic life of the new drill press.

Table We shown summarizes the net cash flows for the entire project. This schedule of net cash flows plus the NINV computed in the preceding section form the basis for further analysis. several different capital budgeting decision models are applied to similar cash flow streams from other projects to determine the investment desirability of these projects. The cash flows developed in this chapter are an essential input in the capital budgeting decision process.