The preceding discussion of ratios indicates that a firm’s return on investment (ROI) is defined as the ratio of earnings after taxes (EAT) to total assets. The ROI ratio can be examined more closely to provide additional insights into its significance. 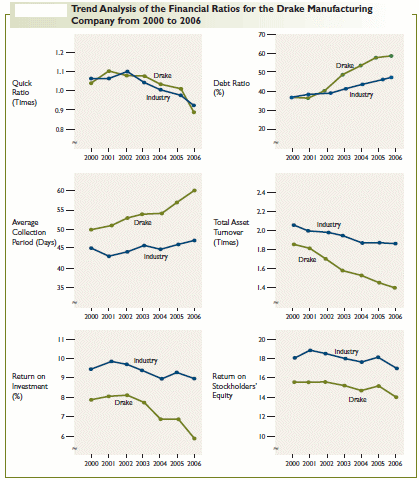 It is important to examine a firm’s ROI in terms of “margin” and “turnover,” because each plays a major role in contributing to profitability.“Margin” measures the profit earned per dollar of sales but ignores the amount of assets used to generate sales. The ROI relationship brings these two components together and shows that a deficiency in either one will lower a firm’s return on investment.

Using the figures from the net profit margin ratio and total asset turnover ratio calculated previously for the Drake Company, the firm’s ROI for 2006 can be computed as 4.45% _1.377 = 6.13 percent. We called a modified DuPont chart because it was developed and first used by the DuPont Corporation, illustrates this relationship. For purposes of comparison, the industry average ROI = 5.10% _ 1.82 = 9.28 percent. The ROI relationship shows Drake to be deficient in both margin and turnover relative to the industry average.

Improvement in either area would increase the firm’s ROI. To improve its margin, for example, Drake must either increase sales revenues more than costs or decrease costs more than sales revenues. To improve its turnover, the firm must either increase sales revenue or reduce the asset level required to support the current sales volume. The DuPont chart illustrates the relationship between a firm’s ROI and the factors that determine it. By working back through the DuPont chart, an analyst can begin to pinpoint potential areas for improvement that will enhance the firm’s ROI.

The relative contributions of the net profit margin and the asset turnover ratio in the ROI relationship differ from industry to industry. Specifically, the turnover ratio is dependent largely on a firm’s investment in property, plant, and equipment. Firms with large investments in fixed assets tend to have low turnover ratios; public utilities, railroads, and large industrial firms fall into this category. If these companies are to succeed, their relatively low turnover ratios must be offset by correspondingly high margins to produce competitive ROIs. For example, electric and gas utilities typically have net profit margins of 10 to 15 percent. In contrast, other industries require much lower investments in fixed assets, resulting in higher turnover ratios.

A typical example is the retail grocery chain industry, which has margins of only 1 or 2 percent. Firms in this industry often achieve turnovers of 10 times or more. If a grocery chain had a lower turnover, its ROI probably would not be sufficient to attract investors. 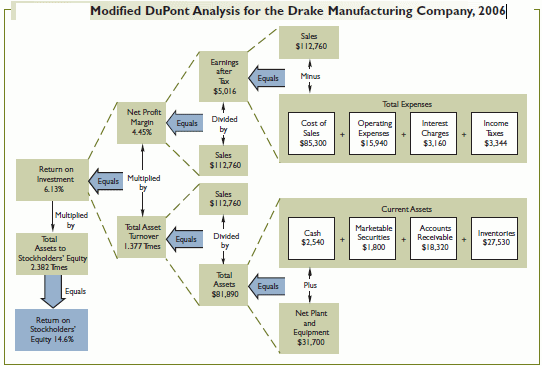