What Is ActiveX? - File Maker

This is a very good question. The meaning of this term has actually grown and evolved quite a bit over the years, and FileMaker’s use of the term is misleading.

But this much is true: ActiveX is the marketing name Microsoft came up with to describe a group of somewhat new programming and scripting technologies based on the Component Object Model (COM). COM, in many ways, is the core foundation on the Windows side for interaction among all types of software, which allows developers to integrate Windows applications with one another and with the Windows operating system.

ActiveX was sort of the more sophisticated progeny of Object Linking and Embedding (OLE) technology, which, as you learned earlier in this, allows you to combine portions of several applications into one document by, for example, embedding an Excel spreadsheet or a Microsoft Paint image into a FileMaker database’s container field. Microsoft originally defined ActiveX as specific to Internet applications and technologies. Currently Microsoft uses the term ActiveX as a sort of catch-all to describe many different COM-based technologies, including OLE, which can be built with widely available tools such as Microsoft’s Visual Studio.

To confuse you even further, FileMaker documentation’s use of the term ActiveX is not exactly correct. FileMaker Pro software is not an ActiveX component like other ActiveX components that are available on the Internet. In fact, it would be more accurate to say that FileMaker Pro’s so called ActiveX automation is really like having access to FileMaker Pro’s External Function Plug-in (EFP) Application Programming Interface (API), allowing you to remotely control the application from “outside” of it.

The following illustration shows several of the most popular ActiveX components that you can integrate into your FileMaker solutions. 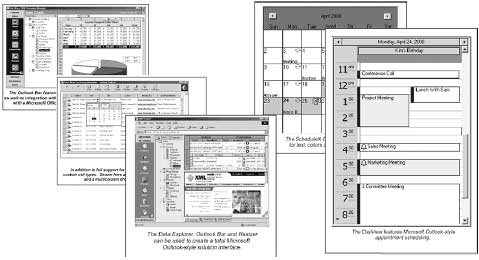