What is a Plug-in? - File Maker

A plug-in is small a piece of software that acts as an extension to the built-in capabilities of FileMaker Pro. This doesn’t mean that plug-ins are extras that you always need to purchase in addition to the FileMaker software. Although FileMaker works out of the box to publish Web sites and enables you to download new versions of plug-ins from a server, these capabilities are actually plug-ins that have been built by FileMaker, Inc. They are included with the FileMaker Pro software, but are not part of the built-in feature set of FileMaker.

But beyond what FileMaker includes as part of the software that they sell, other developers have the ability to write plug-ins that will work with FileMaker to provide capabilities that FileMaker, Inc. never imagined. 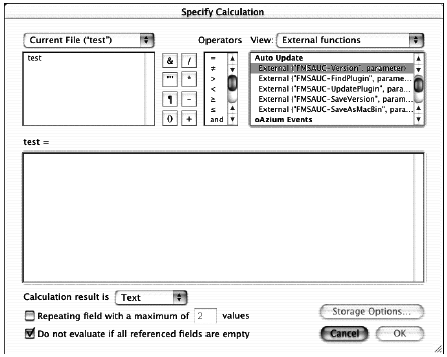 An external function call to a plug-in. 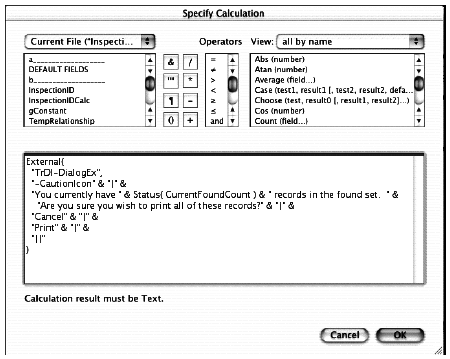 Given that only one parameter can be passed to an external function, plug-in developers have come up with a somewhat standard method for passing multiple pieces of information. Most plug-ins will separate multiple parameters with the pipe (“|”) character. You’ll see this more clearly as you read about specific plug-ins.

There are plug-ins that can do just about everything you might imagine, and if there isn’t a plug-in that satisfies your need, you can create your own!

To Use or Not to Use a Plug-In
Using plug-ins does involve some trade-offs. To get the functionality that a plugin provides, you have to make sure it’s installed on every workstation that will access your database system. If you’re working on an internal system where you have control of the files on each machine, this involves installing the plug-in on all of the machines on your network. If you’re distributing a runtime solution with FileMaker Developer, this involves including the plug-in with the distribution of your software (and getting a developer license for the plug-in). Plug-ins are often updated with new versions, and FileMaker Server provides an easy way to ensure that client machines have the most recent plug-in with the Auto Update plug-in.

Another item to consider is whether you are building a cross-platform solution. If so, does the plug-in you’re considering using come in versions for Windows and Macintosh (and Mac OS X)? If not, is there another plug-in that is cross-platform that can accomplish the required task?

Using a plug-in also requires more education on your part. Plug-ins can be very complex, some offering dozens of functions. Each function is basically adding vocabulary to FileMaker, often used within scripts, but also within calculation fields. Learning how to use the plug-in can be time consuming, although most included electronic manuals are quite complete and many plug-ins also offer demo databases that take you through the process of using them.

There are often ways to get what you need done without a plug-in, but they have trade-offs also. For instance, if you’re developing a solution only for the Macintosh platform, many of the things that plug-ins can accomplish can also be done with AppleScript or another application such as Microsoft Excel. Apple-Script is included free with every Macintosh, so there’s no additional expense involved, but the trade-off is that your solution will only work on Macs and you need to learn the AppleScript programming language. Windows computers can do similar things with a program called WinBatch, but it isn’t included on Windows systems for free. Before deciding that a plug-in is the way to go for your solution, consider all of your options.

How to Install Plug-Ins
Installing a plug-in is simply a matter of placing the plug-in into the right folder. For Macintosh systems, this is the FileMaker Extensions folder found within the same folder as your FileMaker Pro application. On Windows systems, the plug-in should be copied to the System folder within the FileMaker Pro application’s folder. Before installing a plug-in, be sure to quit FileMaker. Otherwise, the plugin won’t be loaded, and you’ll have to quit and relaunch FileMaker anyway. 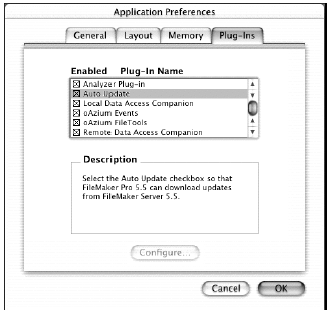 If there are configuration options for the selected plug-in, then the Configure button will be enabled when the plug-in is selected. Figure below shows an example of the configuration window for the Web Companion plug-in. Most plug-ins don’t require much in the way of configuration; you simply call the plugin’s external functions. Some, such as SMTPit, an emailing plug-in, offer a wide range of configuration options (for mail servers, user names, and such), although you can generally leave the default settings as they are. 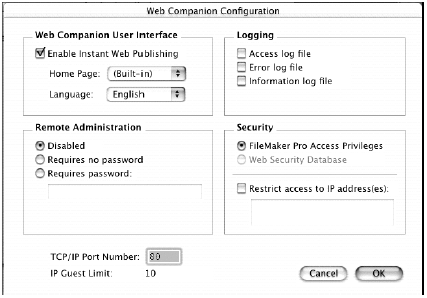 Often, for commercial plug-ins, the configuration window is where you’ll enter a serial number to register and unlock a plug-in once you have purchased it. In addition, some plug-ins offer developer licenses, which means that you can include the plug-in with solutions that you offer to your customers.

To enter a serial number for such a plug-in, there’s often an option to do so within a script using one of the external functions that the plug-in offers. This saves you time because you don’t have to go to every machine from which your database system will be accessed and manually enter a serial number. (As a precaution, FileMaker only allows the plug-in to work with your solution; users who don’t have a license for the plug-in can’t use it apart from your solution.)

Where to Find Plug-Ins
Here you can search for plug-ins that fall within defined categories, such as Graphics or Scripting. There are dozens of plug-ins available for FileMaker, with more coming out all the time.

Once you find a plug-in that interests you, you’ll find links to the Web site that has the plug-in. Most plug-ins are available as demonstration versions for you to check out before you have to commit to purchase them.