To begin, open Company.fp5 in the Computer Shop folder on the CD-ROM. Under the Scripts menu you’ll see the only option available (unless you’re using FileMaker Developer): ScriptMaker (a utility so important it gets its own menu!). Select ScriptMaker and you’ll see the Define Scripts dialog: 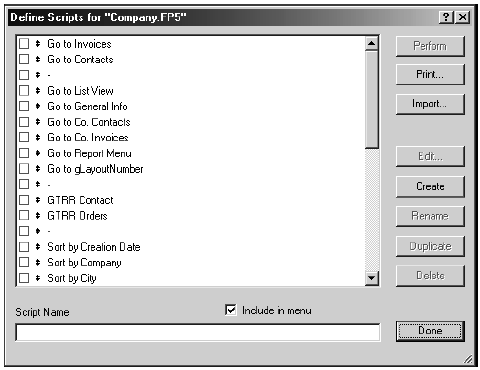 Take a moment to explore this interface. First note that the dialog is resizable by clicking and dragging the lower right corner. (FileMaker remembers how you left it, too, when you return to this dialog.) You can close the dialog with the Done button or by pressing ESC.

In the large white area you’ll see a list of all scripts currently defined for this database. If you drag the up/down arrows at the left of any script name (up or down, of course) you can arrange the order of the scripts top to bottom in this dialog (there’s no sort button). If you check the box to the left of the arrows, that script will be available to users of the database under the Scripts menu and can be run when selected.

If you check a box next to a script and leave the Define Scripts dialog, you’ll see under the Scripts menu that that script is now available. Also, note that the first ten scripts with checkboxes in Define Scripts will have shortcut keys associated with them (CONTROL 0-9/COMMAND 0-9), adding yet another level of convenience to running scripts. (Developers often allow access in this way to their Help and About This Database scripts at the top of the Scripts menu.)

Renaming Scripts
Now highlight any script by clicking it. Note that the script’s name now appears in the Script Name box at the bottom of the dialog. You can now change the name of the script and click the now-enabled Rename button to rename it.

Printing Scripts
To print a script, click the Print button. The print dialog will come up with the script you were on highlighted. Continue through this dialog to print.

Duplicating Scripts
Select one or more scripts (by CONTROL-/COMMAND- or SHIFT-clicking some) and click the Duplicate button. Copies of all selected scripts will appear at the end of Define Scripts with the word “Copy” appended to each.

Editing Scripts
To edit the content of a script, just double-click it. Or click it and select the Edit button. The Script Definition dialog will come up (more on this dialog soon).

Deleting Scripts
Select one or more scripts (by CONTROL-/COMMAND- or SHIFT-clicking some) and click the Delete button. Confirm the deletion. This is not undoable.

Creating Scripts
To create a script, just put your cursor in the Script Name box, type a script name and press the Create button. The Script Definition dialog will come up (more on this dialog soon).

Importing Scripts
There’s a handy import feature in Define Scripts, allowing you to bring already written scripts from other compatible FileMaker Pro databases into your current database so you can use them as a starting point. Try it! Click the Import button, and navigate to the Contact.fp5 database of the same solution. You’ll then see the Import Scripts dialog, enables you to check all the scripts you want to bring in from the other database.

Put a check to the left of the GTTR Company script and press OK (GTTR stands for go to related record). Note that you get a dialog saying there were errors while importing the script. This is FileMaker Inc.’s disclaimer that FileMaker did its best when importing the script to match up any fields, relationships, layouts and the like from the database you’re importing from to the current database. However, if it can’t make a match, it will put a placeholder in that particular script step (“<Field Missing>” for field name, for example) for your editing. Press OK, and the newly imported script appears at the bottom of Define Scripts with the word “Imported” appended to its name.