Now it’s time to take a look at the code within a script. Go ahead and double-click the GTRR Orders script in Company.fp5. You’ll see the Script Definition dialog, which has a few major parts: 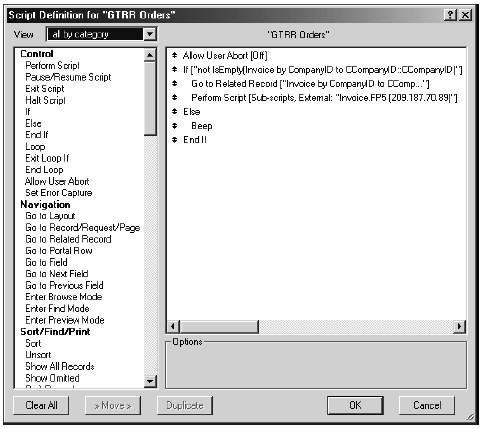 First, there’s the script step library that cascades down the left side of the screen. These are all the script steps that are available to you. Using the dropdown menu at the top, you can view all scripts by category (the default), all alphabetically, or a certain set of scripts by specific category.

The buttons at the bottom of this dialog do the following:

Clear all — clears (deletes) all selected script steps from the script, allowing you to start over with a blank slate.

Clear — deletes the currently selected script step (or steps, if several have been selected by CONTROL- /COMMAND- or SHIFT-clicking them) from the script’s definition when a script step is highlighted. You can also remove them by pressing the DELETE key.

Duplicate — Duplicates all selected script steps, putting the duplicated steps in the same order just after the steps that were duplicated.

OK — Leaves the script’s definition, saving any changes you’ve made to the script.

Cancel — Leaves the script’s definition without saving any changes.