Sometimes, you’ll want to arrange your records in a particular order (“Sort all records by invoice date, with the oldest first,” or “Let me see all contacts in the found set in alpha order, sorted first by last name, then by first name, with the As first.” FileMaker’s handy built-in sort feature will help you do just that.

Go into Company.fp5 to the List View layout and select Show All Records from the Records menu (if the current found set isn’t already all records). Now right-click /CONTROL-click the CompanyName field of the first record (on the contents of the first record’s field, for example, “ACME Corp.”) and select Sort Ascending from the contextual menu that comes up. Voila! It’s that simple. The records are now sorted A to Z on CompanyName.

From the same menu, you can sort the records in descending order, too, and by value list. The last one will sort the values in the field you’re sorting on based on the order in which values are listed in a predefined value list. For instance, you could use this if your fiscal year starts in July and whenever you sort by the MonthName field you want the sort to have July first and June last. All you have to do is set up a value list that has the months listed in this order and then sort by value list in ascending order from the contextual menu.

The Sort Records Dialog
The above method of sorting is the “simple” way to sort records, but there’s also a more complex way, which allows you to sort on many fields at once. To try this out, go into browse mode in Company.fp5 and select Sort from the Records menu. You’ll see the dialog below. On the left, you can select the fields you want to sort on. 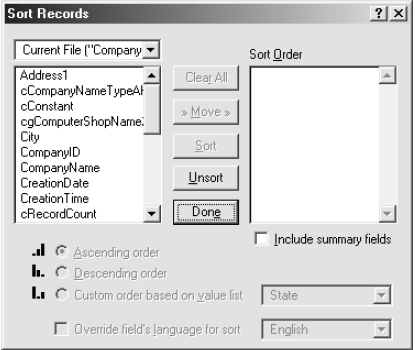 Creating a Sort Order
Try this dialog out.

Sorting by Subsummary Fields
Say you want to sort some records based on values that are calculated in a summary field. For instance, you might have a summary field that calculates how many orders each contact has placed with your company. Instead of doing a summary report that summarizes the data by contact name, you might want to sort it so that you could see who had placed the most orders. To do so, you would need to sort and summarize on the summary field.

But because FileMaker’s built-in help system covers this so nicely, I’ll refer you to that instead of using up more trees here. Search for “Sorting records by subsummary values.”

Common Sorting Problems
Here are some common sorting problems and how to fix them:

To solve this problem, switch the field’s definition to a number field or somehow add leading zeros to the numbers so that they’re 01, 02, 03, and so on. Then they’ll sort correctly.