Several third-party tools can help you document, analyze, and even troubleshoot your scripts. In this section you’ll learn about these tools and where to find them.

To produce a database design report, simply pick the databases you want to analyze and then choose the parts of the databases to document (such as fields, layouts, scripts, and so on). Then, choose whether you want the report generated as a FileMaker database or an XML file (which can be opened in a Web browser).

You’ll be asked where you want to save the report and then the report will be created, which may take several minutes depending on the size and complexity of your solution. (Create a folder to store the XML version of the report in because it generates lots of little ancillary files.) 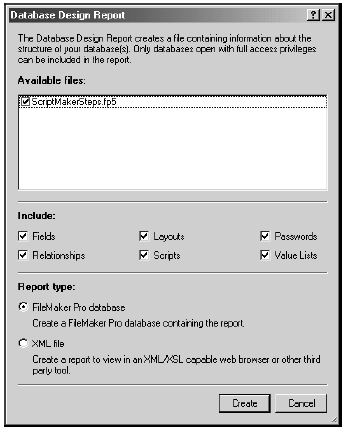 A finished report in database format looks like the image below. The report can be printed and browsed with onscreen buttons. You can drill down to almost any level of detail and can document the solution using the Comments field for each element. 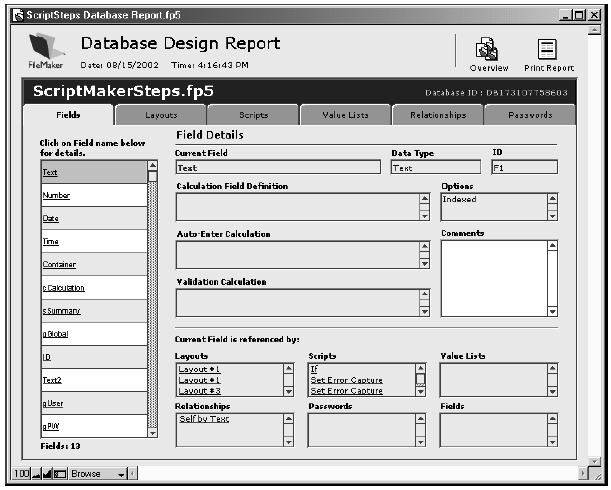 The Analyzer
Waves in Motion makes a product called The Analyzer that does much of what the Database Design Report does and quite a bit more. It can run multiple analyses on the same system and compare changes; it allows you to do keyword searches across all elements (“How many fields are called ModifiedDate in this system?”); and it offers many other interesting reports and a pleasant GUI.

But its most awesome feature is the built-in problem detection, which finds and flags common database structural problems, like missing scripts, missing fields, buttons not attached to anything, and the like. This tool is essential for any FileMaker developer. The Analyzer requires that you have FileMaker Developer.

MetaDataMagic
New Millennium Communications offers a product called MetaDataMagic, another fine script analysis and general database documentation tool. It does much the same thing as The Analyzer with a few unique features such as the ability to analyze solutions larger than 50 databases, to analyze version 3 (.fp3) FileMaker databases without converting them to version 5/6 (.fp5), and to run in the background. It has great search features, and the functioning of cross-referencing objects to one another is also second to none.

MetaDataMagic does not require that you have FileMaker Developer, which is good for small budgets.

Brushfire
Chaparral Software makes Brushfire, a powerful script analysis tool. You’ll find this tool indispensable when trying to visualize how a certain script in a complex database system relates to other scripts and the rest of the database.

Brushfire takes a little bit longer to set up than other tools (and requires the installation of PrintToPict software on a Mac), but your time will come back to you tenfold with Brushfire’s lightning-fast processing of your solution’s scripts.

Brushfire’s detailed HTML-based reports list dependencies, platform-specific script steps present in scripts, and script errors (missing links and such), and it enables you to have unlimited numbers of open windows/views in your reports.

The program has a nice GUI too, and it’s cheap. Brushfire also does not require that you have FileMaker Developer.

AutoScript.fm Pro — Macintosh Only
Though this tool has not been updated in a while, if you are developing database systems in FileMaker Pro versions 4 through 5.0, you might like it. It helps you to import and export scripts from one database to another, even across the incompatible 4 and 5 file formats. It is also useful for printing scripts to text so that you can print them and search through them. Too, unlike FileMaker’s built-in script import feature, AutoScript.fm Pro will bring up interactive dialogs upon import, allowing you to correct any errors in missing fields or relationships and making your newly imported scripts error-free right off the bat!

Besides only supporting FileMaker through version 5, the only other problem with this software is that it is Mac only, and it no longer seems to be in active development. Don’t bother checking the software’s Web site because it will return a “page not found” error;