Who says that FileMaker Pro is only for keeping track of clients, projects, time sheets, and invoices? Who says that all you can do with FileMaker is run elegant reports and integrate with external applications? Not you! FileMaker Pro can be used for fun and unproductive projects, too, as the solutions in this section indicate.

Of course, this is only a small sample. Why not challenge yourself to come up with your own bit of FileMaker fun and share it with the rest of the FileMaker community?

A game built in FileMaker Pro is not really an “external application” to which FileMaker Pro links, but there’s no reason you can’t experience a little FileMaker amusement. Think of this as FileMaker Pro’s link to the flight of your imagination.

DopeWars
Brian Dunning created this little game. You are a drug dealer wandering through the streets of New York City buying and selling drugs, avoiding the cops, and causing trouble. Yes, it’s about selling narcotics, but it’s also a lesson in the economics of a free market society. It’s also about a whole lot more. Here’s a glimpse of a drug buy in the ghetto. . . . 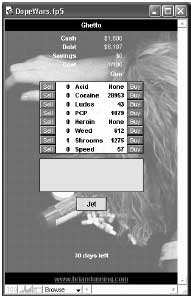 Sea Battle
The author had some spare time on his hands a year or so ago so he threw together this never-released Battleship-esque game. It’s a cool multi-user game (complete with elegant graphics and sound effects) that you can play on FileMaker Server. Keep in mind that in one-player mode, it isn’t hard to beat the computer. Sea Battle requires the Troi Text plug-in in order to work.

Uacamole!
Remember that game at the local pizza place that has you whacking the heads of moles furiously for a few minutes with the payoff being a handful of tickets with which you can buy a fashionable spider ring? This is the author’s version of that game.

Knight’s Tour
There’s a classic computer programming problem that goes something like this: Given an empty chess board and one knight piece placed anywhere on that board, create a program that will have that knight jump to each of the 64 squares on the board in 64 moves. (You must end on the square you start from and land on each square only once.)

Well, before the author understood the math behind this problem, he built this FileMaker database that attempts to discover the answer using the “brute force” method of computation.

Easy as Pi
The Go Players Database is a little tool for keeping track of go board games that you’ve played. BeatleBase helps you keep track of all your Beatles-related collectibles.

Restaurant POS
At one point the author toyed with the idea of making a touch screen–operated POS system for the restaurant industry, and this is as far as he got. Though not a game, it’s still fun to look at. Open FlorPlan.fp5 to see the screen that the host or hostess would use to seat guests and manage tables on their touch-controlled monitor. (Click a table to change its status.) The TableTurnOver.fp5 database captures turnover time.

Old English Pro
At one point the author wanted to become a fluent speaker of Old English, the language of Beowulf. This database was his attempt to build himself an Old English driller and study aid.