Log in to the “Darn Good Security System” by launching the LaunchDev.fp5 database and entering the ckubica user name and -wwww1111- password. The databases should not be hosted by FileMaker Server at this time.

Once the whole solution is open, go to Edit > Preferences > Application > General tab. Make sure that your preferred networking protocol is selected (probably TCP/IP, the cross-platform standard). Next, cancel out of Preferences and go to File > Sharing. You’ll see this dialog: 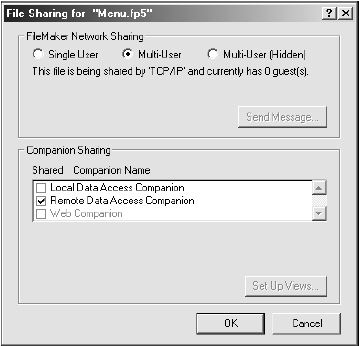 This dialog also shows how many connected guests there are. By using the Send Message button you can send a message to all users currently connected to the database (like “LOG OFF. I need to add the gWhereAreTheMoles? global field!”).

The Companion Sharing box at the bottom of the File Sharing dialog allows you to turn on and off (and configure) plug-ins that enable still other types of database sharing such as ODBC, Web Companion, and FileMaker Mobile companion sharing.

LogOn as a Guest
This solution is basically ready to be shared. In fact, it is being shared to your local network simply because it is open with a network protocol selected and functioning, and because its sharing settings are set as a Multi-User selection.

If you have a relatively simple network, you should see the name of the server computer at the top, with the Menu.fp5 database listed beneath it. On the guest computer, double-click the Menu.fp5 database, enter the master password -IOERROR679Q-, and you’ll log in to the database system as a guest of the server computer. Now there are two people using the database system at the same time!

Hurray! Go back to the server computer and send your one remote user (yourself) a message via the File Sharing dialog. Cool!

Opener Databases
As you know by now, the “Darn Good Security System” database solution has a few opener databases too, which can be used to launch into the system. These are meant to reside on the guest computers, not on the host. When a user doubleclicks their local copy of an opener database, a script within it looks out at the server computer and opens the served database system, bypassing the need for a user to ever see or use the Hosts dialog.

There’s Nothing in the Hosts Dialog (or “I Can’t Log On as a Guest!”)
If you don’t see any hosted files in the Hosts dialog, here’s what to check:

Other Ways to See Available Hosted Databases
There are three options available when you need to select where to look for hosted databases in the Hosts dialog: Local Hosts, Directory Service, and Specify Host. You learned about Local Hosts already. Here are the specifics on what the other two options do.

Directory Service
Your network administrator may be broadcasting the names and locations of your company’s FileMaker server computer (running FileMaker Server) using a directory service or LDAP (Lightweight Directory Access Protocol) Server. If so, you can find and access the server by entering the specifications into the Directory Service dialog as provided to you by your administrator. You can use User Authentication (and Windows Authentication), which ties being able to see a server on the network to your regular network user name or password. This adds a nice additional layer of security.

Specify Host
If you choose this, a dialog comes up asking for the IP address (12.12.12.12) or DNS name (“MYFMPServer”) of the computer serving the databases to others. Enter this information and click OK. You can also permanently add the selected server to your Hosts dialog by checking the “Permanently add entry to Hosts list” box. (To remove this, locate the “fmhosts.txt” (Windows) or “FileMaker Hosts” (Mac) file on your hard drive, open it in a text editor, and edit it.)

Optimizing Database Sharing Performance and Best Practices
The more users logged in to your solution, the more slowly it will run. That’s a given. But also keep the following in mind when hosting a database system to others using FileMaker Pro in order to optimize performance: 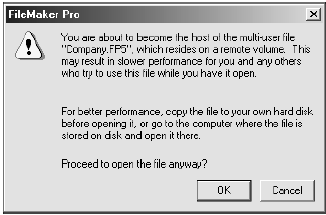 Besides resulting in slower performance, this also creates a much less stable setup: The FileMaker Pro server will crash more often, kicking out guests and potentially corrupting your data or database structure.

You should probably save every two to five minutes. On Windows, you can also specify the cache size that FileMaker Pro will use. The lower the cache value, the quicker the cache will get full and the more often changes will be saved back to disk on the server computer. When the cache value is higher, changes are saved less frequently, and the performance for all guests will be faster. You should allocate at least 7500K to the cache, if you can spare it.

You may notice while sharing a database as a guest that the cursor sometimes turns into a squiggly line with an arrow on each end after you start some script or update a record. This occurs when FileMaker is performing a function or modifying the data that it is sending back to the server. The regular cursor will reappear when the processing is complete. If the server is getting similar requests from many users at once, the cursor may even change to a coffee cup icon, meaning that it is especially busy, and preventing you from doing anything in the database system until it is less so. When you see that coffee cup, the server will process requests from each user in an orderly fashion while preventing the requests (like a massive calculated replace that two users might like to do on the same field in the same set of records, for instance) from interfering with one another. The guest’s view into the database will unfreeze once the server has processed all incoming and outgoing requests.

Functionality Limitations
When you are hosting databases to others and then log on to a hosted database hosted by someone else, there are some limitations as to what the host and guest computer can do with regard to functionality within the database.

If you are at a guest computer, you can:

When you log out and log back in, the guest computer gets all global field values reset to the default (host’s) global field values. Sort orders, print/page setups, and ad hoc export/import orders are also specific to each users. So if User 1 sorts contacts by last name, User 2 can sort contacts by city and state without messing with the sort order on User 1’s or anyone else’s sort order.

Only one user at a time (guest or host) can do the following things:

And only the host computer can do the following things on an open, shared database (and in order to do any of these, all guests must be logged off):